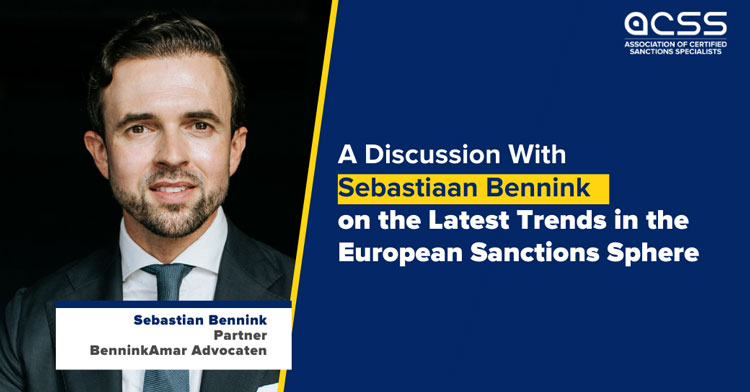 The Association of Certified Sanctions Specialists recently spoke with Sebastiaan Bennink, a partner at BenninkAmar Advocaten. Sebastiaan is a specialist in the field of economic sanctions and export controls, and his legal practice focuses on all aspects of international trade law and related issues, including money laundering, terrorist financing, fraud, bribery and corruption, and other compliance-related topics. Sebastiaan also regularly represents clients subject to investigation and enforcement proceedings.

This interview was a chance to hear Sebastiaan’s incisive perspective on the latest European sanctions trends and the geopolitical developments behind them.

In your opinion, what have been the most important European sanctions trends and enforcement cases of 2020?

There have been many interesting developments this year and it is a hard pick, but a couple of the most important developments in my personal view include, the first designations under the E.U. cyber-sanctions regime, the E.U. confirming its commitment to the JCPOA, the E.U.’s restrictive measures against Turkey for the Turkish oil and gas drillings in the Eastern Mediterranean and also the E.U. taking into consideration to broaden the scope of the E.U. Blocking Regulation in order to counter the U.S. Nord Stream 2 secondary sanctions. In the latter case, the threat of U.S. sanctions precipitated the immediate exit of Allseas, the Swiss-Dutch company contracted to lay the Nord Stream 2 pipeline, halting construction in its tracks. Furthermore, on a member state level, a very interesting development in our day-to-day practice is the stricter criminal enforcement of breaches of sanctions and export controls.

Although we are discussing E.U. developments, of course, these cannot be described without placing them in the broader perspective of developments on the international level. Keeping up with the pace of change, mainly from an U.S. perspective, made it quite the challenge in 2020. One of the key developments in my view, where probably all jurisdictions (E.U., U.K., U.S.) have been involved in this year, relates to China and Hong Kong. This will be an area to watch for the remainder of the year and beginning of next.

An interesting enforcement case in the Netherlands, please note there have been multiple, is a case from February 2020 in which the Court of Limburg imposed a measure of confiscation against two legal entities (Euroturbine B.V. in Venlo and Euroturbine SPC in Bahrain) for EUR 600,000 and EUR 4,000,000, respectively, for a violation of export control-related rules. The financial penalty was based on the advantages the entities obtained because of the illegal export of dual-use goods (i.e. gas turbine components) to Iran, without a license. These measures are the highest confiscation measures imposed for export control matters in the Netherlands to date.

New amendments to the E.U. Blocking Statute were a significant development when they were first introduced in 2018. Over the past two years, how important and effective has this legislation been? Has it changed the behaviour of E.U. firms that conduct business in Iran?

In my personal opinion, I do not believe that the E.U. Blocking Regulation has been very effective to date, even though the E.U. promised a strong and effective response to the re-imposition of the U.S.-Iran sanctions regime, including its Iran secondary sanctions regime. The problem is that parties which should have benefitted from the regulation – primarily individuals and companies wanting to deal with Iran – were confronted with a catch-22 situation. The potential penalties of noncompliance with U.S. sanctions on Iran are so high, including possibly restricted access to the U.S. financial system, that the Blocking Statute has placed E.U. firms with commercial ties to Iran in an untenable position. The document is widely seen as a paper tiger.

We do see a trend that there is more and more case law regarding the interpretation of the E.U. Blocking Regulation.

In April 2020, an interesting ruling was published in the Netherlands regarding the working of the E.U. Blocking Regulation. In this case, the Dutch Supreme Court confirmed that the E.U. Blocking Regulation does not prevent extradition of an Iranian national to the U.S. for their alleged involvement in U.S. export controls and sanctions violations. The alleged violations were related to the violation of the U.S. primary sanctions regime and the facilitation of unlicensed transfers of U.S.-origin dual-use items from the U.S. to Iran. However, this case ultimately had little to do with U.S. secondary sanctions regime, the regime that the EU Blocking Regulation was designed to confront.

In May 2020, the first reference to the European Court to interpret the E.U. Blocking Regulation was made. This was the case Bank Melli Iran v. Telekon Deutschland GmBH.

Moreover, in June of this year, a very interesting French ruling by the International Chamber of the Paris Court of Appeal was published, addressing the impact of economic sanctions against Iran on the validity of an arbitral award. According to the French Court of Appeal, “…the unilateral sanctions taken by the United States authorities against Iran cannot be regarded as the expression of an international consensus, since the extraterritorial scope of the sanctions imposed by the United States authorities is disputed by both the French authorities and the European Union.” The Court ruled that the E.U. and U.N. sanctions regimes form part of an international public policy, whereas the U.S. Iran sanctions regime does not.

This type of case law is much needed, as it contributes to legal certainty regarding the interpretation of the E.U. Blocking Regulation, which subsequently may lead to also a more effective use of the document.

Although the Brexit process is still underway, what is your understanding of the ways in which Brexit may impact European sanctions?

In my personal view, one of the key changes Brexit may bring, is a possible divergence between U.K. sanctions and the E.U. sanctions regime.  The effect of the U.K. no longer being an E.U. member state will be that neither the EU’s Common Foreign and Security Policy, nor the imposition, amendment and lifting of E.U. sanctions will apply any longer to the U.K.

The U.K. has always been one of, if not the, most active and influential E.U. member states in formulating and driving the development of the E.U.’s sanctions policy, including towards Russia and Syria. The U.K. already has called for tougher sanctions in some cases than the currently applicable E.U. sanctions regimes and it cannot be excluded that the U.K. will also look towards aligning its regime with the U.S. It is possible that multinational companies with a presence in the U.K. and the E.U. will face the challenge of having to comply with different sanction regimes post-Brexit.

What are your thoughts on the latest U.K. sanctions developments (i.e. OFSI’s Maritime Advisory; new U.K. Global Human Rights regime)? Do you believe these developments indicate a larger and more active role for OFSI moving forward?

In my opinion, these specific developments could indicate a growing intention of the U.K. sanctions regulator to align its sanctions policy with the U.S. Sanctions are most effective when they are imposed by multiple countries collectively and when those sanctions are enforced simultaneously and effectively by those countries. As a result of Brexit, the U.K. may be inclined to align its future sanctions policy with one of the most active regulators in the world – the U.S. The E.U. has not always been aligned on specific sanctions regimes and the enforcement of its sanctions regime, primarily because of multiple member state national (political) interests.

Another development which shows an increasingly active role for OFSI is the Global Humans Rights Sanctions Regulations 2020, which came into force on 6 July 2020. Not only was the new U.K. regime published, but OFSI took immediate action to list certain individuals as sanctioned, mainly targeting Russian and Saudi nationals. This shows that the U.K., through the OFSI, is bound to implement an independent, comprehensive sanctions policy that may very well deviate from the E.U.’s foreign policy agenda.

Which developments should compliance officers try and keep an eye on in the next year?

On an international level, it will be interesting to witness how the current U.S. administration, if still in power after the upcoming Presidential elections, will continue to use its political and economic power to enforce its foreign policy. The Trump administration has frequently wielded sanctions and export controls to exert the country’s economic influence over adversaries, including China, Venezuela, and in applying its politics of ‘maximum pressure’ towards Iran. Compliance with the U.S. sanctions and export control regime remains of major importance despite a global pandemic.  Companies operating across international markets should therefore remain cautious.

In addition, we see countries such as China, Russia and Turkey expanding their own political agenda, which subsequently ‘forces’ the U.S., but also the E.U., to respond with additional restrictive measures. China is driven by its ‘Made in China 2025’ policy, a state-led industrial policy that seeks to make China the global leader in the high-tech industry, which is viewed by the U.S. and other Western countries as a major threat to their own tech industries. Russia has continued to expand its influence over former Soviet territories, and Belarus, in the midst of a political turmoil, appears to be its next target. Russia’s de facto annexation of Crimea has exposed the E.U.’s inability to deter Russian expansion, aside from imposing economic sanctions. Meanwhile, Turkey continues to pursue its search in the east Mediterranean of oil and gas by drilling in Cypriot waters. This is also a development that will probably lead to more E.U. and U.S. sanctions.

BenninkAmar is a boutique firm based in Amsterdam, the Netherlands and is the only Dutch firm entirely specialized in sanctions, export controls and other trade law matters. All of our lawyers have more than ten years of professional experience and have strong track records at large corporate Dutch and international law firms. We offer the same quality of legal services, but are a mean and lean organization capable of offering the same faster and at better rates.

Our client base ranges from multinational listed companies to mid-sized and smaller companies, and includes companies active in the oil and gas industry, steel and manufacturing companies, pharmaceutical and medical companies, and many more industries. We also advise and represent many financial institutions, such as banks, insurance companies and payment service providers. (www.batradelaw.com).

If anyone reading this article wishes to discuss the above topics or has any questions, they can reach out to me at sebastiaan.bennink@batradelaw.com.