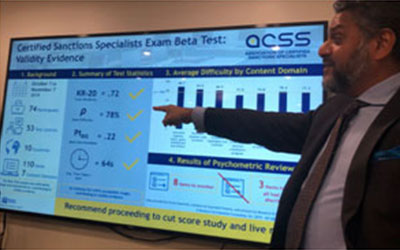 ACSS Achievements 2019 – Launch of CSS Certification; 3rd Annual NY Conference; First-ever Publication on Sanctions Technology Best Practices – and What is on the Horizon in 2020

Since its launch in October 2018, the Association of Certified Sanctions Specialists (ACSS) has grown by leaps and bounds. From adding new member benefits to the maiden voyage of our very first Certification Exam, the ACSS has been hard at work finding new ways to grow and enhance the sanctions community worldwide.

We are now proud to say that have a community of sanctions professionals has grown to over 900 individual members.

For us, 2019 was a banner year, and we would like to take a moment to share with you some of our achievements in the last year as well as a few of our goals for the next.

After a year of concentrated effort by the ACSS Team and leading experts in the industry, the ACSS is proud to announce that the Certified Sanction Specialist (CSS) Examination has finally landed!

Our October-November 2019batch of test-takers became the very first ever Certified Sanctions Specialists, with the CSS distinction now attached to their name.

This follows the ACSS’ launch of its Beta version of the CSS Exam in October 2019 to a limited amount of test takers. The results were subsequently analyzed by the ACSS Certification Taskforce, as well as Dr. Sid,- our psychometrician – to provide an even better, more poignant exam for the wider public.

The CSS exam will be available as of February 2020 at 5000+ testing centers around the world.

To find out more about the CSS Exam, or how to prepare for the Exam with the next Exam Prep Course starting early February, click here: 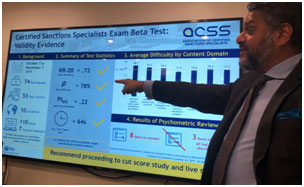 In November 2019, ACSS Certification Task Force conducted a meeting in New York to determine the standard for passing the CSS Exam. All participants worked diligent, long hours to make sure that the CSS Exam only tests the most relevant sanctions topics and maintains a consistent and rigorous standard for the industry.

In 2020, ACSS will continue its efforts to make the CSS Exam the very best testing-tool for sanctions professionals.

ACSS thanks all members of the Certification Task Force for their commitments for giving their support to ACSS in this endeavor!

Hot Topics at the Annual International Sanctions Conference in NYC

TheACSS third Annual International Sanctions Conference took place at the Princeton Club in New York City on October 17th and 18th, 2019. The ACSS Team was joined by a variety of experts from large banks – like BNP Paribas, Citi and Bank of China – to big name corporates – like Microsoft and Uber. The ACSS also welcomed Oliver Bullough, author of “Moneyland” as a keynote speaker, who engaged the audience with a discussion regarding the varied ways bad actors moves money around the world.

The Conference featured a number of panels discussing the very latest topics in sanctions compliance, including: two Government panels (one focusing on regulatory expectations and the other on investigations), a Sanctions Evasion panel, as well as a panel on the Cross-sectional Exposure between AML, sanctions and high risk PEPs. The Conference also included a “Is this Legal” panel, where our legal experts discussed a few legal pitfalls involving Cuba, Venezuela and other complex issues.

Our popular roundtables also made a return, where attendees discussed hot topics like Sanctions Compliance in Correspondent Banking; Iran Sanctions, or Dealing with False Positives, each led by a top expert in the industry.

Don’t miss the next ACSS International Sanctions Conference in NY, taking place on October 20-22, 2020in NY.

Alternatively, if you are based on the Continent, check out ACSS’ first-ever European Sanctions Conference, being held in Amsterdam, the Netherlands on May 15, 2020.

For over a year, the ACSS Sanctions Innovation and Technology Task Force (SITT) has been working hard, led by Chair Joseph Bognanno of Accuity, to create the first ever Sanctions Technology Best Practices Book. 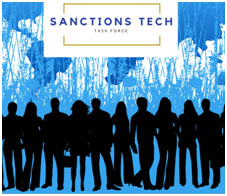 The Best Practices Book will be the first of its kind in the industry and feature everything from “Regulatory Guidance and Expectations” to “Tech Readiness and Roll Out”, written by experts in the industry. Look out for the Book in March 2020!

In addition to SITT, the ACSS has also added the Editorial Task Force, made up of sanctions compliance and legal experts hailing from the U.S., U.K., Europe, and Canada. Our Editorial Team has been fast at work since April 2019 contributing to our Sanctions Blog with all the latest news in sanctions.

Be sure to check out these, as well as other exciting Task Forces on the horizon in 2020.

In addition to monthly webinars (and other member-only benefits), ACSS members will now get a chance to sign up for monthly Sanctions Connect Calls. This new feature is an opportunity for ACSS members to join-in on a lively discussion with experts in the sanctions industry on current hot topics in sanctions. The expert(s) will start by setting the stage and then participants will be invited to contribute to the conversation and ask any questions they may have.

This month’s Sanctions Connect call will cover the latest developments on U.S. sanctions against Iran. Space is limited to 30 individuals per call and 2 per organization, so sign up for this month’s Call as soon as you can!

Not an ACSS Member, click here for more information or join now.

Meeting on UN Sanction Implementation for the Financial Sector in NYC

On May 13, 2019, the ACSS helped coordinate and participated in the second Informal Meeting on Financial Sector Implementation of United Nations Sanctions, held in the UN headquarters in New York.

The meeting was opened by Ms. Hasmik Egian, Director, Security Council Affairs Division Department of Political and Peacebuilding Affairs of the United Nations and attended by vital members in the sanctions community, including participants from the private sector, UN Panel of Expert members and academics.

In 2020, ACSS is exploring the opportunity to host a similar meeting in London focusing on maritime shipping. Are you interested in contributing to the next Meeting on UN Sanctions Implementation? Please send your bio to helpdesk@sanctionsassociation.org.

Last but certainly not least, the ACSS has welcomed two new Team members in 2019: Nestor Castilla and Natasha Bright. 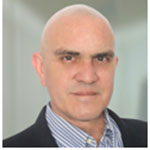 Nestor joins the ACSS Team as a Membership and Affiliate Liaison, where he mans the ACSS helpdesk and answers any questions or concerns that ACSS Members may have.

Nestor is experienced in engaging and evaluating EFL learners in virtual platforms. Prior to joining the ACSS, Nestor worked in the travel industry sector developing specialized programs.  He began his professional life in non-profit organizations involved in rural ecological and economic development in Peru. He has earned a BSc. in Aviation Management from Embry-Riddle Aeronautical University, Daytona Beach, FL. 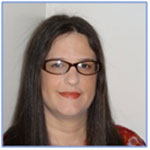 Natasha joins our Editorial Team as a Content Writer, where she regularly contributes to our Sanctions Blog on issues affecting the sanctions community. Look out for Natasha at your next Webinar, as she will also be taking on the duties of Moderator from time to time.

Natasha has a background in compliance, education and health topics. Her experience also includes research, web content and marketing. Natasha has a History degree and voracious appetite for books on politics and economic policy.   She lives in Western North Carolina with her husband and two children.