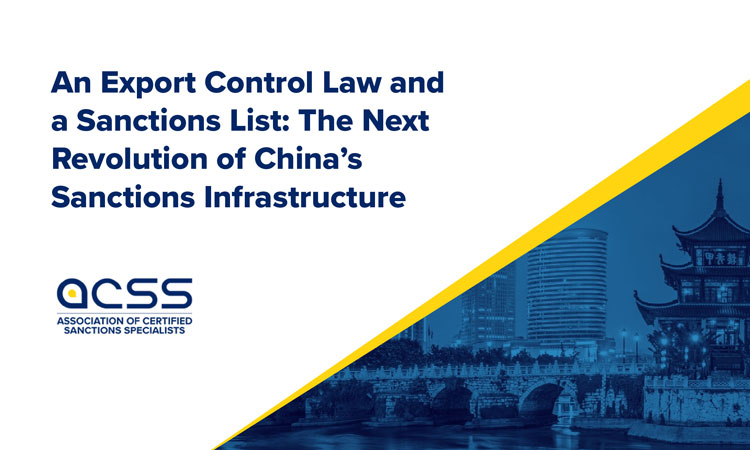 An Export Control Law and a Sanctions List: The Next Revolution of China’s Sanctions Infrastructure

In response to U.S., U.K., Canada and E.U. sanctions against China, China’s Ministry of Foreign Affairs (MOFA) has, since 2020, announced sanctions of their own. Said sections are levied against several individuals and entities in the US, Canada, E.U., and U.K.

China has yet to clarify the sanctions measures in these announcements, and at times has yet to provide a detailed list of sanctioned persons.

However, to support its sanctions, China’s Ministry of Commerce (MOFCOM) has begun to create a sanctions infrastructure, including a sanctions list, a unified export control regime, and a blocking statute.

For this reason, companies that do business or have supply chains in China should carefully follow the developments and consider compliance measures associated with possible sanctions risks.

China has been more consistent in providing lists of sanctioned individuals in their most recent announcements.

The sanctions commonly refer to a prohibition of sanctioned individuals from entering the Chinese mainland and its territories, and from conducting business.

The definition of what constitutes “business” remains undefined.

In addition, in October 2020, a number of U.S. companies, including Boeing and Lockheed Martin, were sanctioned for their involvement in the sale of arms to Taiwan.

MOFCOM has begun to create sanctions infrastructure that could better support future regimes. In quick succession during the latter half of 2020, MOFCOM created the following three sanctions-related tools:

The legal basis for these tools, and for potential future regimes, is found in China’s Foreign Trade Law (article 16 and 17) and the National Security Law (article 37 and 59).

Despite this legal basis, it remains unclear how these tools would apply, since the measures, enforcement activities, and the penalties for each tool are broad in application and include vague descriptions.

The list is intended to deter parties from engaging in business relations with entities or people on this list.

The UEL provisions provides the Chinese Communist Party’s Central Committee and state organs with a ‘working mechanism’ when deciding to designate foreign entities or individuals.

The grounds for being included on the UEL are outlined in Article 2 of the provisions. They are as follows:

These grounds for inclusion in the UEL are described further in Article 7:

Notably, no formal designations have yet been made, nor have any foreign entities been added to the UEL.

Designation on the UEL cab subject a foreign entity to the following restrictions and prohibitions, as detailed in Article 10:

Note that the restrictions for entities or persons on the UEL are broader than those on a list with a similar name: the U.S. Department of Commerce’ Entity List. The Entity List only subjects entities to additional licensing requirements for items subject to U.S. Export Administration Regulations.

While no foreign entities have yet been listed on the UEL, its broad scope and application will make it difficult for foreign businesses to decipher what they can do while already complying with other sanctions regimes.

It remains unclear as to which government bodies might oversee these actions.

In the month following the publication of the UEL, MOFCOM announced the creation of its first comprehensive framework for an export control regime: The People’s Republic of China’s Export Control Law (ECL).

Effective December 2020, the ECL is effectively a consolidation of the various laws that governed China’s export restrictions concerning military goods. The ECL builds on these pre-existing laws to govern dual-use, military, and nuclear goods, in addition to, “…Other goods, technologies, services and items relating to the maintenance of national security and interests an compliance with international obligations.” This definition includes data such as, “…Technical documentation relating to the items.”

The ECL broadly defines its “controls” as regulating and restricting the:

Notably, these controls are to be administered by a collective of Chinese government departments referred to as the “State Export Control Authorities.”

While the ECL calls for a unified list of controlled items from all Control Authorities, there are currently twenty-five export control lists. No new lists have been issued since the promulgation of the ECL.

The ECL also poses extraterritorial implications in that entities outside of Chinese territory that endanger national security or “obstruct” international obligations can be held criminally liable in China. Furthermore, the ECL broadly states that penalties will be issued to any third-parties deemed to facilitate ECL violations. Penalties for violating the ECL includes criminal persecution, fines, confiscated goods and export license bans.

In terms of licensing, the ECL stipulates that exporters are responsible for seeking a license for both controlled and uncontrolled items that they should or “ought to know” might be “endangering national security” and Chinese interests. Details of end-users and uses are part of this consideration and will need to be provided when applying for a license.

“Since the ECL came into effect on Dec. 1, 2020, this Update Guideline can be seen as an extension of the ECL; it provides further clarifications and explanation to multinational corporations in China to adopt a risk-based export control program to meet the ECL.”

In January 2021, MOFCOM published Rules on Counteracting Unjustified Extra-territorial Application of Foreign Legislation and Other Measures (Blocking Statute) — a directive aimed at counteracting the effects of U.S. secondary sanctions.

U.S. secondary sanctions refer to measures taken by the Office of Foreign Assets Control (OFAC) to restrict the activities of foreign entities outside of U.S. jurisdiction. For example, OFAC’s secondary sanctions can penalize third-country entities for conducting business with U.S. sanction targets.

In practice, Chinese entities, such as Huawei, have been severely impacted by U.S. secondary sanctions because third-party entities will not conduct business with them so that they are not subject to secondary sanctions. For context, a third-country entity who engages with a U.S. sanction target could themselves be added to OFAC’s Specially Designated Nationals (SDN) list. This deterrence effectively restricts the foreign market access that Chinese entities can access.

The Chinese Blocking Statute is broad in terms of what it considers to be an “unjustified extra-territorial application of foreign legislation and other measures.” Article 6 of the Statute stipulates what will be assessed in making this determination:

If foreign legislation is deemed to be unjustified and extra-territorial based on the criteria above, a prohibition order will be issued.

With regard to enforcement, Article 4 of the Blocking Statute proposes the creation of a “Working Mechanism.” Similar to the proposition made in the UEL, MOFCOM will oversee the application of this mechanism and is responsible for issuing prohibition orders.

Chinese entities who comply with foreign legislation subject to a prohibition order might be pursued in court on basis that the actions of the entity “infringes upon the legitimate rights and interests” or “causes losses” to a citizen/legal person, or organization of China. In such a circumstance, pursuant to Article 9, the entity in question might be required to provide compensation to the person who incurred the losses. In addition, Article 13 states that should a Chinese entity fail to comply, they will be subject to a fine “according to the severity of the circumstances.”

The Blocking Statute broadly mentions support for Chinese entities who comply with the prohibition order and consequently incur damages from disobeying the foreign legislation in question. Article 11 states that should a Chinese entity incur “significant losses resulting from non-compliance with the relevant foreign legislation…” the Chinese government departments may provide “necessary support” based on the circumstances. Article 12 of the statute stipulates that the Chinese government may take “counter-measures” as needed against the foreign legislation in question.

As mentioned in Article 15, the Blocking Statute does not apply to international agreements of which China is party to.

Despite being subject to a variety of sanctions regimes over the past two decades, China has experienced significant growth and has become a global economic superpower. It’s thanks to this growth that China has leverage to implement sanctions regimes of its own in response to continuous economic pressure from the West.

However, with MOFA having yet to adequately define enforcement measures, penalties, and legal footing, its clear that China’s sanctions are premature in posing any tangible consequences to foreign businesses. Never mind the fact they don’t appear to be using the tools within the infrastructure that they’ve developed. The ambiguity of Chinese sanctions might be purposeful as to not ruin potential trade/investment deals, such as the Comprehensive Agreement on Investment (CAI).

Nonetheless, China’s toolkit should not be underestimated. Once the proper mechanisms are put in place, China could have the capacity to significantly disrupt foreign corporations operating within their jurisdiction. For the time being, however, these implications have yet to be realized.