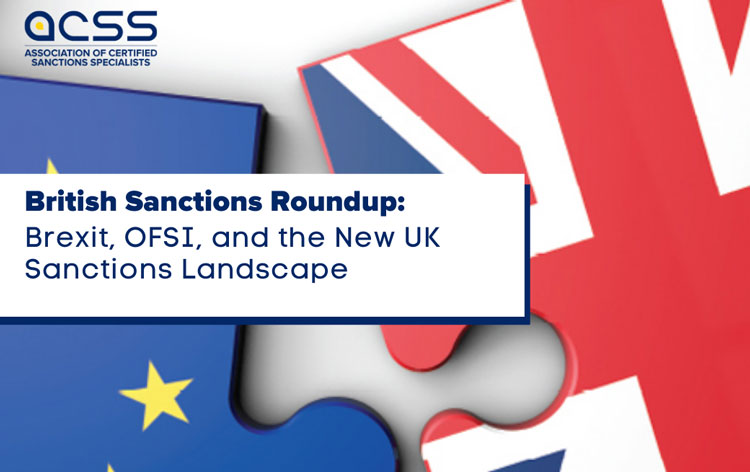 With negotiations between the U.K. and E.U. coming to a head just in the nick of time, members of the European business community eagerly await how the new Brexit deal may impact trade, finance, and sanctions regulations in the coming year. From a sanctions perspective, much has already been deliberated and decided upon already. Consequently, there are a number of assumptions that sanctions professionals can make and use to ease the Brexit transition, regardless of whether a deal is made or not.

With much to discuss, the ACSS’s London Chapter had the privilege of hosting a conversation between Maya Lester QC of Brick Court Chambers, and Chloe Cina, of Deutsche Bank, in a webinar on December 10th. The conversation between these two experts provided excellent insight into Brexit, the new U.K. sanctions landscape, the increased responsibility of the Office of Financial Sanctions Implementation (OFSI), and a review of U.S. sanctions policy in 2020.

The Implications Posed by Brexit

The end of the Brexit transition period marks the arrival of the U.K. on the world stage as a sanctions actor and is indeed another jurisdiction for sanctions professionals to cover. There are a number of implications that must be taken into consideration.

Firstly, it’s important to highlight that, like other E.U. member states, the U.K. was never itself responsible for sanctions policy. While the U.K. has undeniably carried significant influence in E.U. sanctions policymaking, it was never making unilateral decisions. Consequently, the Brexit referendum results prompted the creation of the Sanctions and Anti-Money Laundering Act (SAMLA) – the piece of legislation granting the U.K. power to impose sanctions, in place of the soon to be repealed European Communities Act.

Despite SAMLA already having passed in Parliament, E.U. law remained applicable until the end of 2020. On January 1st, however, all regulations that had been enacted through SAMLA, including regulations for each E.U. and UN sanction, came into effect. With guidance for each of these regulations already released, their consequences are generally predictable.

On December 31, 2020, the UK published the updated UK Sanctions List. This list is different from the E.U. consolidated list. The U.K. list has currently 109 less people, and 4 less entities on it than the E.U. list. So, these 109 people and 4 entities are no longer subject to an asset freeze under U.K. legislation. The list can be found here: https://www.gov.uk/government/publications/the-uk-sanctions-list

How to Prepare for a U.K. Sanctions Regime

According to the panelists, in general, it is best for U.K. businesses to take a conservative approach when assessing if their actions fall under the jurisdiction of a U.K. nexus, and should obtain a license from OFSI to remain compliant. This is a safer, less time consuming and less resource heavy precaution than conducting a case by case analysis.

There is a significant amount of material that U.K. businesses, their compliance officers and risk managers, can refer to. The regulation guidance shared on OFSI’s website is helpful, and U.K. Finance’s collaborative review is an especially useful resource in providing a regime by regime analysis. For small to mid-size businesses, who might not be familiar with, nor have the capacity, to address the impact of a U.K. nexus and sanctions in general, it will be crucial for them to rely on the expertise of the financial institutions that they work with who’ve already prepared for Brexit.

From her own experience at Deutsche Bank, Chloe Cina gave three examples of key areas that she addressed ahead of Brexit.

The first indicator is past action by the E.U. The U.K. has historically been at the forefront of sanctions foreign policy within the E.U., with roughly seventy-five percent of E.U. sanctions being driven by U.K. policy. E.U. regimes are therefore an important indicator of how the U.K. plans to move forward.

Secondly, the U.K. has already begun enacting sanctions policy. This past July, the government introduced new Global Human Rights Sanctions Regulations and immediately sanctioned forty-nine individuals for human rights violations. Following the highly controversial Belarussian election, the U.K. designated eight individuals, including Alexander Lukashenko. Both of these actions foreshadow U.K. policy that is to come in the New Year.

Will the U.K. Include Misappropriation of State Fund Regimes?

An important question discussed was whether or not the U.K. would adopt the E.U.’s Misappropriation of State Fund Regimes, targeting the past governments of Ukraine, Egypt, and Tunisia. These regimes have been largely ineffective, having been stuck in E.U. courts because of the difficulty in assessing judicial standards related to fair trial and right to defense, resulting in many of these sanctions regimes being annulled. As Maya Lester QC noted, it will be fascinating to see if the U.K. takes the same approach as the E.U. in terms of judicial review.

A Great Divergence from the E.U.?

The topic of U.K. misappropriation regimes highlights a common question of concern: how far will U.K. sanctions regimes diverge from those of the E.U.? While there will surely be nuances in the future, there is likely to be a large carryover of E.U. sanctions policy to the U.K. for two reasons.

Both E.U. and U.K. policymakers understand that sanctions are most effective when enacted, implemented, and enforced in unison. So long as this understanding is maintained, it is likely that coordination will continue. Secondly, while the U.K. will no longer seated with E.U. member states, they will still be able to maintain their bilateral relations and coordinate their respective regimes just as they have with other sanctions actors not part of the trading bloc, namely the U.S. and Canada.

In general, the U.K. has already adopted E.U. sanctions regimes, reiterating them to fit U.K. legislation. In terms of lists, with a few exceptions, most E.U. targets became U.K. targets as well. While these features point to a maintenance of the status quo, it’s worth emphasizing that thanks to Brexit, the U.K. will be unencumbered by the diverging interests of the twenty-seven E.U. member states, which require a lot of political capital to pass regulations. A great example of the U.K.’s newfound autonomy and subtle divergence from the E.U. in play, is their human rights regime.

With pressure to join the U.S., Canada, and other jurisdictions to get tougher human rights violations by enacting sanctions regimes, the U.K. was able to act swiftly ahead of the E.U., while still being subject to E.U. law, and publish their regulations and lists. While the E.U. has passed their own regime, they have yet to make their list. While both the U.K. and E.U. offer a wide-ranging definition of who can be designated, perhaps surprisingly, the human rights violations defined by the U.K. are far smaller in scope than those of the E.U.. Furthermore, the U.K. takes into consideration not only the involvement of the person listed, but calls into question whether or not the listing is appropriate, relating to the purpose of the regime and the significance of effect on the person. As Lester described, this reflects a proportionality analysis that is uncommonly used.

The actions taken by the U.K. concerning its human rights regime, and it’s divergence in policy from the E.U. on the subject, highlights one of the few but greatest opportunities to come out of Brexit: the opportunity for OFSI to rise as a sanctions authority and allow the U.K. to become a more nimble policymaker.

Brexit will expand the role of OFSI, bringing a host of new opportunities – chief among them being OFSI’s newfound ability to create and grant licenses.

Having licenses granted within the E.U. is burdensome, requiring a significant amount of political capital to converge the interests of all member states. Thanks to Brexit, OFSI now has the opportunity to replicate OFAC’s ability to autonomously grant licenses as needed at will. Moreover, as a license issuer, OFSI will be able to better monitor trends and grant general licenses to quickly satisfy demand, rather than await consensus by other states as they did within the E.U.

Brexit also provides OFSI the opportunity to become a more responsive regulatory body, like OFAC, in terms of outreach and guidance. It’s important to remember that the E.U. does not have central user-facing body, such as OFAC, that can be contacted for guidance and outreach. As Lester notes, this burden will now be put on OFSI for U.K. sanctions regimes.

Two other opportunities for OFSI includes it’s relationship with the U.K. parliament, their committees, and judicial review. Stipulated in SAMLA is the U.K. Government’s mandate to monitor and report on the effectiveness of their regimes. As Maya Lester notes, it will be interesting to see if parliamentary committees will play a meaningful role in this regard, never mind take interest. Concerning judicial review, the U.K. courts have an opportunity to build from and improve the review of sanctions listing.

Under the E.U., such reviews are conducted by the court in Luxembourg where review is limited and is extremely difficult for those unlawfully listed to be delisted – not the least of which because witness statements on behalf of the accused were commonly unaccepted. It will be interesting to see whether or not the U.K. courts take the same approach or seek to improve the process.

While the opportunities for OFSI are clear, they will require a significant number of resources to properly execute and reap the advantages. An as an independent actor, a significant portion of these resources will need to be allocated to facilitate OFSI’s increased responsibility of overseeing sanctions enforcement.

OFSI on the Enforcement Front

In 2017, OFSI was permitted to impose civil penalties for breach of financial sanctions but has had slow start, in part, due to poor resourcing and the desire to tread carefully since any action undertaken would place challenge.

OFSI has only taken four enforcement actions to date, and as Chloe Cina described, they have not been all that impressive. Of these actions, OFSI did show its teeth by imposing penalties on Raphaels Bank and Travelex. A significant turning point, however, was OFSI’s enforcement action against Standard Chartered Bank, resulting in a penalty of £20.4M.

While encouraging, it’s clear that, for the time being, OFSI’s limited resources are being allocated towards guidance and licensing and is not demonstrating the level of enforcement typical of regulatory body.

Developments Across the Atlantic

It’s been another exciting year for U.S. sanctions, shaped in particular by relations with both China and Hong Kong. While the sanctions proposed against WeChat and TikTok ultimately fell through, a number of other actions have been taken place by OFAC against China.

Aside from sanctions, OFAC has also issued several insightful advisories, including:

As Joe Biden’s inauguration approaches, it’s likely that the Trump Administration will continue to push Biden in difficult foreign policy positions that will be challenging to unwind. Already, it unlikely that the incoming administration will be able to untie sanctions against Russia or be able to rejoin the Joint Comprehensive Plan of Action (JCPOA) related to Iran.

With that being said, there are some positives worth highlighting. Firstly, the Biden administration is expected to be more predictable – both in terms of policy and staff, meaning sanctions professionals and members of foreign governments can assume a degree of consistency when collaborating. Consequently, increased coordination with international partners, including the U.K., is another expectation to come in 2021.

Would you like to keep up to date on UK sanctions issues? Click here to learn more about our London Chapter and upcoming events.