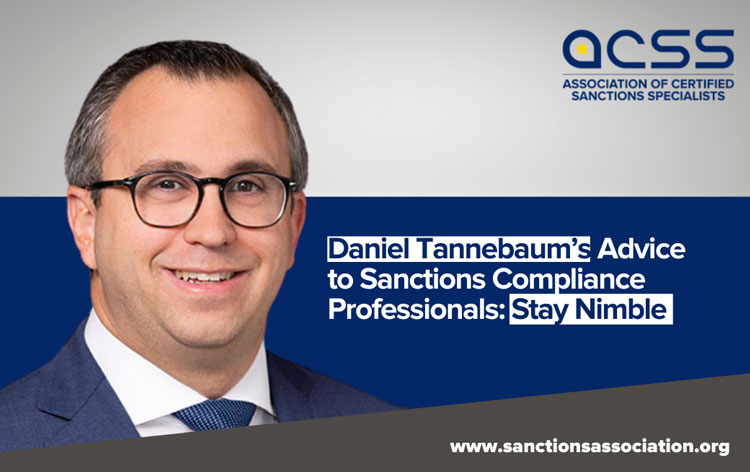 The use of sanctions as an international regulatory and compliance tool has risen exponentially in recent times. These sanctions programs’ increasingly complex nature has led to the need for qualified persons equipped with the knowledge to tackle the day-to-day compliance and operational duties brought on by the ever-changing rules that govern sanctions policy.

To gauge a real-life perspective of those in the business, the Association of Certified Sanctions Specialists (ACSS) has taken the time to ask sanctions professionals what they think is the best way of breaking into the sanctions field and how they see the future of the sanctions industry unfolding.

For this Member Profile, ACSS had a conversation with Dan Tannebaum, a Partner, Americas Anti-Financial Crimes Leader & Global Head of Sanctions at Oliver Wyman. He has also been a speaker for the ACSS OFAC Essentials Certificate Course. We discussed how his experience at OFAC helps him better serve his clients and his thoughts on sanctions compliance’s dynamic nature.

ACSS: How did you get started in the sanctions space?

Daniel Tannebaum: I fell into the financial crime and sanctions space when I applied to a posting for an exciting role at the Treasury Department’s Office of Foreign Assets Control. In doing that, I tripped down a rabbit hole that I could not have anticipated – that my whole career would be focused on the identification, prevention, and response to financial crimes-related matters.

I began in the compliance outreach and implementation function at OFAC just as the first FFIEC manual was released. I played a role in reviewing the final copy for the OFAC portion of the module. I spoke to trade associations, law enforcement, and banking regulators to explain to them what OFAC compliance was and how to manage enforcement and supervision topically. It was great to serve as one of the mouthpieces for the agency at a time when OFAC was really only beginning to rise in importance.

ACSS: So, what is your role now?

Dan: I’m a partner at Oliver Wyman, and I lead our anti-financial crime practice in the Americas and serve as the firm’s global head of sanctions. So, in essence, I advise multinational companies – typically financial institutions – in dealing with remediation and transformation efforts related to AML, sanctions, fraud, and bribery efforts. I help them design the strategies and approach that will move the organization forward.

I’ve worked in about 25 countries across North America, Latin America, Europe, Asia, and the Middle East. My typical clients are foreign banking organizations that have run into different issues, either with the U.S. or domestic regulators.

Although my work is not limited to financial services, I’ve also worked with oil and gas, aviation, hospitality, leisure, e-commerce, and technology companies.

ACSS: That leads perfectly into my next question: what differences in OFAC compliance do you see across industries?

For instance, one of the hospitality clients that I worked with did millions of transactions a day. It would have been inconceivable to screen every single transaction. So, we just designed a very targeted risk-based approach for how they could manage their sanctions risks while not stymieing the entire business.

Of course, with OFAC’s Compliance Commitments Framework they released last year – which was targeted towards non-financial services business – they have really shifted to putting forth additional guidance.

ACSS: Would you say that OFAC is moving towards offering more specific guidance?

Dan: I think the OFAC compliance framework was a quantum leap forward in providing more guidance and clarification to broader companies regarding how you go about complying with sanctions law. For the financial services world, it was met with a bit of a shoulder shrug. However, for the non-financial services world, it was like finally having something they can operationalize.

Companies always asked me, “Where in the law does it say I have to do this” And I would have to tell them that it doesn’t really “say it” anywhere. Now, I can put the framework in front of business leadership that might not want to invest in building out a compliance program.

ACSS: How does your work in the public sector inform your current role?

Dan: My experience at OFAC and the New York Fed certainly helped color my knowledge of how to communicate with them effectively. Understanding who you’re dealing with in these agencies is critically important to ensure that your message resonates, whether it’s a voluntary self-disclosure, active dialogue related to a settlement agreement, or just general communications to share information proactively.

It has helped me advise clients on managing their expectations relative to the likelihood of enforcement or how long you can generally expect a complex license application to take.

ACSS: You have worked with many global organizations; what are your thoughts on OFAC and extraterritorial reach?

Dan: As you observe enforcement moving more towards the Middle East and Asia, you begin to see other institutions not fully understanding what can and cannot be done through the U.S. and how that may jive with their existing banking practices.

The conflict of law issue is nothing new; it existed in the E.U. for years with respect to antiboycott restrictions on compliance with Cuba sanctions. But, situations like China and Hong Kong sanctions create some complexities for global banks that operate in the US, Hong Kong, and China. It’s challenging for international businesses that find themselves in the middle of Hong Kong-related sanctions on China and China ramping up its entity list because it is impossible to comply with both.

ACSS: What advice do you give to sanctions compliance professionals?

Dan: Stay nimble and quickly address the impact of any changes in sanctions programs on your organization. Ensure that you’re able to have a quick read on what they mean to your business because that’s typically the first question that the Head of Sanctions gets from an organization’s leadership. To be able to do that rapidly is of critical importance to assess any potential exposure.

Also, be aware that economic sanctions are an instrument of the execution of foreign policy strategy. It is super dynamic and changes quite regularly. There can be significant changes, and even the threat of sanctions can cause considerable harm.

I remember when the U.S. threatened Turkey with sanctions a few years ago. I was in Europe with the Head of Sanctions for a global bank, and because of the rumor of Turkish sanctions, their business began looking to see if they needed to divest their Turkish positions. That incident caused market confusion, and a massive sell-off and rapid drop in the Lira value.

There are some significant consequences if you rush to judgment on sanctions programs not just for your organization but for economies more broadly. I’m not saying that sanctions compliance officers can save the global economy. But, if someone can raise their hand and say, “We don’t have anything to worry about with this,” that may save a run on a currency that ends up hurting, not the government or the intended target, but potentially the populace.

ACSS: How do you see the sanctions environment changing in 2021?

You also may see sanctions with more precise objectives. However, the Venezuela sanctions built out in the Trump administration were the first sanctions that had a clearly stated goal – that we will lift sanctions when Maduro cedes power. Never before had sanctions being lifted been so clearly tied to regime change.

Dan: Yes, the ability to rapidly dissect the changing geopolitical climate and how that manifests itself with sanctions and what that means to your organization is so critical. It’s different from anti-money laundering regulations, which have remained mostly static. There have been changes to AML over the last few years, but obviously not as rapidly as we’ve seen with sanctions.

It’s important for ACSS members to continue to remind their organizations of the fact that sanctions are always changing and evolving. It’s a different skill set than folks in the AML ecosystem. While I think that’s pretty well understood, I don’t know if it’s universal.