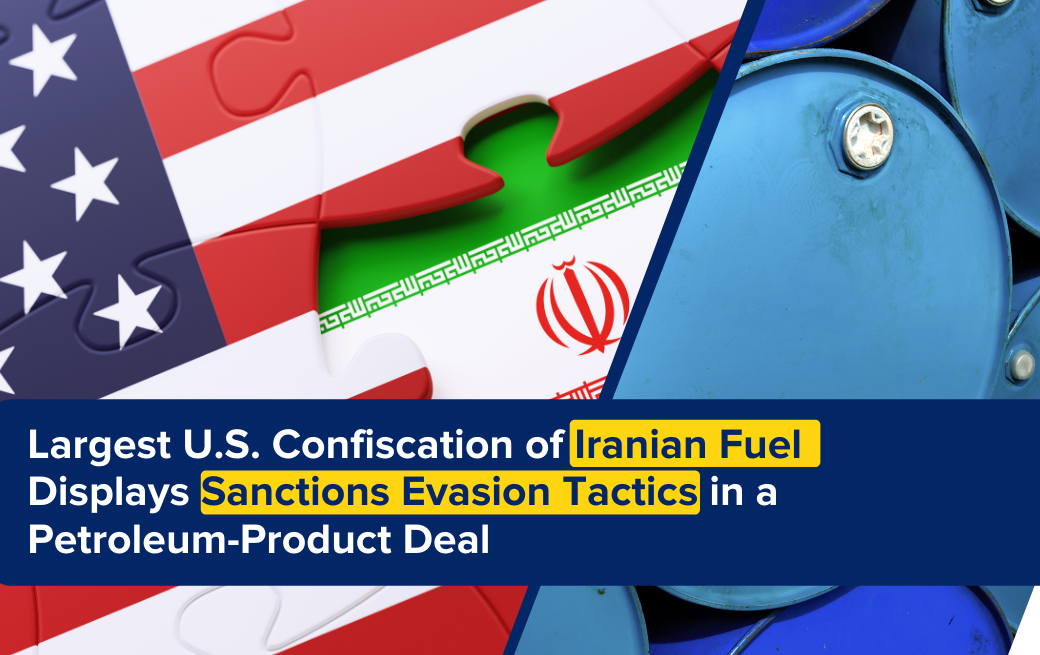 If you are wondering how sanctions evasion works in a petroleum product deal, you should read the recent forfeiture action by the U.S. Department of Justice (DOJ) of four Iranian tankers headed for Venezuela.

This recent action by the DOJ provides good insight on how bad actors may use certain tactics during a petroleum-product deal as well as within the shipping sector to evade sanctions. These tactics can include: using UAE trading companies and intermediaries; Oman-based joint ventures; payment arrangements through European and Turkish banks; as well as false bills of lading and ship-to-ship transfers.

Following a complaint filed by the U.S. Government on July 2, 2020 (the Complaint), U.S. District Judge James E. Boasberg from the District of Columbia issued a warrant to seize all Iranian gasoline on four vessels, involving people connected to the Islamic Revolutionary Guard Corps (IRGC). The warrant was based on a probable cause showing of forfeitability.

As a result, on August 14, 2020, the Department of Justice seized the four tankers that were headed for Venezuela, each carrying approximately 300,000 barrels of Iranian gasoline.

The shipments are alleged to be a source of influence for the IRGC, which has been designated as a foreign terrorist organization as of April 2019, and therefore, an entity subject to U.S. sanctions administered by OFAC.

In granting the warrant, the court relied on both confidential sources and publicly available automated identification system (AIS) tracking data. These resources showed that each of the four vessels loaded their cargo via ship-to-ship transfer, which is a well-known sanctions evasion method.

A Network of Intermediaries

Iran’s petroleum and petrochemical industries are major sources of revenue for the Iranian regime to fund its activities. Crude oil and condensate sold by IRGC-Quds Force originates with the National Iranian Oil Company (NIOC), and IRGC-QF relies on persons embedded within the shipping industry to keep its oil moving by ensuring that vessel insurance and registration are in order.

According to the Complaint, since September 2018, the IRGC-QF has moved oil through a sanctioned shipping network, which features dozens of ship managers, vessels and facilitators. This complex network of intermediaries enables the IRGC-QF to hide its involvement when selling Iranian oil.

The Complaint says that in Spring 2019 alone, one IRGC-QF-led network used more than a dozen vessels to transport nearly 10 million barrels of crude oil, and has taken steps to hide Iranian, IRGC and NIOC involvement in certain transactions. These shipments sold for more than half a billion dollars. The same network also sold nearly four million barrels of condensate and hundreds of thousands of barrels in gas oil, bringing in another quarter billion dollars.

Persons and Entities Involved in the Scheme

At the center of the sanctions evasion web, according to the court documents, is an Iranian individual affiliated with the IRGC – Mahmoud Madanipour. He arranged the shipments on behalf of Mobin International Ltc.

Mobin International is an Iranian petroleum company, operating under the name Rahbaran Petro Mobin Kish. This company changed its name within the past two years.

Both Mr. Madanipour and Mobin International are associated with another UAE-based trading company, identified in the Complaint as “Company 1”.

Mr. Madanipour and Mobin International maintain bank accounts used for IRGC funds. The Complaint does not specify where these banks accounts are held.

How They Did It

The Complaint provides details on the steps the sanctions evaders took in the petroleum-product deal, from setting up the structure, making payment arrangements, getting the documents ready, and finally the voyage to Venezuela.

Step 1: Setting up the Structure

Eventually, according to a letter sent to owners of another vessel (called Vessel 1), the charterer could not obtain the original bill of lading, and thus could not switch: (1) the true bill of lading from NIOC to fraudulent documents purportedly from the Iraqi State Organization for Marketing of Oil; and (2) the consignee from Mobin International to the name of another company.

The letter describing this issue also said that should Vessel 1 be detained as the result of the inability to switch the bill of lading, the parties would be indemnified.

Additionally, a manifest of March 2020 lists the National Iranian Oil Products Distribution Company (NIOPDC) as the shipper of gasoline onboard Vessel 1 and, subsequently, the Pandi, which is one of the ships that was seized in August 2020. The Pandi engaged in a ship-to-ship transfer with Vessel 1 in Port Khalid, Sharjah, UAE to take on the Iranian gasoline.

According to www.balticshipping.com the Pandi is owned by a Greek shipping company, Delfi SA, based in Piraeus, Greece, and sails under the flag of Liberia.

According to the court documents, in January 2020, a UAE-based trading company, called “Company 1,” requested that the owner of the Pandi carry gasoline from Iran to the UAE.

The parties involved in this transportation deal were as follows:

Further, according to the Compliant, on February 27, 2020, the UAE trading company “Company 1” invoiced a company connected to the IRGC, called the Avantgarde Group, for a $14.9 million cash payment for the sale of gasoline aboard the Pandi. Another company, ACS Trading LLC, is based in the UAE and is part of Avantgarde Group.

Note that ACS Trading facilitated the purchase of Grace 1, an IRGC-controlled vessel which was subject to a forfeiture complaint in 2019.

The data from the AIS tracking device revealed further that, in March 2020, the Pandi visited the Sirus Oil Terminal in Iran. AIS data shows that the Pandi engaged in an STS transfer to one of the other seized tankers, the Bella, in April 2020.

In May 2020, the Pandi entered into an agreement to transport Iranian gasoline for Mobin International, The Pandi subsequently onboarded the cargo, approximately 298,484 barrels,  via an STS transfer, ultimately destined for Venezuela.

A text message between Madanipour and a co-conspirator noted difficulties in the voyage for a few of the tankers. The co-conspirator texted “the ship owner doesn’t want to go because of the American threat, but we want him to go, and we even agreed we will also buy the ship.”

Sanctions create large challenges and threats to a country’s economy and its businesses. The stakes are high. As such, as a sanctions compliance professional, you should be prepared for sanctions violators to go to great lengths to evade sanctions.

Here are a few tips to effectively identify sanctions evasion:

A sanctions compliance professional has to be cognizant of the many tactics used by sanctions evaders, This forfeiture showed, for example, how Iran relies on unscrupulous individuals in the shipping industry to keep its oil and related products moving. Further, while ensuring that vessel insurance and registration are in order, they manipulated other documents, where possible, and used STS transfers to disguise the origin of the cargo.

Actively search for novel ways to identify those who may be trying to evade sanctions.

There are commercial products that can help to identify sanctioned entities, and it may be advisable for firms that have any exposure to sanctioned businesses or countries to look into a tool that can assist.