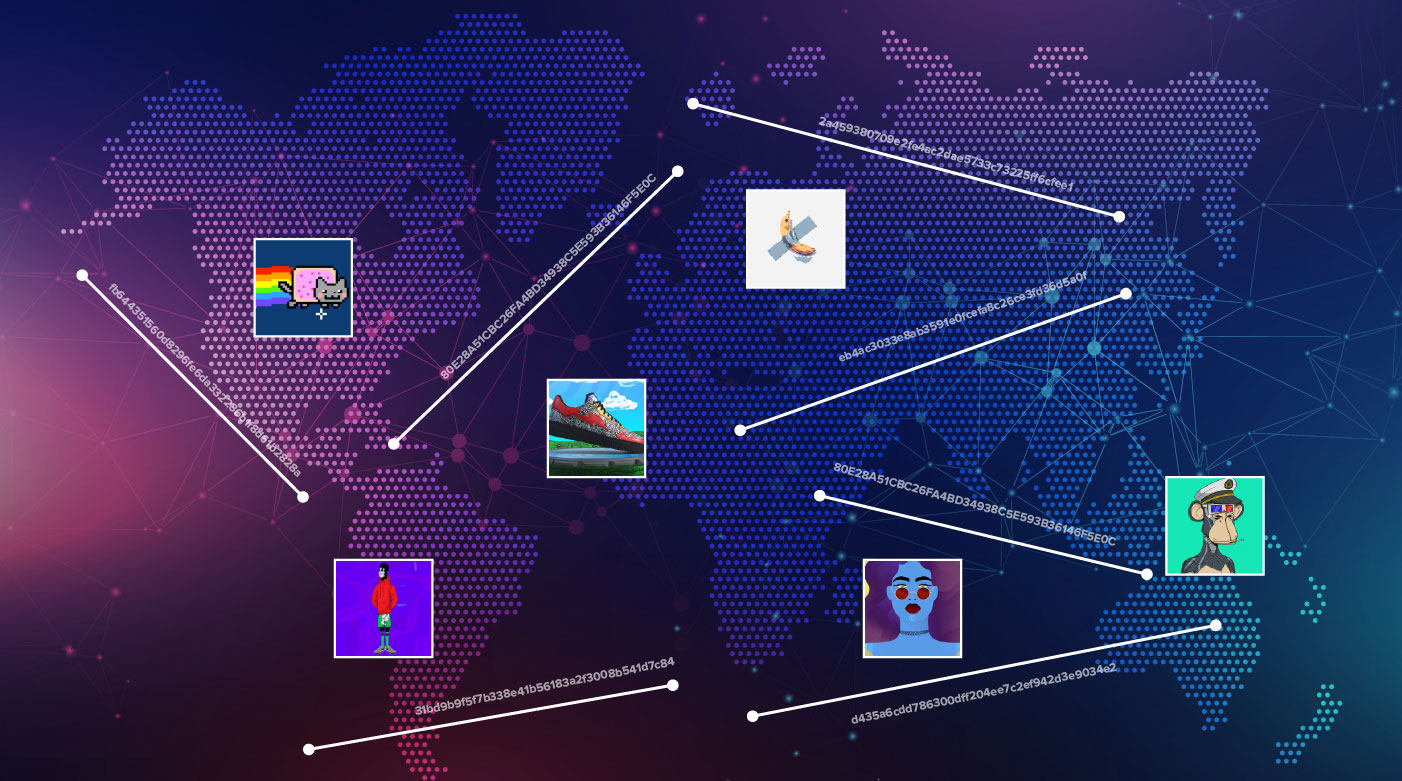 Since the Russian invasion of Ukraine began, sanction programs seem to be updated by the day, if not by the hour. Decentralized finance (DeFi) enabled by blockchain technology may be an avenue for Russia’s government, private sector, and citizenry to alleviate recent sanctions.

The story is similar for many countries affected by substantial sanction programs. Cryptocurrencies enable funds to be transferred anywhere, instantly, without the heavy regulation of the traditional financial system.

Parallel with cryptocurrency are non-fungible tokens, or NFTs. These non-liquid assets allow users to assign a monetary value to digital items for sharing worldwide. Such capability is attractive to nations denied access to traditional financial services.

Governments of sanctioned nations such as Russia, Belarus, and Venezuela are forming strategic partnerships of domestic NFT projects and services. Art and non-liquid assets are vehicles for governments attempting sanctions evasion, and NFTs carry the same potential. The regulatory community must understand how NFTs can circumvent various sanctions.

NFTs and How They Work

NFTs are unique digital identifiers that are recorded permanently on a blockchain. “Non-fungible” is an asset that is not in the form of a currency and does not have an exact exchange rate with other currencies. NFTs most often take the form of digital art pieces, but they can be any digital asset, such as an audio or video file, or a line of code.

NFTs are bought and sold with cryptocurrency on exchange websites, such as Binance NFT, Rarible and OpenSea.

Making an NFT begins with selecting a digital asset for minting and paying with a cryptocurrency for the services of an NFT exchange website. A file is uploaded to the site to turn it into an NFT. The exchange’s servers code the file into the blockchain ledger, and users assign their NFT an initial monetary value by putting funds into it. The NFT can be sold for a set price or in an auction that others can bid on with cryptocurrency.

NFTs enable an evolved form of money laundering using art. Essentially, one party creates an NFT auction for artwork that permits value transfers with the other party who intentionally overbids. An NFT-enabled sanctions evasion scheme could occur like this:

This scenario utilizes a private sector example but can be executed similarly at a government level. 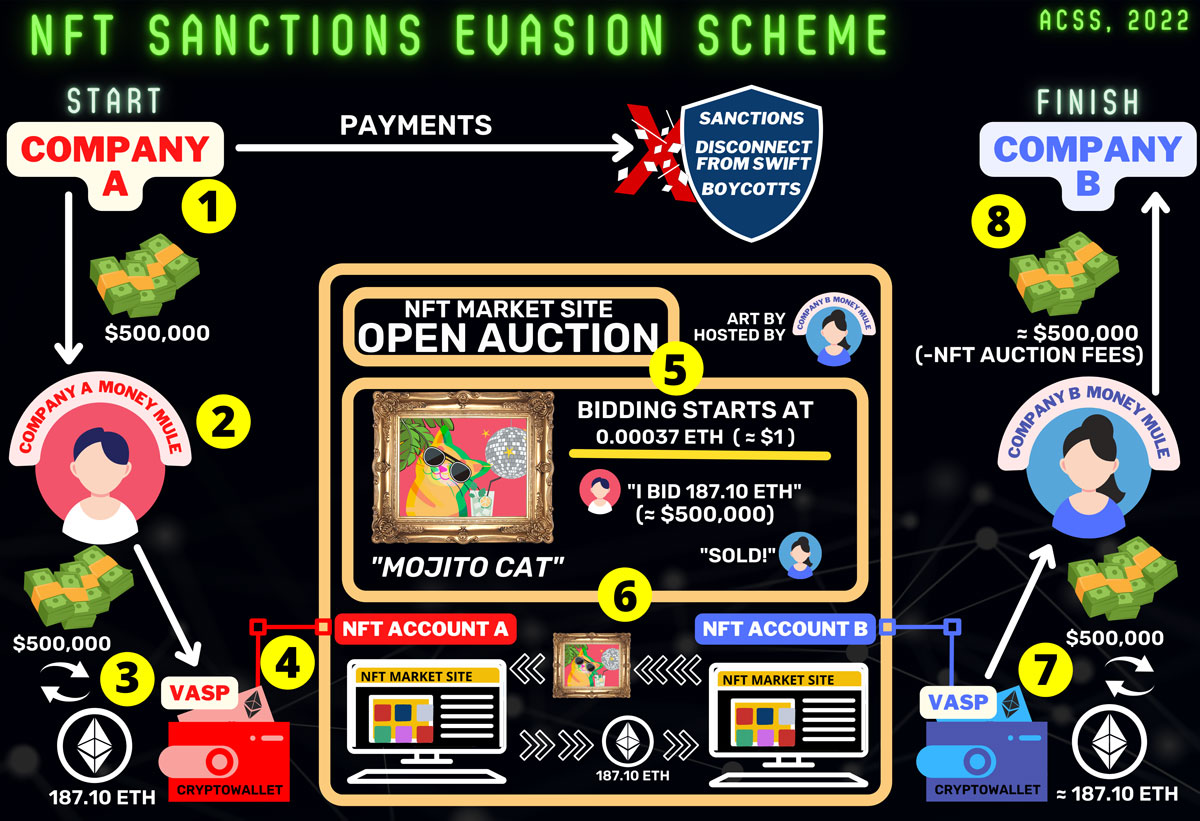 The Russian Federation has a foundation of interest in NFTs from its private sector. Vladimir Kiriyenko, the CEO of the Russian social media group VK, was sanctioned by the US Treasury, with several Russian oligarchs and businesses.

VK, a social media platform widely popular in the Russophone world, announced on February 18 that the platform is launching an NFT marketplace to serve the community of Russian crypto enthusiasts. VK is owned in part by Kiriyenko and the insurance group Sogaz, which owns much of the platform’s shares.

Sogaz is affiliated with the energy company Gazprom, which recently was the target of financial sanctions. Gazprom commands a 57% majority of the shareholder voting structure of VK through JSC MF Technologies (MFT), which encompasses Gazprom, Sogaz, and state-owned Rostec. VK is widely considered to be under the direction of the Kremlin through this Gazprom connection. Although the NFT section of VK is not sanctioned, the venture maintains proximity to many sanctioned persons and entities.

Ukraine has called on VASPs that facilitate the trade of crypto and NFTs to freeze the accounts of Russian and Belarusian users. The NFT marketplace DMarket, which specializes in video game item NFTs, in effect, froze the wallets of all users from Russia and Belarus in response to the invasion of Ukraine.

By contrast, the prominent crypto VASP Binance has stated it will not impede the actions of Russian users, including its NFT service, BinanceNFT. Binance, however, said that Russians cannot use Mastercard and Visa Cards on Binance, as both have halted their services to Russia because of the invasion of Ukraine.

The expansion of protocols and practices of monitoring NFT transactions has gained importance since the increase of US sanctions on Russia. Professor Jason Blazakis of the Middlebury Institute of International Studies, whose research specializations include threat financing, sanctions, and violent extremism, says: “With the financial squeeze on Russia, you better believe the Russian Federation is going to go big into crypto and NFTs.

“Regulators need to watch this space and sanction crypto exchanges that augment Russian conversion of cash assets into cryptocurrency. We have seen North Korea, for example, use cryptocurrency to finance its WMD [weapons of mass destruction] program to get around sectoral sanctions. Russia will do the same; it uses every means,” the professor says.

The Russian ruble’s value has decreased by nearly 30% against the dollar since the beginning of the invasion of Ukraine. The Russian private sector and government, which no longer have easy access to financial institutions abroad, are likely considering underregulated financial vehicles as alternatives. NFTs can definitely meet this demand.

Professor Blazakis says the US Treasury needs to “examine” any facilitation of Belarussian and Russian crypto and NFT transactions. He says the entities should be fined if they are enabling transactions between designated individuals or entities.

NFTs Have Gained Acceptance in Belarus

Belarus is considered one of the most cryptocurrency-friendly states in the world. The country’s leadership has been vocal about expanding the public-private cooperation of decentralized finance.

The national Belarusian bank, Belarusbank, has formed a strategic partnership with the VASP Whitebird.io. Whitebird has promoted NFTs publicly as part of a larger goal of providing decentralized financial services.

Although Belarusbank is not sanctioned, several government officials and financial institutions have been because of Belarus’ involvement in the Ukraine invasion. The DeFi community has not been kind to Belarus.

The exchange Binance and its NFT site BinanceNFT do not allow any Belarusians to utilize their services, because of the OFAC sanctions against Belarus. Like Russia, Belarus’s government or commercial entities may turn to NFT and cryptocurrency to evade sanctions. NFT services with low KYC and lax sanction enforcement will be valuable tools to Belarusian actors.

Venezuela Has Opened Doors to NFTs

Venezuela has faced rigorous US sanction programs, causing individuals and elements of the government to seek out DeFi solutions to mitigate the effects of trade sanctions and inflation. SUNACRIP, or the National Superintendency of Crypto Assets and Related Activities, is the government agency that regulates and promotes Venezuela’s decentralized finance sector.

In 2021, SUNACRIP promoted two official government NFTs on sector website Rarible. Combined, they are estimated to be worth at least $24,750. The works are titled La Orchestra más Grande del Mundo! and 200 años Batalla de Carabobo.

The two NFTs’ release dates and paths of transactions were different, yet they have ended up in the same wallet. The transaction history of the current NFT owner is viewable by the public, but the NFTs themselves have been blocked from viewing by Rarible.

A takeaway from this is that Venezuela’s government, via SUNACRIP, was able to transfer value assets to anonymous persons through non-liquid assets. As the NFT space is underregulated, countries such as Venezuela can find avenues to circumvent sanctions

Many VASPs have incorporated sanctions restrictions into their terms of use, and countries do require VASPs operating within their borders to comply with trade sanctions. Most NFT exchanges comply, but several are unregulated.

Until measures requiring deeper scrutiny of NFT marketplaces are adopted, NFTs will remain a possible tool for sanctions evasion for countries, companies and individuals.