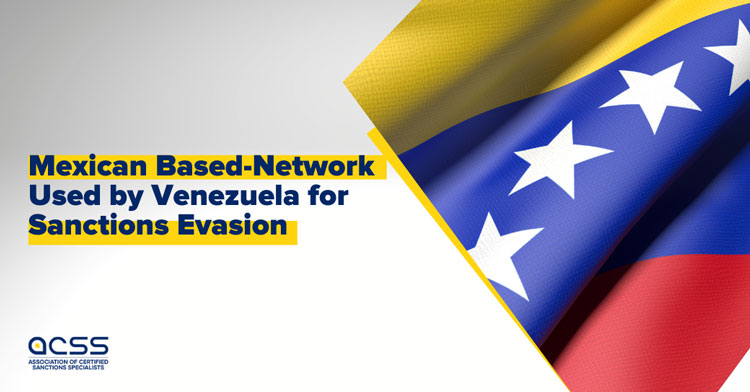 The world over, sanctions evasion tactics are becoming more sophisticated. Petróleos de Venezuela (PDVSA), which was sanctioned by OFAC on January 28, 2019, has been using just such tactics to circumvent sanctions.

Among those evasion tactics was the use of Mexico-based companies in order to trade oil shipments for the specific purpose of circumventing OFAC sanctions against PDVSA.

The Mexico Based Evasion Network

On June 18, 2020, pursuant to E.O. 13850, OFAC targeted Mexico-based companies and individuals involved in schemes to broker the re-sale of over 30-million barrels of Venezuelan crude oil. This constituted approximately 40% of PDVSA’s oil exports in April 2020 for Asian buyers.

OFAC estimates that since 2019, the Maduro regime and PDVSA cooperated with OFAC-designated Alex Nain Saab Moran (Saab) and Leal to circumvent U.S. sanctions. They did so by helping in the sale of Venezuelan-origin crude oil.

On July 25, 2019, Saab, a Colombian businessman, was charged with money laundering in relation to a Venezuelan bribery scheme by the U.S. Department of Justice (DOJ). The charges were related to the payment of bribes to Venezuelan government officials. The bribes were for the purpose of accessing the government controlled exchange rate, with false and fraudulent import documents for goods and materials that were not imported to Venezuela.

The scheme was under a so-called ‘oil-for-food’ program that did not result in any type of food deliveries to Venezuela. The program was intended to be an exchange of oil in the world market for food, medicine, and other humanitarian needs for ordinary Venezuelan citizens.

The scheme did not comply with the general OFAC license in place for the provision of humanitarian assistance in support of the Venezuelan people which only applies to U.S. persons that are not subject to OFAC sanctions and regulations.

Libre Abordo and Schlager Business Group were implementing the scheme by claiming to have corn and water truck delivery contracts with the Government of Venezuela. These goods were ultimately not delivered. According to OFAC, such contracts were subject to inflated prices. The result was a $300-million program that did not match the amount of PDVSA crude oil deliveries being traded by Libre Abordo and Schlager Business Group.

Both companies are based in Mexico City and had no prior experience in the global oil sector before entering into an agreement with the Government of Venezuela and PDVSA.  Libre Abordo was involved in the purchase and re-sale of cleaning supplies, hospital and industrial equipment, and agricultural products, primarily in Mexico. While Schlager Business was primarily involved in business administrative and back-office support services in Mexico.

According to OFAC, the companies tried to replicate the Rosneft Trading and TNK Trading International Venezuelan origin crude oil sales to Asia that were also subject to OFAC sanctions. Libre Abordo used the same buyers in Asia, and it virtually used the same routes and shipment processes. The affiliate of Libre Abordo, Schlager Business Group, assisted the scheme by taking charge of the chartering contracts needed to lift PDVSA crude oil.

Former U.S. Deputy Secretary Justin G. Muzinich stated that, “The illegitimate Maduro regime created a secret network to evade sanctions, which the Treasury has now exposed.” Moreover, the Deputy Secretary said, “The United States will continue to relentlessly pursue sanctions evaders who plunder Venezuela’s resources for personal gain at the expense of the Venezuelan people.”

On the other hand, according to Reuters, the Mexican government’s Financial Intelligence Unit froze the bank accounts of companies and individuals sanctioned by OFAC. However, Mexican President Andres Manuel Lopez Obrador said that he would sell gasoline to Venezuela for ‘humanitarian’ reasons if asked to, despite U.S. sanctions against PDVSA, which could trigger secondary sanctions against Mexico.

Secondary sanctions apply to transactions that are entirely outside of the jurisdiction of the U.S. but seek to sanction specific types of conduct that the U.S. deems particularly contrary to U.S. policy. In this case, global Mexican companies like Petróleos Mexicanos (PEMEX) could be subject to sanctions if they assist PDVSA in the circumvention of OFAC sanctions.

The designated individuals were

Elemento, based in Valletta, Malta, which operates within the global oil sector since 2017, brokered the sale of at least five shipments of PDVSA’s oil on behalf of Bazzoni.

Swiss oil, based in Geneva, Switzerland, acted as the consignee, or the entity financially responsible for the receipt of a shipment, of oil shipments brokered by Elemento. The company was the recipient of at least one shipment of Venezuelan oil to Asia.

Bazzoni together with D’Agostino is a core facilitator of the evasion network. Bazzoni took over Saab’s broker role after his June 2020 arrest in the West African country Cape Verde and is currently facing extradition to the U.S. for money laundering charges. Moreover, he connected Elemento and Swissoil with PDVSA and Saab and is now a fundamental player for the coordination of the Venezuelan crude oil sales from PDVSA.

However, on March 31, 2021, the Biden administration removed OFAC sanctions on entities related to Bazzoni. Two Italian companies were incorrectly targeted with ties to the Venezuelan oil sector.

Other major players in the evasion tactics sanctions schemes are North Korea and Iran.

In the past, OFAC has also targeted North Korea for using entities and vessels to evade OFAC energy sanctions. OFAC designated six entities and identified four vessels related to the transport of North Korean coal. The actions are a response to the transportation and exportation of North Korean coal in violation of UN Security Council resolution (UNSCR) 2371. The actions underscore that entities within the People’s Republic of China (PRC) have continued to engage in activities prohibited under the UNSCRs.

On the other hand, according to Reuters, it is not expected that the sanctions regime against Venezuela and PDVSA will change significantly under the Biden administration since existing sanctions have enough special provisions to allow for humanitarian aid shipments to help Venezuelans cope with economic hardships and the COVID-19 pandemic.

According to Reuters, The Biden administration intends to move away from the mostly unilateral approach of Trump’s ‘maximum pressure’ campaign and enlist more countries to help seek a diplomatic solution for Venezuela.

Finally, to date, Mexico is not assisting in any way PDVSA to trade Venezuelan crude oil and is not subject to OFAC sanctions in this matter.