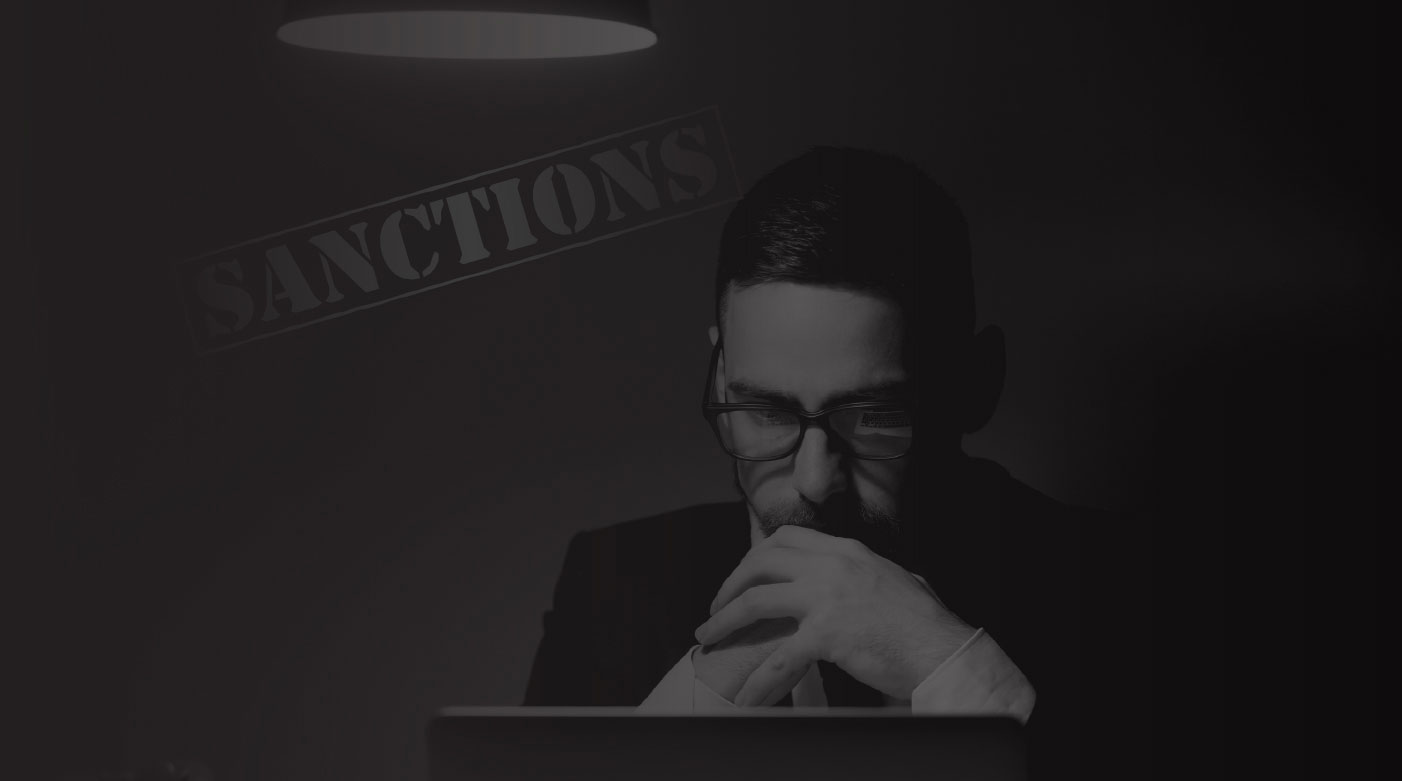 The owner of a catering company in Verona, Italy made a routine trip to his bank one morning only to discover that his checking account had been blocked and that he had been sanctioned by the United States.

Alessandro Bazzoni told the Italian newspaper Corriere della Sera: “I thought it was a joke. Look, it’s February 1, not April 1, I said to the director. But it was all true.”

What had transpired was a case of mistaken identity. On the last day of office, the Trump administration had sanctioned names associated with blacklisted Venezuelan crude oil, including an Italian citizen named Alessando Bazzoni, a “core facilitator” of a network created to evade US sanctions on Venezuela’s oil sector.

The mistaken Mr Bazzoni also owned a pizzeria, but the closest he got to a barrel of crude was filling a fryer with cooking oil.

He said he had been able to solve the problem himself by supplying the US government with personal information. “They didn’t apologize, but that’s not a problem. The important thing is that they removed my name from that list.”

OFAC says its procedure for ascertaining the correct identity is thorough. “In making a listing determination, OFAC draws on information from many sources, including but not limited to relevant United States government agencies, foreign governments, United Nations expert panels, and press and other open source reporting. OFAC investigators then carry out a thorough investigation, including a review of the totality of the information.”

OFAC goes on to say: “The findings and conclusion of that investigation are then documented in a formal evidentiary memorandum that sets out the evidence supporting a determination that the person meets one or more of the criteria specified in the sanctions authority. Before OFAC’s final determination is made, proposed listing actions are subjected to review by the departments of the Treasury, Justice, State, and other US agencies as warranted.”

A firm in Washington DC named Price Benowitz’s OFAC Law Group doesn’t always hold OFAC’s information in as high regard. It says that, as most of OFAC’s designations rely on intelligence reports, the information can be unreliable. “As a result of their mistaken designation they find their assets in the US have been blocked, their accounts closed and their credit cards canceled. People  in major multinational companies have lost their jobs, pensions and access to important property as a result of being placed on the SDN list.”

Nicholas Turner, a lawyer at the international firm Steptoe & Johnson, says some people find it very surprising that OFAC’s information is not always accurate. “We expect the US government to have access to superior information about the people it targets, but that is not always the case,” he told the BBC. “Sometimes, the government is using information that anyone can find online. If that information hasn’t been properly verified, it’s easy for mistakes to happen.”

Apart from mistakes by OFAC and other US government offices, OFAC Law Group says automated screening can be the culprit. “A ‘soft alias’ or ‘soft aka’ can cause a bank or other actor to block assets.”

Entities do rely on OFAC to get its facts right and designate the correct people. But companies still need to perform their due diligence. TransUnion, a credit reporting agency that compiles personal and financial information about consumers’ creditworthiness to create reports for use by entities, paid out more than $40 million in a class action case involving OFAC’s SDN list and mistaken identity.

TransUnion LLC v Ramirez was referred to the Supreme Court on a point of law about what constitutes a concrete injury in order to claim for damages. At risk for TransUnion was a payout in a class action to thousands of individuals whose credit report could have been affected by being mistaken for a designated person. The case serves as an example to all entities to maintain good due diligence practices.

An individual named Sergio Ramirez was denied credit in 2011 to buy a car from a dealer who had based its credit decision on the TransUnion service. The report read: “OFAC advisor alert – input name matches name on the OFAC database.” The car salesman told Mr Ramirez that he could not sell the car to him because his name was on a “terror list.”

The next day Mr Ramirez called TransUnion and requested a copy of his credit file, which he received, along with a document explaining his summary of rights. But there was no mention of the OFAC alert until a later mailing without an additional copy explaining his rights.

Ramirez requested statutory and punitive damages. His claim was for harm in the form of embarrassment in front of his family for being denied credit and a resulting vacation cancellation. Ramirez sought to certify a class of all people in the US  to whom TransUnion had sent a mailing from January 1 to July 26, 2011, similar in form to the second mailing that he received, which did not explain the addressee’s rights. It was agreed that the class contained 8,185 members, including Ramirez, and that 1,853 members of the class (including Ramirez) had their credit reports disseminated by TransUnion to potential creditors during the period.

The District Court ruled that all 8,185 class members had Article III standing, meaning they could be adjudged to have suffered a “concrete harm.,” even if their credit reports had not been disseminated. After six days of trial, the jury returned a verdict for the plaintiffs, who were each awarded $984.22 in statutory damages and $6,353.08 in punitive damages. The total award was more than $60 million.

The decision was affirmed on appeal, but the punitive damages were reduced to $3,936.88 per class member – a total of about $40 million. The case was referred to the Supreme Court. Justice Kavanaugh, delivering the judgment, said: “Only plaintiffs concretely harmed by a defendant’s statutory violation have Article III standing to seek damages against that private defendant in federal court.”  The court ruled that 1,853 class members suffered harm with a “close relationship” to the harm associated with the tort of defamation.

“The credit files of the remaining 6,332 class members also contained misleading OFAC alerts, but the parties stipulated that TransUnion did not provide those plaintiffs’ credit information to any potential creditors during the designated class period. The mere existence of inaccurate information, absent dissemination, traditionally has not provided the basis for a lawsuit in American courts. The plaintiffs cannot demonstrate that the misleading information in the internal credit files itself constitutes a concrete harm.” Arguments for future harm were similarly rejected.

OFAC does have due diligence steps in determining a valid OFAC match. These help to identify which list the “hit” or “match” is on, with contact numbers for relevant list-keepers. If the match is against the SDN list, you continue to the second step to establish the name is a person and does not match an entity or vessel.

If it is a person, step three establishes whether you have a full match with the name, and not just the first or surname. You then compare the complete sanctions entry with all the information you have on the matching name in your transaction.

An entry often will have, for example, a full name, address, nationality, passport, tax ID or cedula number, place of birth, date of birth, former names and aliases. If you are missing much of this information OFAC advises you to get more and then compare it against the entry.

There is an administrative process within OFAC to correct rogue listings. To request removal from any OFAC list, including the SDN list, people can simply write to OFAC by postal mail or email: Office of Foreign Assets Control, Office of the Director, US Department of the Treasury, 1500 Pennsylvania Avenue, NW Washington, DC  20220. For faster delivery, OFAC recommends emailing petitions to OFAC.Reconsideration@treasury.gov.  OFAC cannot accept removal requests by telephone.

Requests should include the listed person’s name and contact person’s name and mailing address (including email address); the date of the relevant OFAC listing action (such as the designation or identification); and a request for the reconsideration of OFAC’s determination, including a detailed description of why the listed person should be removed.

Additional information may also be submitted, such as arguments or evidence that establishes that an insufficient basis exists for the listing or that the circumstances resulting in the listing no longer apply, pursuant to 31 C.F.R. § 501.807, Procedures Governing Delisting from the Specially Designated Nationals and Blocked Persons List.

OFAC does not require the listed person to have a lawyer and accepts petitions directly from listed persons or their representatives. For petitions received via email, OFAC will email an acknowledgment of receipt generally within seven business days.

OFAC does not specify how long the review process will take. It says if it requires further details, it will send its first questionnaire within 90 days from the date it receives the petition. “Review timing depends on a range of factors including whether OFAC needs additional information, how timely and forthcoming the petitioner is in responding to OFAC’s requests, and the specific facts of the case.”

Other countries have mechanisms for removing people from their sanctions lists for mistaken identity and other reasons. Citizens of those countries need to contact the relevant office to ask for the procedure for reviewing the removal of their names.