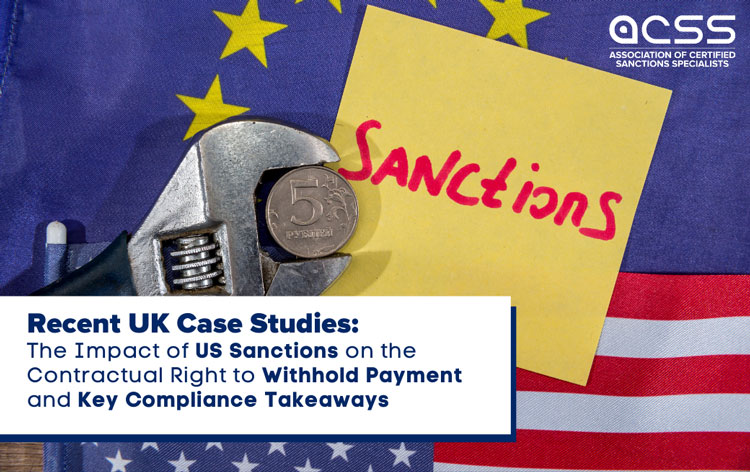 Recent UK Case Studies: The Impact of US Sanctions on the Contractual Right to Withhold Payment and Key Compliance Takeaways

Disclaimer: This article does not constitute legal advice. Legal advice should be sought for each individual case taking into account its unique facts and circumstances.

Sanctions can often times be practically frustrating, particularly when dealing with contract wording and how best to protect your institution from unnecessary exposure. Recently, the English Court have passed down several judgments examining the typical language used in sanctions clauses and dealing with the implications that U.S. sanctions may have for payment obligations under contracts.

These cases illustrate the importance of drafting comprehensively and carefully when preparing sanctions clauses – and how beneficial it is to include bespoke sanctions provisions so that a party does not have to rely on doctrines such as illegality or frustration, or shoehorn a sanctions situation into a clause designed to deal with mandatory laws generally or force majeure. All aspects of sanctions laws and enforcement realities should be taken into account when drafting – including the fact that the sanctions environment may evolve during the term of the contract.

On June 30, 2020, the English Court of Appeal ruled that U.S. secondary sanctions constitute “mandatory provisions of law” in the context of a default clause within a Tier 2 capital lending facility agreement governed by English law. The decision provides much needed English judicial discussion about sanctions compliance.

Due to the risk of U.S. secondary sanctions, Cynergy withheld the payment of interest to Lamesa under the facility agreement on grounds that making payment would expose Cynergy to sanctions risk. Lamesa sued for breach of contract.

Defending the claim, Cynergy relied on Clause 9.1 (Non-payment) of the facility agreement, which stated that it would not be in default where non-payment of sums due was: “…in order to comply with any mandatory provision of law…”

Cynergy argued that section 5(b) of the US Ukraine Freedom Support Act 2014 (as amended) (UFSA) constitutes a mandatory provision of law within the meaning of Clause 9.1. The section authorises the President of the United States to impose sanctions extraterritorially (also known as “secondary sanctions”) on a foreign financial institution if it knowingly facilitates a significant financial transaction on behalf of a person who has been blocked under the US Ukraine sanctions regime including under E.O. 13662.

Lamesa argued that section 5(b) of UFSA does not qualify as a mandatory provision of law as it does not expressly prohibit payments, it merely creates a risk of penalty. Lamesa said that Clause 9.1 does not excuse Cynergy’s non-payment where it is to avoid the risk of sanctions rather than to comply with an express prohibition. The risk of being exposed to sanctions is not a provision of law, Lamesa said.

Lamesa also argued that the English court should not construe “mandatory provisions of law” as covering U.S. secondary sanctions as this would be contrary to the U.K.’s policy of not giving extraterritorial effect to U.S. sanctions.

The Court of Appeal rejected Lamesa’s arguments on the basis that the threat of sanctions in UFSA is an effective prohibition even though it does not contain the word “prohibit” or any equivalent word. As to Lamesa’s argument about the U.K.’s policy of not giving extraterritorial effect to sanctions, the first instance judge did not believe that policy was relevant to his interpretation of the facility agreement. The Court of Appeal took a different approach and referred to the E.U. blocking statute (Council Regulation (EC) 2271/96) for interpretative guidance.  The Blocking Regulation treats U.S. secondary sanctions as imposing a requirement or prohibition with which E.U. persons must comply.

The issue of possibility versus certainty of sanctions was also discussed in the 2018 case Mamancochet Mining Limited v Aegis Managing Agency Limited and Others [2018] EWHC 2643 (Comm) albeit in a slightly different context. In Mamancochet, the issue was whether or not the payment of a marine cargo insurance claim by defendant insurers Aegis was prohibited by U.S. laws and, even if it is not, whether Aegis were nonetheless excused from performance on the basis that there was still a risk that OFAC would view them as being in breach. The contractual clause on which Aegis sought to rely said that an insurer would be excused from paying a claim where doing so would “expose [it] to any sanction, prohibition or restriction…”. The judge said that this language would only assist Aegis if the subject payment would fall foul of sanctions laws. The clause expressly addressed exposure to sanctions and this is not the same as exposure to risk of sanctions, the judge said. He further stated that if Aegis wanted the protection under the clause to extend to the mere risk of sanctions, the clause should have stated that non-payment shall be excused where the payment would result in “exposure to the risk of being sanctioned” or would be “conduct which the relevant authority might consider to be prohibited”.

When comparing the reasoning of the various judges in Lamesa and Mamancochet it is difficult to reconcile their respective views on whether exposure to the risk of sanctions should be conflated with “exposure to sanctions”. The safest approach is to negotiate and draft comprehensive language dealing with all eventualities.

In this case, defendant Petroleos de Venezuela S.A. (PDVSA) was the borrower and Banco San Juan Internacional Inc (BSJI) was the lender under two credit agreements entered into in 2016 and 2017 respectively. These agreements occurred prior to the expansion of U.S. sanctions against Venezuela to target the country’s oil sector as later happened when President Trump was in office.

“Sanctions.  [PDVSA] will not repay Loans with the proceeds of

PDVSA argued that as it is a blocked person under U.S. sanctions, all of its business activities are “subject to sanctions” and Section 7.03 has a suspensory effect entitling it to withhold the making of payments whilst the relevant sanctions remain in effect. It further argued that this is the normal course when sanctions affect payment obligations and that Lamesa and Mamancochet are authority for this.

The Court rejected PDVSA’s case and held that it is liable to make payment to BSJI notwithstanding the U.S. sanctions. The Court decided that PDVSA’s characterisation of Section 7.03 was incorrect. Section 7.03 was a negative covenant, not a provision entitling PDVSA to suspend payment. The negative covenant is for BSJI’s benefit only and BSJI can choose to waive (which it did). The judge did not consider that any of the words of Section 7.03 could be read as providing for the suspension of payments.

PDVSA also advanced an illegality defence, which failed as well. The court did not consider that the common law supported PDVSA on this point, but aside from that the credit agreements contained a provision, Section 6.05 in each of them, formulated as an affirmative covenant imposing an obligation on PDVSA to do something, requiring PDVSA to apply to a “Governmental Authority” (the contractual definition of which in this case covered OFAC) for a specific licence where necessary to make payment under the credit agreements. In light of this, amongst other reasons, PDVSA’s illegality case was not made out.

*Miranda Hearn is a Senior Associate (solicitor) in Hill Dickinson LLP’s London office specialising in natural resources, commodity trading and shipping law. She advises on all aspects of sanctions compliance with particular expertise in the oil and gas context. Her sanctions advisory practice covers the interpretation of sanctions laws and analysis of transactions from a sanctions risk perspective. The rest of her practice deals with advising on all aspects of commodity trading and shipping transactions, drafting contractual documentation, and litigation and arbitration. She spent a year seconded to an oil and gas trading house as a sanctions advisor, and previously spent six months seconded as trading floor counsel at the same trader.