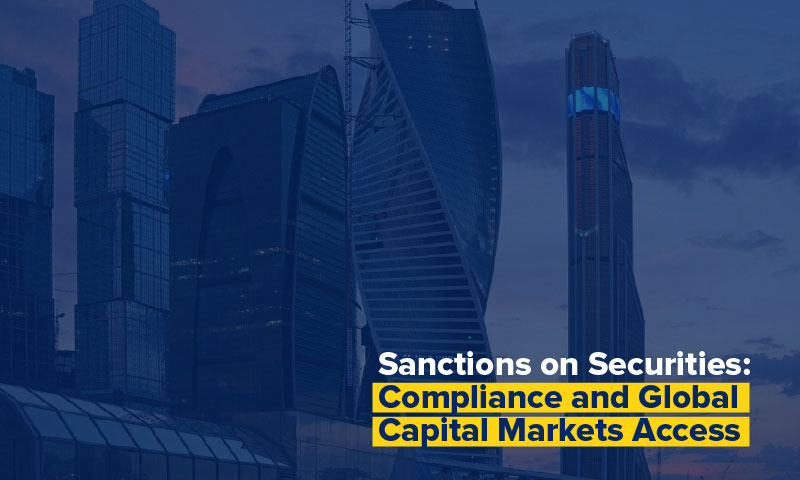 The following table explains some of the common securities transactions challenges for global financial institutions and players affected by these sanctions.

Below we provide a few examples of securities-related sanctions. Then we cover compliance challenges.

An example of sectoral sanctions on securities investments in certain sectors, governments or companies is the August 2017, Executive Order (E.O.) 13808 issued by the Trump Administration.

The prohibitions target transactions relating to new debt, equity, issuance of bonds, dividend payments or other distributions, and the purchase of securities from the Government of Venezuela and PDVSA.

Similarly, OFAC has imposed similar sanctions against Russia that prohibit U.S. persons from dealing in new debt over a certain maturity and new equity of certain major Russian financial institutions, energy companies, and companies in the defense sector that have been designated within the Sectoral Sanctions Identification (SSI) Lists.

The reasoning of the CMCC measures is to prevent, “U.S. investment from supporting the Chinese defense sector, while also expanding the U.S. Government’s ability to address the threat of Chinese surveillance technology firms that contribute—both inside and outside China—to the surveillance of religious or ethnic minorities or otherwise facilitate repression and serious human rights abuses.”

The sanctions prohibit purchases by U.S. persons of certain securities issued by these CCMCs.

The restrictions apply to financial instruments such as derivatives (including options), ETFs, index funds, mutual funds, and currency, as well as certain notes, drafts, bills of exchange, or banker’s acceptances.

The sanctions apply only to securities from companies that are specifically named in the Annex of the E.O.

In June 2021, President Biden issued a modification of the E.O., that rescinds and supersedes the previous CCMC sanctions regime.

An example of EU sanctions that affect securities is EU Council Decision 2014/659/CFSP of September 8, 2014.

The sanctions include the prohibition of the direct or indirect purchase or sale of the brokering or assistance in the issuance of, or any other dealing with bonds, equity or similar financial instruments with a maturity exceeding 90 days, issued after 1 August 2014 by:

In this context, there is a prohibition of transactions in or the provision of financing or investment services or dealing in new bonds or equity or similar financial instruments with a maturity exceeding 90 days issued by state owned Russian financial institutions, excluding Russia based institutions with international status established by intergovernmental agreements with Russia as one of the shareholders.

These prohibitions do not affect the granting of loans to or by those state owned Russian financial institutions independently of their maturity.

The sanctions risk affecting the securities sector varies depending on the clients and product or service offered.

Some risk factors include:

For example, an investment adviser that manages a private equity fund that has a number of U.S. and non-U.S. investors, including an offshore trust that lacks transparency, should exercise greater scrutiny.

Similarly, an investment adviser that manages a U.S. hedge fund with an offshore related fund where the beneficial owners are offshore investors should be attuned to heightened sanctions risks.

OFAC expects investment advisers, both registered and unregistered, and other securities firms, to develop risk-based compliance programs to detect, monitor, and address potential OFAC violations that may arise before they conduct business on behalf of a customer, or prior to the execution of a transaction.

A strong compliance process should have a securities screening solution that identifies securities related to sanctioned entities and monitors for other sanctions-related risk.

In order to overcome these challenges, core controls should include:

For instance, an OFAC sanctioned company might have other subsidiary companies that also trade securities, these can be detected with specialized software that enhances the scope of the sanctions research.

For example, identifying whether third-party assets will be held in a customer’s account and, if so, understanding the OFAC-sanctions risk of the third party and its assets.

For example, restricting higher-risk customers from using omnibus accounts. These accounts allow for managed trades of more than one person, and allow for anonymity of the persons in the account.

Due to their anonymity sanctioned OFAC individuals could try to use them to circumvent OFAC sanctions.

OFAC encourages the securities industry to develop proactive, risk-based compliance programs to ensure that it does not conduct transactions for the benefit of designated terrorists or other sanctions targets.

In 2008 OFAC issued a guidance document on risk factors for compliance in the securities industry. Another useful guidance is the 2012 OFAC Regulations for the Financial Community.

Further, OFAC  has a Financial Sector section on the OFAC Information for Industry Groups with updated information and a Frequently Asked Questions section, to help understand and comply with the U.S. sanctions programs relating to securities.