The Complexities of Dealing with Iranian Business Counterparts – Tips and Practicalities

Since the implementation of the Joint Comprehensive Plan of Action, or JCPOA, in early 2016, the international community’s plan to slowly ease sanctions against Iran has led to banks and financial institutions becoming increasingly unsure about which transactions are allowed and which are still too risky to undertake. As such, compliance officers and other professionals have had to navigate extremely treacherous waters.

In a recent webinar at SanctionsAlert.com, Gert Demmink, Partner at compliance consultancy firm Philip Sidney,and Kees Lakerveld, Managing Director at risk management firm 2FX Treasury,discussed the complexities that can arise when dealing with an Iranian counterpart and provided practical tips as to what a company can do in order to stay fully compliant. Both speakers are based in the Netherlands.

Mr. Lakerveld launched his talk by outlining a few recent cases of financial institutions that have received substantial penalties for breaching sanctions against Iran. This includes big name banks such as BNP Paribas, ING, and ABN AMRO, the former of which was slapped with an $8.9 billion fine for violations of the Iranian, Sudanese, and Cuban sanctions regimes.

“This is why banks are so hesitant to deal with Iranian transactions”, says Mr. Lakerveld. “By and large, there are two options: [Banks] are either fully risk averse and do not want to get close to any deal with an Iranian nexus or they are willing to work on a very limited scale with a very limited number of clients”, he adds.

In fact, most Western and European banks do not have a correspondent banking relationship with Iran because they are so concerned about the risk. On the other hand, Iranian banks are willing and making an effort to comply with the international system, but still lack the basic capabilities and compliance standards to carry out cross-border payments.

According to Mr. Lakerveld, in order to regain access to the capital and financial markets, Iranian banks will have to increase their capital (risk-weighted assets), implement sound management of risks, and bring their compliance standards in line with international standards.

How to Best Transact with Iran

Despite the many risks associated with transacting business through Iranian counterparts, Mr. Lakerveld says it is nevertheless possible to do so. To this end, he provides a few practical tips:

How to Conduct a Transaction with an Iranian Counterpart:Leverage and Network

*Make use of a European regulated, reputable intermediate bank (rather than a correspondent bank).

*Use theEuro, as 1. It provides a euro-clearing network of banks in 28 countries and, 2. the Dollar is not allowed

*Consider Government Backed Financing, which is available if specific requirements are met

*Always validate sanctions compliance and counterparty due diligence and make sure that complete documentation is provided.

*Avoid ‘stripping’ transactions to hide Iranian nexus, as this can have severe consequences

The Case of Reza Zarrab

Staying compliant with Iranian sanctions is a very real ongoing concern for individuals and businesses alike.

Most recently, in 2016, Mr Reza Zarrab, a Turkish- Iranian gold trader, was arrested in Miami, Florida. Along with nine other defendants, including Turkish bank CEO Mehmet Hakkan Atilla, Zarrab was charged with money laundering, serious bank fraud, and conspiracy to evade U.S. sanctions law against Iran.

This alleged conspiracy to avoid U.S. sanctions against Iran was carried out by disguising oil revenue transactions through the use of false documentation and the export of Turkish gold. Iranian oil companies would deposit oil revenues into a Turkish bank account, which were then used to buy gold in Turkey. That Turkish gold was sent to the UAE, converted to cash, and then sent back to Iran through a U.S. correspondent bank. 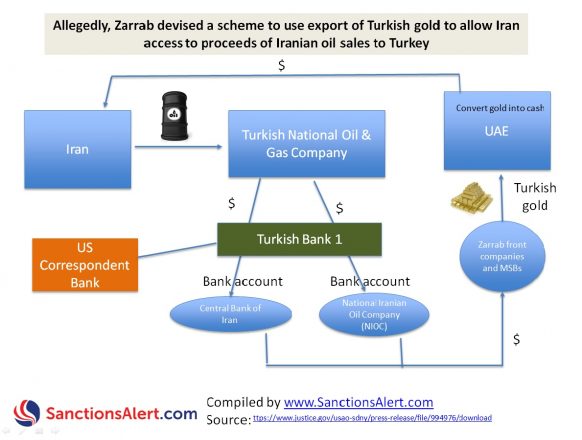 Atilla was convicted of conspiracy on January 3, 2018, though found not guilty of money laundering. On the same day, it was discovered that his codefendant, Reza Zarrab, signed a secret plea deal with government attorneys last October in exchange for the possibility of leniency and federal witness protection.

Mr Lakerveld emphasized that the defendants involved in the case were already very wealthy and well-connected within Iran and Turkey. As such, it was not a great difficulty for them to get in contact with certain officials and high-ups in government to carry out their conspiracy.

The Big Picture – Business as Usual?

Though Iran remains a high-risk country, there are perfectly legitimate ways to transact business with Iranian counterparts and ensure that your firm continues to comply with sanctions regulations. Mr. Demmink summarizes a few keys points to watch in order to stay compliant:

“There is only so much you can do. Courts in both the U.S. and Europe have both ruled that you must take ‘reasonable measures’ or pass the ‘reasonable man’ test, says Mr. Demmink. “In other words, compliance professionals must make sure that, from a compliance point of view, they adhere to highest standards as a professional institution operating in a professional environment” he explains.

The next www.SanctionsAlert.com webinar, “LessonsLearnt from the ZTE Case” will take place on January 25, 2018