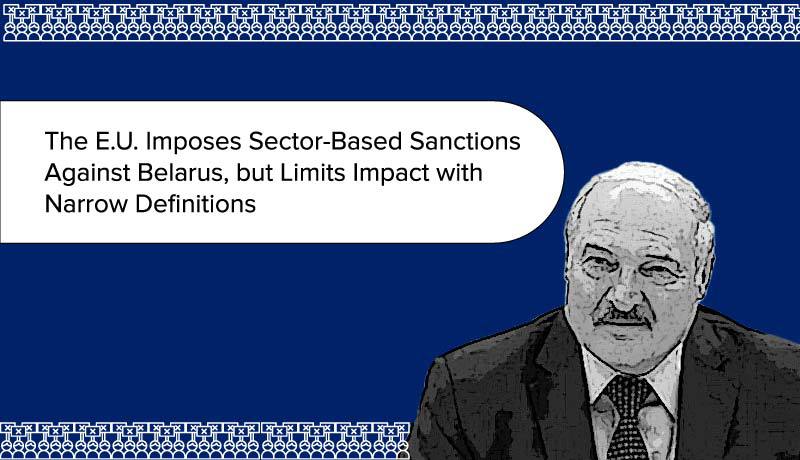 The E.U. Imposes Sector-Based Sanctions Against Belarus, but Limits Impact with Narrow Definitions

While not a surprise, this latest round of sanctions on June 21 against the Belarusian regime marks a significant increase in severity and poses serious implications for E.U. operators conducting business with Belarusian firms.

ACSS looks at what led to the imposition of this latest wave of sanctions and the regulations they stipulate. Further, we discuss the potential consequences of the sanctions, which include sector-based sanctions.

This isn’t the first time that the E.U. has imposed sanctions against Belarus. Following the disputed presidential election in August 2020, the E.U. imposed several rounds of sanctions:

By the start of 2021, a total of 88 individuals and seven entities were designated for their role in counterfeiting the August 2020 presidential elections, and the repression that followed. Those listed were made subject to travel bans and asset freezes.

On May 24, 2021, Belarusian authorities made international headlines for the forced landing of a Ryanair flight in Minsk to detain journalist Raman Pratasevich, who had been critical of Lukashenko’s government, and Pratasevich’s girlfriend, Sofia Sapega.

The flight had originated from Athens and was bound for Vilnius. At the time of writing, both Pratasevich and Sapega have since been moved to house arrest.

Latest Round of Sanctions

Following the forced landing and detention, E.U. leaders invited the Council to rule on relevant sanctions.

In the first week of June, the E.U. banned Belarusian air carriers to strengthen existing restrictive measures targeting the regime.

The ban stipulates that E.U. members must deny Belarusian carriers from using their airports and flying in their airspace. E.U. candidate countries and members of the European Economic Area (EEA) aligned their policymaking with the E.U.’s decision soon afterward.

On June 24, the E.U. announced a fourth package of sanctions targeting an additional 71 individuals and seven entities for their violent repression of Belarusian civil society.

Seven individuals and one entity were also designated for their role in the forced landing of the Ryanair flight. At the time of writing, E.U. sanctions against Belarus target a total of 166 persons and 15 entities.

The latest round of E.U. sanctions against Belarus includes sector-based sanctions and are inherently more severe than those previously implemented.

In addition to imposing asset freezes and travel bans against individuals and entities, the sanctions take aim at Belarus’ access to financing, investment services, and ban the country’s main exports, including petroleum, potassium-chloride (potash) and tobacco.

The regulation also bans dual-use items and “equipment, technology or software intended primarily for use in the monitoring or interception by, or on behalf of, the Belarusian authorities of the internet and of telephone communications on mobile or fixed networks.”

Trading (sell, supply, transfer, or export) any type of goods listed above is banned. E.U. nationals and entities are forbidden from making funds or economic resources available to those listed.

E.U. financial institutions cannot provide insurance, re-insurance, new loans or other forms of credit to the Belarusian government or its agencies.

The Council Regulation can be found here in full.

Exceptions to the Regulation Limit Impact

The underlying goal of E.U. sanctions against Belarus is to pressure the Belarusian regime to initiate a “genuine and inclusive national dialogue with broader society and to avoid further repression.”

But some of the restrictions are limited in scope, such as:

The sanctions could cause funding shortfalls for small and mid-cap companies in Belarus, as multilateral development banks will be required to take action to limit their involvement in Belarus.

These specialized banks provide medium and long-term finance to the industrial, education, energy, agricultural and other sectors. They provide finance to both the private and public sectors.

The European Investment Bank (EIB), the lending arm of the E.U., says on its website that it has committed €200 million to support small and medium-sized enterprises (SMEs) and mid-caps through local banks in Belarus.  But it has stopped any disbursement or payment under any existing agreements in relation to projects in the Belarus public sector, and any existing technical assistance service contracts.

“The EIB has been closely following the events in Belarus since the presidential elections in August. Following the non-recognition of the results of the election by the European Union, the EIB put all new operations in the country on hold and has delayed disbursements to the public sector pending further developments. In particular, the EIB is awaiting the outcome of the ongoing review of the EU’s relationship with Belarus undertaken by the European Commission and the European External Action Service, to which it has contributed.”

Another round of E.U. sanctions is not unlikely. On June 21, the Council declared: “We also stand ready to adopt further measures, including on other economic actors, if the situation in Belarus does not improve.”

With Canada, the U.K., and the U.S. now coordinating their sanctions programs with the E.U. against Belarus, pressure is mounting for Lukashenko and party officials to release political prisoners and allow civil society to assemble freely.