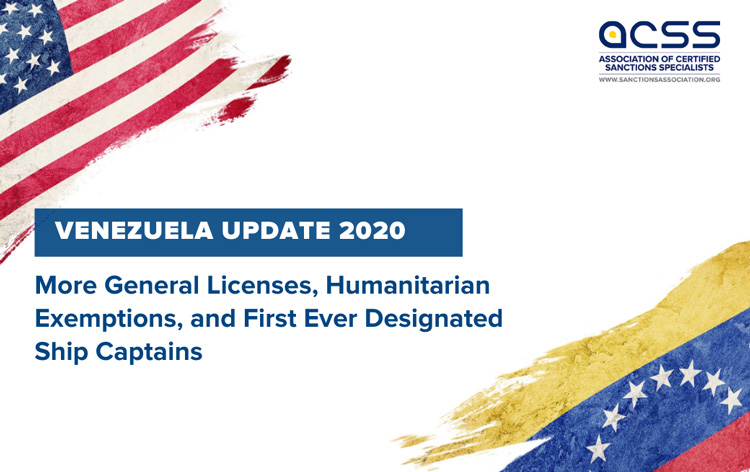 For the first half of 2020, OFAC has continued to focus on the Government of Venezuela, the shipping industry, and its ongoing trading of oil with Iran, in violation of OFAC regulations.

This follows an ever-worsening situation in Venezuela, which has suffered severe cash shortages and human rights abuses since its leader, Nicholas Maduro, assumed power in 2013. Since that time, the struggling country’s infrastructure has broken down, output has crashed, and (most recently, due to the pandemic) global oil prices have collapsed, further squeezing oil revenues. Maduro has now turned to his so-called “allies” in Tehran, but has run into some problems since Iran has insisted on hard payments.

Beginning back on April 3, 2020, OFAC issued seven General Licenses all relating to Humanitarian assistance, from the authorization of the following: GL #4-C, continuing with 16C, 20B, 26, 29, 30, and GL #33. Among other things, OFAC authorized trade with Venezuela for a variety of goods, permitting transactions involving specific Venezuelan banks, NGO’s, and other International Organizations.

In addition OFAC announced exemptions to ensure that humanitarian goods and services reached the people of Venezuela. The U.S. maintains broad exemptions allowing the provision of humanitarian assistance and the commercial sale and export of agricultural commodities, food, medicine, and medical devices.

These follow Executive Orders and guidance published by OFAC in August of 2019.

Since Venezuela has a total of 35 OFAC General Licenses as of November 5, 2019, compliance officers must scrutinize each transaction with regards to what is and what isn’t permissible. The total number of Venezuela General Licenses outstrip Iran’s 8 four-fold, and Iran is the most heavily sanctioned country, and #1 terrorist state in the world. So to keep your financial institution out of regulatory trouble, compliance officers must make sure to keep a close watch on the Venezuela sanctions programs OFAC updates.

Compliance During COVID:  Will OFAC Crack Down Harder or Ease Up?

On April 9, 2020, OFAC announced that they stand with all governments and their citizens around the world in providing humanitarian assistance to areas affected by COVID-19, including Venezuela and other countries such as Iran, Syria, and North Korea. OFAC, as it has done so previously, supports the governments, international organizations, non-profit organizations, and individuals delivering medical supplies. The U.S. Government’s most important aim while providing this assistance is to mitigate the potential for this humanitarian aid to be diverted or misused by terrorists and other illicit actors.

Other than providing certain exemptions with regard to humanitarian assistance, OFAC has not eased its sanctions or its requirements for financial institutions to comply.

As they recognize the operational challenges that face many institutions during the pandemic, OFAC is encouraging banks to contact them immediately if they experience difficulties meeting any of the deadlines for filing the required reports such as blocks, rejects, and Voluntary Self Disclosures.

The First Ever Designated Ship Captains

On June 18, 2020, OFAC sanctioned the captains of five tankers that recently delivered Iranian gasoline to Venezuela. It is important to note that this is the first instance in OFAC’s history of designating SDN’s that a ship captain was designated.

“The captains, who worked for either Islamic Republic of Iran Shipping Lines (IRISL) or National Iranian Tanker Company (NITC), led the Iranian-flagged tankers on a voyage to Venezuela with more than 1.5 million barrels of gasoline and gas components,”, the Treasury said. IRISL has been a thorn in the side for all financial institutions, for many years, with their constant changing of vessel IMO number’s, names, and their vessel movements by shutting off their transponders, to make it difficult to track them and their illicit activity.

The tankers have all been identified as blocked property of IRISL and NITC, which were re-designated in November 2018 following the U.S. exit from the nuclear deal with Iran.

The deliveries to Venezuela came despite rationing and an oil price hike in Iran imposed by the government in November 2019, which led to protests and a crackdown.

It is important to note here that Iran is not the only sanctioned country that continues to assist Venezuela’s nefarious OFAC sanctions evasion activities.

In late November 2019, the Trump Administration blacklisted a Cuban company it accused of helping a Cuban state-run oil firm evade Venezuela-related sanctions. This was the latest in a series of actions targeting Havana for its support of Venezuelan President Nicolas Maduro.

Sanctions were imposed on Corporacion Panamericana SA for acting on behalf of oil import and export company Cubametales, which was blacklisted in July as part of Washington’s Venezuela pressure campaign, according to a statement from the U.S. Treasury Department.

In addition to assisting Venezuela evade OFAC sanctions, Cuba has been assisting in propping up the Maduro regime by being complicit in undermining Venezuela’s democracy and triggering the hemisphere’s largest humanitarian crisis which forced 15 percent of the population to flee the country. This precipitated a food shortage and health crisis of unprecedented proportions in the region.

In early April 2019, it was reported that Cuban military interventionism has recently been joined by a Russian military presence with the announcement that Moscow will establish a military base in Venezuela, the shipment of weapons, the visit of nuclear bombers and the deployment of some troops and high-ranking officers.

This adds to a sanctions compliance officers headaches since all transactions involving Venezuela, Russia, and Cuba demand enhanced due diligence in both the KYC stage and live transaction stage.

If the past few months, transacting oil in violation of OFAC sanctions was not enough.  Venezuelan dictator, Maduro, started to send a great chunk of the nation’s gold to Iran in exchange for help in propping up their flailing oil industry.

It was reported that at least nine tons of gold worth about $500 million was sent to Iran, which left the crisis-plagued nation with a tiny $6.2 billion in hard-currency assets, the lowest amount in three decades.

As a compliance officer, the smartest way to detect any illicit behavior emanating to/from Venezuela is to review your customer base, and make a risk based decision on possibly closing out your Venezuela based accounts. You can also heavily scrutinize your Banks internal OFAC transaction detection system, and add alerts to both your AML and OFAC monitoring systems, to detect movements between Iran and Venezuela, Cuba to Venezuela, and pay special heed to Venezuelan shipping movements.

On August 14, 2020, the U.S. seized Iranian petroleum bound for Venezuela aboard four tankers near the Strait of Hormuz. This involved a forfeiture order, which was enforced and aimed at both Iran’s Islamic Revolutionary Guard Corps and the Caracas government, the Justice Department announced at the time.

The four vessels contained roughly 1.116 million barrels of fuel, which was confiscated from the foreign-flagged vessels M/T Bella, M/T Bering, M/T Pandi and M/T Luna, according to a Justice Department statement. They added that the seizure took place “with the assistance of foreign partners.”

According to The Associated Press, quoting unnamed U.S. officials, “no military force was used in the seizure of the cargo, and none of the ships was physically impounded. Instead, U.S. officials threatened ship owners, insurers and captains with sanctions to force them to hand over their cargo,” the AP reported.

*Robert L. Williams III, CAMS, is a financial crimes prevention professional with nearly 20 years of expertise in the sectors of banking, including the U.S. Patriot Act, BSA, AML, KYC, and OFAC, at three different foreign banks. He began his career at Credit Lyonnais/CALYON, and then eventually joined Credit Agricole in 2002. He then moved on to BNP Paribas where he was the OFAC Compliance Officer. Finally, he was employed at Standard Chartered Bank in a Sanctions Advisory role working with the Account Opening/KYC teams and Relationship Managers to mitigate internal and external sanctions concerns.