Who Gets Caught Violating U.S. Economic Sanctions? Trends in OFAC Enforcement Actions from 2003 – 2015

The United States employs economic sanctions more than any other country in the world. For companies, keeping up with all the sanctions obligations imposed by the U.S. Government can be a significant challenge and burden. It can also be a costly burden if ignored. In 2014 and 2015, the U.S. Department of Treasury’s Office of Foreign Assets Control (OFAC) collected approximately $1.2 billion and $600 million from companies in sanctions-related penalties.To date, there have not been any systematic efforts to analyze which parties OFAC takes enforcement actions against for violating U.S. sanctions.  This report explores trends in sanctions enforcement actions undertaken OFAC from 2003-2015.  The trends reveal significant variation in the number of enforcement actions undertaken during the Bush and Obama Administrations, but also interesting differences in which sectors’ companies are most frequently penalized, where they are located, and what sanctions programs they allegedly violated. 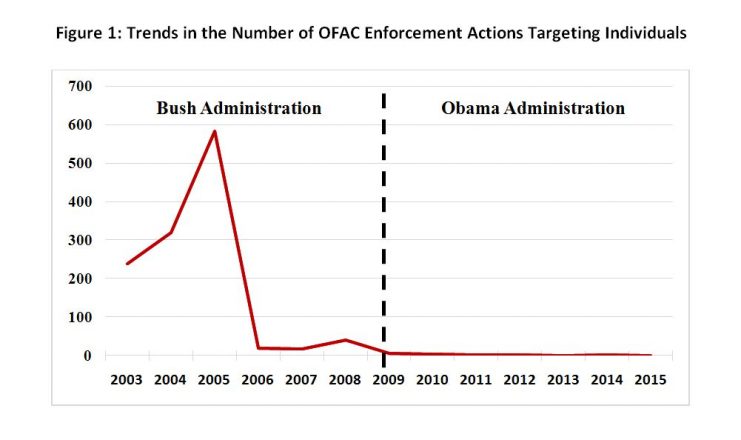 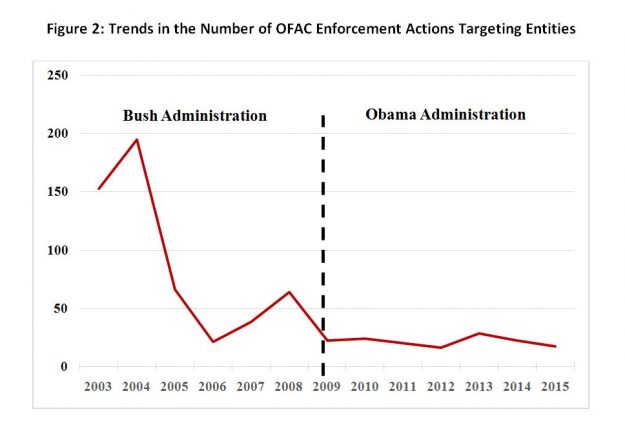 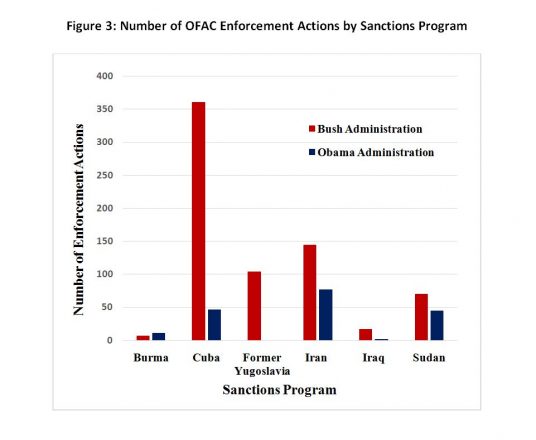 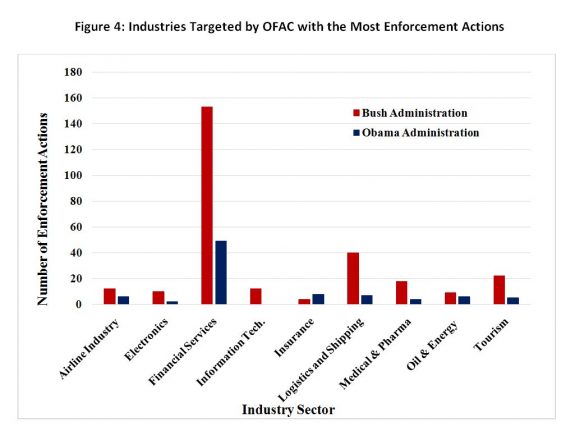 Finally, the data on OFAC’s enforcement cases provides insights into where alleged sanctions violators were from.  In total, there were 636 enforcement actions that involved U.S. companies and 52 that involved foreign companies.  This makes sense, as the application of U.S. sanctions to foreign entities is much more controversial.  Enforcement actions against foreign firms are also much harder to investigate and can provoke the ire of foreign governments.  OFAC has primarily focused its attention on going after foreign financial institutions that violated U.S. sanctions, as the U.S. Government can leverage its central role in the global financial system to force foreign banks into complying with its sanctions policies.The Obama Administration accounted for 61% of the enforcement actions against foreign firms.

Table 1 lists the U.S. states that experienced the leading number of companies subject to OFAC enforcement actions.  As the table reveals, New York and California surpassed all other states in the number of enforcement actions that were brought against their companies.  Financial companies in New York City, which is home to Wall Street and is a global financial hub, were responsible for a substantial portion of the enforcement actions that OFAC undertook.Notably, the New York County District Attorney’s Office assisted in a number of enforcement proceedings against alleged sanctions violations that took place in New York.  California, which possesses an economy as large as many independent governments, is second on the list.  No other states had nearly as many sanctions-related infractions as these states.

These trends illustrate that there is a great deal of inconsistency in how U.S. economic sanctions have been enforced.Just within the past 13 years, the number of average enforcement actions brought by OFAC has declined dramatically and the body has nearly ceased targeting individuals.  Additionally, the steepest decline in enforcement actions of still active sanctions occurred with respect to Cuba.  This suggests that political saliency with which U.S. Presidents view particular sanctions regimes influences which sanctions programs get more or less attention from OFAC. One consistent trend, though, has been that OFAC has focused launched the largest number of its enforcement actions against the financial services industry.  Banks are clearly within OFAC’s cross-hairs for violating U.S. sanctions.  This also helps explain why companies in New York faced sanctions enforcement actions more than any other state.

Yet even though the data show that OFAC is pursuing far fewer cases in recent years, the total amount of money OFAC has collected from sanctions-related penalties is as high as it has ever been.  This suggests that it is also important to understand how OFAC’s behavior has changed with respect to the penalties it imposes. The next report in this series will explore how and why OFAC’s approach towards penalizing companies has changed substantially over the past 13 years.

*Bryan R. Early is an Associate Professor of Political Science and the Director of the Center for Policy Research at the University at Albany, State University of New York. He is the author of Busted Sanctions: Explaining Why Economic Sanctions Fail (Stanford University Press, 2015).