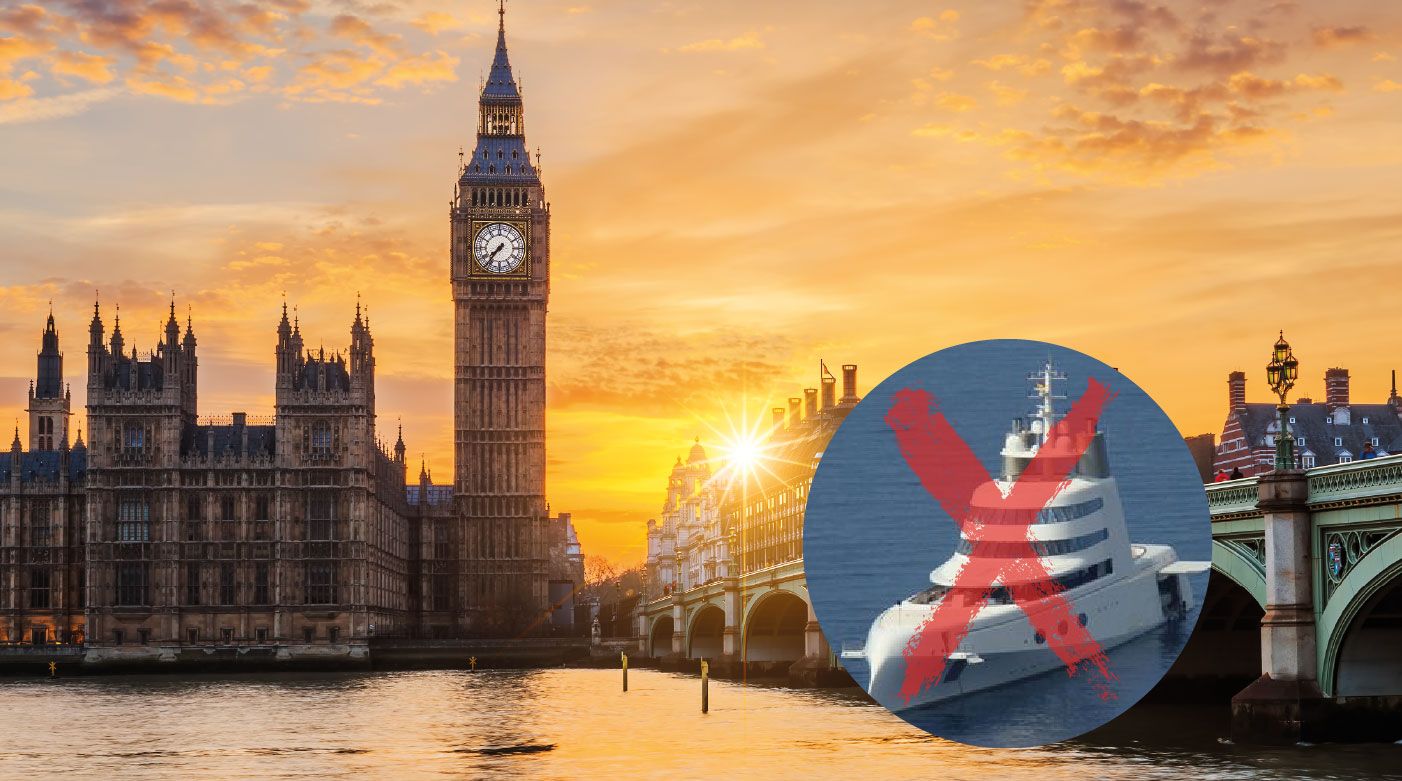 On the waters of the Thames snaking through London, the UK launched its latest offensive in its sanctions program against Russia. The target was the 50.5-meter superyacht Phi, fitted with a swimming pool, penthouse, and “infinite wine cellar” docked in Canary Wharf in east London. The vessel was in London for a yacht awards ceremony and was due to leave on March 29, the day of its seizure by government agencies working in concert.

Photos published in British newspapers showed National Crime Agency officers onboard their colorful, picturesque haul. While they tended to the details, you could easily imagine Daniel Craig as James Bond on deck, being thanked for a job well done by actress Dame Judy Dench heading the agency, and by Foreign Secretary Liz Truss playing herself.

Indeed, the yacht seizure in Canary Wharf resembled a Pinewood Studios film set, but in reality, this was the theater of sanctions. Transport Secretary Grant Shapps said the yacht’s owner was not sanctioned but had “close connections” to Russian President Vladimir Putin, calling the seizure “a clear and stark warning to Putin and his cronies.” The Department for Transport, he said, is looking at other vessels and its actions should send “an example to international partners.”

The Russia-Ukraine war has taken the UK’s sanctions program with zeal and purpose into a second phase. The UK adopted the EU’s sanctions initiative, enacting it and specifically those against Russia in Russia (Sanctions) (EU Exit) Regulations 2019.

The sanctions were devised to encourage Russia to cease actions to destabilize Ukraine or undermine or threaten the territorial integrity, sovereignty, or independence of Ukraine. The regulations have undergone a series of changes since coming into force on December 31, 2020.

On March 24, 65 Russian sanctions that “cut off vital industries fuelling Putin’s war machine” were announced by the Foreign, Commonwealth & Development Office (FCDO). These target strategic industries, banks and business elites include the paramilitary/mercenary Wagner Group, defense company/drone producer Kronshtadt, Alfa Bank, diamond producer Alrosa, Sberbank CEO Herman Greg and Galina Danilchenko. Russia appointed Danilchenko as the mayor of Melitopol, which the FCDO points out is “the first time an individual has been sanctioned for collaboration with Russian forces currently in Ukraine.”

The global asset value of the Russian banks sanctioned by the UK totals £500 billion since the invasion; the net worth of the oligarchs and family members is more than £150 billion. The UK has sanctioned more than 1,000 Russian individuals and entities.

Foreign Secretary Liz Truss said: “The provisions brought in by the Economic Crime Act have streamlined the previous legislation so the UK can respond even more swiftly and effectively to the current crisis. The government will continue to tighten the screw and use sanctions to degrade the Russian economy on a scale that the Kremlin, or any major economy, has never seen before.”

Testament to the interest in the UK sanctions program against Russia was a UK government webinar on March 17. Around 6,000 signed up to listen to a cross-government briefing hosted by the FCDO and involving the Office of Financial Sanctions Implementation (OFSI), Department for Transport and Department of Trade. Many attendees were new to sanctions. They watched the government departments make their presentation in a webinar lasting nearly two hours, beginning with its program from when it left the EU, and ending with more than 30 minutes of questions.

Daniel Drake, head of the sanctions task force at FCDO, said the government agencies were “prepared to impose a swingeing set of sanctions to exact the highest price.” He said they would make full use of new powers through the UK’s Economic Crime (Transparency and Enforcement) Act 2022, which came into effect in March to sanction the Russian elite around Putin and those “most complicit” in the invasion.

The new act enables swift designations with fewer requirements and allows groups to be designated by description, such as a political body. “It enables the UK to align more rapidly with designations imposed by our allies,” Mr Drake said.

The 2019 regulations, which have been amended eight times, include the following prohibitions:

On February 10, six amendments were made to Russia (Sanctions) (EU Exit) (Amendment) Regulations 2022, including the changing of designation criteria; new financial, trade and transport sanctions; financial prohibitions relating to the central bank; and trade and aviation prohibitions.

The aim is to degrade the military-industrial complex and strategic economy, including aviation, space and marine sectors by denying access to goods difficult to substitute from elsewhere.

Changes to the regulations, including all designated persons, entities and ships, other documents and contact details, are available in the Gov.UK collection UK sanctions relating to Russia.

UK will Ratchet Up the Pressure

Mr Drake said the UK will “continue to ratchet up the pressure on Putin and the regime around him for as long as it is needed.” He said his department, formerly the Sanctions Unit and now the Sanctions Task Force, has increased three times since the invasion. He said the Treasury, Home Office and other government departments have also scaled up.

OFSI Director Giles Thomson said on his LinkedIn page on March 29 that his office is looking for 20 sanctions advisers and 10 senior sanctions advisers “in response to the significant expansion of the sanction regime following the Russian invasion of Ukraine.”

In the webinar, OFSI made attendees aware of its role, discussing general and specific licenses, and the penalties for breaching sanctions. OFSI can issue general licenses that allow parties to undertake specified activities, but it does not accept applications.

Examples of general licenses include “Wind down of positions Sberbank,” “Correspondent banking relationships & processing sterling payments,” and one granted for the operations of Chelsea Football Club after its owner Roman Abramovich had been sanctioned.

When a specific license is required, attendees were advised to apply at least four weeks in advance and to provide detailed information. Examples of specific licenses involve those covering the basic needs of a designated person, legal fees, maintenance of frozen funds or economic resources and prior obligations such as a contract that started before an entity or individual was designated.

Penalties for breaching sanctions range from £1 million or 50% of the total value of the breach, or if referred to law enforcement, up to seven years’ imprisonment. OFSI guidelines, its email alert service and updates on UK sanctions are available on its blog.

Commenting on the role of the UK sanctions program, Mr Drake said: “Our target is the Russian economy and Putin, and the effects will be felt over the coming weeks and months.” He said the government is mindful of the effects such a widespread sanctions program can have on UK businesses.

Those feeling the pinch are guaranteed to be some distance from superyachts, caviar and vodka martinis – either shaken or stirred. While the Treasury Committee couldn’t quantify the cost to the public in a report published on March 23, it said, “combined with the already present pressures in the UK on the cost of living, it will impact the whole country, and will be felt particularly by low-income households.”