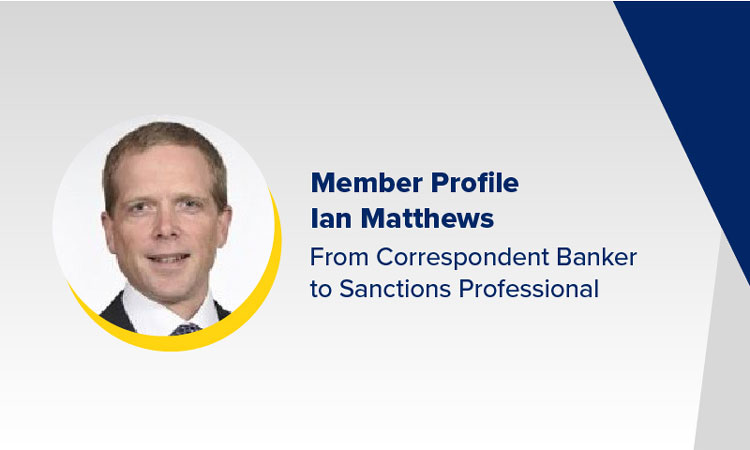 ACSS interviews Ian Matthews, winner of the May SanctionsConnect Sanctions News Quiz. Ian is based in London and is Director, Sanctions and Anti-Bribery & Corruption in the Corporate & Institutional Banking division of National Australia Bank Limited

ACSS: Can you tell us where you work and what you do?

Ian Matthews: I work for National Australia Bank in London. I am in the first line financial crime advisory team specializing in sanctions compliance and ABC in the Corporate & Institutional Banking division.

ACSS: Can you give us a sense of what a typical day looks like for you?

Ian Matthews: I am part of a wider, global team, so a lot of time is spent managing a diverse internal network on things such as governance, policy development and providing ad hoc guidance. About half my day is spent working with NAB’s front-line businesses on specific questions that arise from our customer operations – be they screening alerts, sanctions CDD/EDD, adverse news monitoring or new transactions.

ACSS: How did you get into the sanctions field?

Ian Matthews: Accidentally, rather than by planning. I was previously a correspondent banker for a UK bank and dealt with customers across Europe, Middle East, Africa and Asia at a time when my former employer was having its own discussions with OFAC. 6 years spent working in Dubai completed my immersive experience in the world of sanctions. I joined NAB as a correspondent banker but was invited to join the sanctions advisory team after 4 years when they wanted to enhance the team with some European- and business-centric skills. The last three years have had a steep learning curve!

ACSS: How long have you been a member of ACSS and what is the experience so far?

Ian Matthews: I joined ACSS when the London Chapter was set up last year. I enjoy the fact that its sole focus is on sanctions, as sanctions often appears only as an add-on to AML in many other professional groups. This means members have more in common, as well as have a greater diversity of backgrounds from across all sorts of industry sectors.

ACSS: What do you find challenging in your work as a sanctions officer?

Ian Matthews: I am a natural conciliator and always try to find the middle ground. There are times in our work when we need to stand firm and just say “no” – I find that difficult.  On the other hand, it means I really try and get to grips with all the arguments before saying no, and that means I can be more confident in my decision or advice. Hopefully this means I have a reputation as a facilitator and that – when I raise objections – they get listened to.

ACSS: What is your tip for other ACSS members who work in sanctions?

Ian Matthews: Do your homework, stay informed and stand your ground if you need to.

ACSS: Do  you have a mentor in the sanctions field? Who is it?

Ian Matthews: I have two, but I will not embarrass them by naming them – they don’t know they are my mentors! One is a colleague who has helped me convert from being a correspondent banker to a sanctions specialist by acting as a ‘second pair of eyes’ and picking up the tricky decisions in the early months. The other is a leading expert globally in sanctions compliance in a particular industry – he must dread me suggesting a coffee and a chat, as all I seem to do is draw down on his knowledge.

Ian Matthews: I have only recently joined the ACSS and am not yet certified. I have done a couple of other qualifications before joining ACSS and will certainly consider this qualification during my next round of development reviews.