Myanmar opened up, but record on human rights, corruption and money laundering is mixed

Despite the October lifting of US sanctions, tensions in Myanmar have intensified and corruption, human rights and money laundering remain a volatile issue. Extreme caution in business relations is still needed.

In an earlier SanctionsAlert.com article, we covered the lifting of US sanctions as well as the status of current EU and Canadian sanctions and restrictions against Myanmar. The complex interplay between the patchwork of US Department of Treasury’s regulations and currently applied exceptions was discussed in some detail,namely the continued allowance of US financial institutions to provide correspondent banking services to certain Myanmar banks, in some circumstances, before and after the lifting of the sanctions.

This article on the recent lifting of sanctions against Myanmar covers corruption,human rights and money laundering concerns as expressed by international groups, as well as the US State Department, and how those concerns can have a potential knock-on effect on financial institutions and others wanting to do business with the previously sanctioned Southeast Asian country.

In the Basel Institute on Governance’s 2016 Basel Anti-Money Laundering Index (Basel AML Index), Myanmar is listed among the “top 10 highest risk countries”. With 0 being the lowest risk and 10 being highest risk, Myanmar scored 7.71 on the overall scale.

The report, issued in July, is an index published by the Basel Institute, an independent not-for-profit organization that, among other things, ranks countries according to their risk in relation to money laundering and terrorist financing.

The Basel AML Index isan established AML risk-rating tool used by the private sector for compliance purposes, and in the public sector for the purposes of research and policy measurement. In short, it measures the risk of money laundering and terrorist financing by country based on publicly available sources. A total of 14 indicators related to/including AML/CFT regulations, corruption, financial standards, political disclosure and rule of law are aggregated into one overall risk score. The overall risk score addressesstructural as well as functional elements in a country’s AML/CFT framework.

Basel’s risk rating is in line with the US State Department’s assessment of money laundering risk in Myanmar.

Every year, the US State Department assesses the money laundering situations in approximately 200 jurisdictions. The review assesses the significance of financial transactions in a particular country’s financial sector by evaluating elements such as: proceeds of serious crime, steps taken or not taken to address financial crime and money laundering, each jurisdiction’s vulnerability to money laundering, the conformance of its laws and policies to international standards, the effectiveness with which the government has acted, and the government’s political will to take needed actions.

The results of this review by the US State Department are published in the International Narcotics Control Strategy Report (INCSR) each year, pursuant to the the Foreign Assistance Act (FAA) of 1961.

The INCSR, among other things, identifies money laundering priority jurisdictions and countries using a classification system that consists of three different categories:

According to the State Department report, Myanmar’s economy is underdeveloped, as is its financial sector, and most currency is still held outside the formal banking system, although bank deposits have increased over the past several years.

The lack of financial transparency, the low risk of enforcement and prosecution, and the large illicit economy makes it potentially appealing to the criminal underground. Besides narcotics, trafficking in persons; the illegal trade in wildlife, gems, and timber; and public corruption are major sources of illicit proceeds, according to INCSR.

The 2016 Trafficking in Persons (TIP) Report, the US government’s principal diplomatic tool to engage foreign governments on human trafficking, lists Myanmar (or Burma, as listed in the report) as a “Tier 3” country, the least favorable category. In last year’s report, Myanmar was listed on the “Tier 2” watch list, so the situation has worsened.

No longer subject to FATF monitoring

Despite these hard lines by the Basel Institute as well as the US State Department, not all of the international community is so bleak about Myanmar’s future.

In June, during its Plenary Meeting, the FATF congratulated Myanmar for the ‘significant progress’ it had made in addressing the strategic anti-money laundering/Counter Terrorism Financing compliance process. The FATF is a global money-laundering watchdogfounded in 1989 by the G7 for the purposes of developing policies to combat money laundering.As a result, Myanmar is no longer subject to the FATF’s monitoring under its on-going global AML/CFT compliance process.

Further, the FATF reports that the country will work with the regional FATF-style body Asia/Pacific Group on Money Laundering, of which it is a member, to further strengthen its AML/CFT regime.

The CPI annually ranks countries “by their perceived levels of corruption, as determined by expert assessments and opinion surveys.” The CPI generally defines corruption as “the misuse of public power for private benefit.”

Myanmar ranks 147th out of 167 countries, and scores 22 out of a possible 100 on the CPI. According to TI, anything below 50 indicates “serious levels of public sector corruption”. 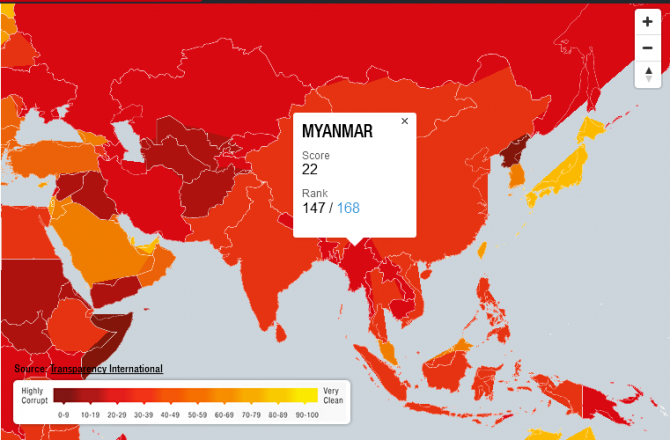 A number of news sites and international organizations have expressed concern regarding serious human rights violations in Myanmar.

Last month, a New York Times headline read “Dozens were believed to be killed as violence erupted in Myanmar” and last weekthe BBC warned that “Myanmar wants ethnic cleansing” of its Muslim population.

Human Rights Watch has also expressed its concern citing that the attacks on police posts and the counter operation by security forces is creating chaos in western Myanmar.In an article on its website from November 3rd, 2016, Human Rights Watch reports that,“Farmers’ livelihoods are threatened by abusive laws passed by previous governments, enforcement of poorly conceived land policies, and the authorities’ unwillingness to counter corrupt local officials who facilitate the displacement of small-scale farmers and villagers.”

“Well-connected business owners, militia leaders, and government officials are exploiting land laws and regulatory weakness to obtain land with little regard for the rights of the farmers who have been long using it,” according to Human Rights Watch.

In its Country Report on Terrorism dated June 2016, the US Department of State identifies and reports on levels of terrorist activities by global region and country.

The Report on Myanmar (or Burma, as identified in the report) states that the Voice of America (VOA), one of the broadcast entities which provides programming for countries with large Muslim populations, has closely monitored and reported on the continued worsening of relations between the Buddhist and Muslim communities in Myanmar. Many international organizations and broadcasters are concerned this tension may lead to widespread ethnic cleansing.

In addition, Radio Free Asia, a private, nonprofit broadcasting corporation, closely covered the ongoing plight of Burma’s minority Muslim Rohingyas, who have often had to bear the brunt of anti-Muslim communal violence and have been forced in many cases to live as refugees. The service also continued to cover the humanitarian crisis resulting from the Burmese government’s policies in Rakhine state.

Though the US has recently lifted sanctions against Myanmar, the continued concerns with regard to money laundering, corruption, human rights and terrorism should not go unnoticed.

Due to unfavorable rankings by the Basel Institute, Transparency International and US State Department, financial institutions and other corporations are well advised to maintain the country’s financial crime risk rating as “high” or a similar score. In addition, compliance officer should monitor financial and business transactions involving Myanmar for red flags of human trafficking and corruption, amongst others.

Financial institutions and other corporations should continue to assess clients and partners for these risks when doing business in Myanmaror with entities that have ties with Myanmar and keep a watchful eye on future developments.