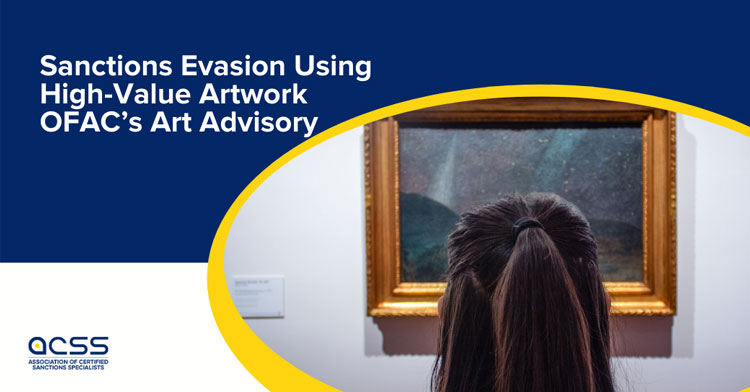 As of late, unconventional mediums of exchange and stores of value, such as cryptocurrencies, have been a focal point for governments looking to clamp down on money laundering, sanctions evasion, and other illicit financial activities.

That is not to say, however, that traditional investment vehicles aren’t being used to circumvent government authorities. Nor does this mean that government authorities have lost sight of these vehicles from a regulatory standpoint. The latest Art Advisory from the U.S. Treasury’s Office of Foreign Asset Control (OFAC) highlights this continued focus.

Following a number of investigations, OFAC issued the advisory, detailing the Potential Risks Arising from Dealings in High-Value Artwork. The publication highlights high-profile sanctions evading transactions and vulnerabilities in the high-value artwork marketplace. The document also provided guidance for implementing sanctions risk compliance strategies. The ACSS takes a deep dive into the advisory, pulling practical insights that are worthy of your consideration.

The advisory is the result of a series of prior enforcement actions and investigations that garnered mainstream media attention. In 2019, OFAC designated Nazem Said Ahmed, a Lebanon-based diamond dealer and art collector, a Specially Designated Global Terrorist (SDGT). OFAC identified Mr. Ahmed as a top donor to the terrorist organization Hizballah.

In a pre-emptive attempt to safeguard assets ahead of his designation, Ahmad was found to have stored personal funds in high-value artwork. This prompted OFAC to revise It’s Frequently-Asked-Questions (FAQs), reminding members of the art community of their sanctions compliance requirements.

In July 2020, the Permanent Committee on Investigations of the U.S. Senate investigated Arkady and Boris Rotenberg, Russian oligarchs who were designated by the OFAC. The final report, titled The Art Industry and U.S. Policies that Undermine Sanctions, found that both Arkady and Boris were linked to shell companies that had purchased high-value artwork. The presumed motive was to evade U.S. sanctions.

Another report published in March 2020 by the UN North Korea Panel of Experts uncovered troubling galleries and exhibitions in Beijing and Hong Kong. These galleries hosted artwork produced at the Pyongyang based Mansudae Art Studio, an UN-designated entity. Again, this was an apparent attempt by a blocked entity to raise funds while evading sanctions regimes.

Evidently, the findings of the U.S. Senate and UN point to there being inherent vulnerabilities in the high-value artwork market, making it a popular venue for blocked parties looking to evade sanctions regimes.

Vulnerabilities in the Art Market

The sale and purchase of investments in the high-value artwork market allow for a high degree of anonymity and confidentiality—there is an inherent lack of transparency in every transaction. Specifically, designated parties are at liberty to use shell companies and intermediaries to facilitate transactions while concealing their true identities.

With purposefully complex ownership structures and/or transfers being difficult to track, the marketplace for such investments is prone to exploitation by designated parties.

High-value artwork shares many of the same features of other asset classes used to evade sanctions. For instance, like gold, artwork has a degree of concealability and mobility that is beneficial to parties looking to evade sanctions regimes.

High-value artwork carries an additional benefit of being subjective in value. Parties to a transaction can inflate the value of an investment without drawing significant attention. Consequently, the properties of the market for high-value artwork, and of the art itself, offer an attractive option for parties seeking to evade sanctions regimes.

A point of confusion for operators within the high-value artwork space is the application of the Berman Amendment. The Berman Amendment refers to an exemption of regulations stipulated in the International Emergency Economic Powers Act (IEEPA) and the Trading with the Enemy Act (TWEA). It is as follows:

Despite this amendment, transactions involving high-value artwork are not categorically exempt from OFAC sanctions. Specifically, The Advisory clearly states that OFAC does not interpret the amendment to allow for blocked persons, or their facilitators, to evade sanctions by exchanging financial assets for high-value artwork or vice versa.

Consequently, OFAC will enforce IEEPA and TWEA-based sanctions on transactions involving artworks in which a designated party(s) has an interest, to the extent that the artwork functions primarily as an investment asset or medium of exchange.

Importance of a Risk Mitigation Strategy

Clearly, The Advisory sets a precedent for participants in the art market to implement risk-based compliance programs. In addition to typical due-diligence, operators within this space should reinforce their Know-Your-Customer (KYC) screening and should consult with OFAC when appropriate.

Specifically, apply for licenses and refer to the guidance published on OFAC’s website. In terms of what else to include in a risk-based compliance strategy and how to implement a proper framework, OFAC’s Framework for Compliance Commitments is a solid point of reference.

It’s worth emphasizing that participants in the art market who accidentally or unknowingly violate OFAC sanctions can still be held liable and subject to civil penalties in accordance with OFAC enforcement guidelines.