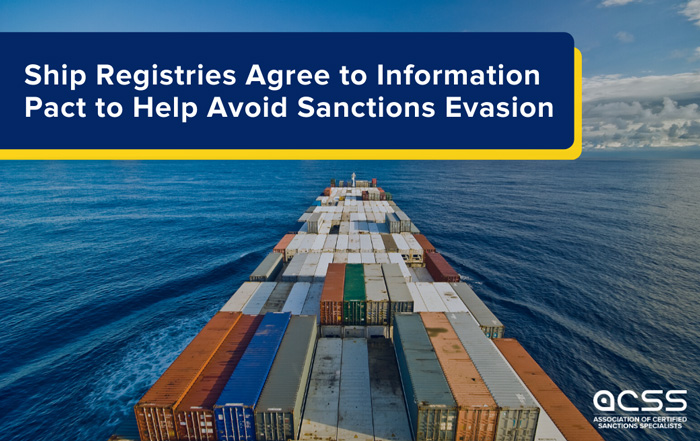 Jurisdictions like North Korea or Iran have long sought to evade sanctions through the maritime industry. To buy and sell commodities like oil or coal, some shipping companies manipulate identifying information associated with vessels. One of the reasons why this practice remains successful is the disjointed nature of information sharing and communication between flag registries of different countries.

International law requires that every ship be registered in a country, called its flag state. A ship’s registry exercises regulatory control over the vessel and inspects it regularly for safety, pollution and other issues including sanctions violations. If a ship is incompliant, the registry can revoke the registration of the vessel. Until recently, the registries did not share information on the reasons for de-registering a vessel. As a result, after being deflagged by one country, the vessel could apply for another country’s registry.

A new agreement called “Registry Information Sharing Compact” (RISC) between the largest ship registries, including Panama, has the potential to make it much more difficult for vessels to change their registration and easier for those in the maritime space to conduct due diligence.

“RISC is an agreement among ship registries to enable the removal of bad actors from their respective flag registries simultaneously,” says Eric Lorber, Vice President, K2 Intelligence FIN. “Its original participants were Panama, the Marshall Islands, and Liberia, among the three largest flag registries in the world. Four additional jurisdictions – St. Kitts and Nevis, Comoros, Honduras, and Palau subsequently joined by March 2020. Additional registries can join by singing onto a memorandum of understanding.”

He explains that RISC creates a communications channel among its participants so that, once one of them de-registers a vessel, it can immediately communicate that to the other participants, who have agreed to act in concert to prevent a vessel from trying to register with them.

The reason why this type of information sharing is so important is that illicit shipping companies have often engaged in “flag-hopping” to evade scrutiny, re-registering the same vessel under different registries to continue to engage in sanction evasion activity.

The United Nations Security Council panel of experts detailed several instances of this behavior in their March 2020 report on North Korea’s efforts to evade maritime sanctions. They described one vessel – the Fu Xing 12 – as adopting “a chameleon persona.” The ship, which is under investigation for exporting illicit coal, manipulated its identifiers by using four different ship names, sailing under three flags (those of China, the Democratic People’s Republic of Korea, and Sierra Leone), and employing two automatic identification systems on board.

In the report, the panel recommends that “Member States should encourage ship owners, operators, and charterers to incorporate into due diligence practices available data from organizations that provide data such as ship location, ship registry information, and ship flagging information, along with available information from the 1718 Committee.”

The United States followed suit by issuing its own guidance for the maritime industry. The Department of State, Department of Treasury, and the Coast Guard jointly released a detailed 32-page document on illicit shipping and sanctions evasion practices.

“It recommended that flag registries improve their due diligence efforts, de-register vessels they suspect have engaged in illicit activity, and take specific steps to share information,” says Lorber. “RISC is one result of these efforts.”

The US maritime guidance document even suggests that flag registry managers should consider, “requesting to join the Registry Information Sharing Compact (currently led by Liberia, Panama, and the Marshall Islands) via a memorandum of understanding.”

“RISC is a classic carrot-and-stick model of cooperation: flag registries within the compact can improve their reputations as responsible actors in the maritime space; those not in the compact conversely face the risk that they will be perceived as higher-risk if they do not participate,” he says.