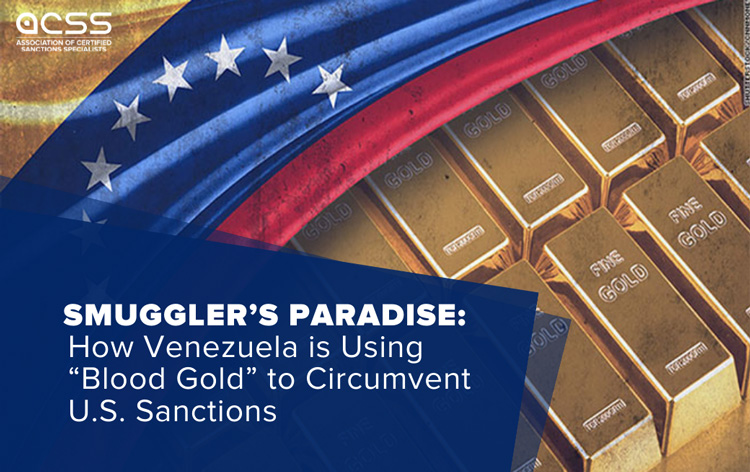 Over the past five years, a combination of rock-bottom oil prices and heavy U.S. sanctions on Venezuela’s oil industry has caused the South American country’s economy to crater. In the absence of formerly prolific oil revenues, gold exports serve as one of the last remaining financial lifelines for Venezuela’s embattled president, Nicolás Maduro, and his political allies.

Notorious for human rights abuses, pervasive corruption, and abysmal environmental controls, Venezuela’s gold sector was initially designated for sanctions by the U.S. Treasury Department in November 2018. Both the Venezuelan state-run ferrous metals mining company, Minerven, and its President, Adrian Perdomo, were subsequently added to the United States’ list of Specially Designated Nationals in 2019.  The U.S. government, which does not recognize the administration of Maduro, also warned “bankers, brokers, traders and facilitators” last year not to deal in “gold, oil, or other Venezuelan commodities stolen from the Venezuelan people by the Maduro mafia”.

There are two key reasons for why gold is so important to the Maduro regime. First, Venezuela is a rentier economy that imports virtually everything, including 75% of its food, nearly all medical supplies, most manufactured goods, and even gasoline. The government is therefore dependent on the proceeds it can raise from gold sales to supply Venezuela’s population with basic products and consumer goods.

The second, and often overlooked, reason is that targeted economic sanctions have effectively severed Venezuela from the U.S.-dominated global financial system. Transactions involving the Government of Venezuela and companies linked to Maduro often get trapped in foreign accounts due to restrictions on U.S. dollar-denominated wire transfers. With a diminished market for its oil exports and a non-convertible currency, the Maduro regime effectively lacks the ability to pay for vital goods even when it has the financial means to do so.

Conducting transactions with gold instead of hard currency solves this problem. In fact, it would be difficult to invent a form of exchange with greater immunity to international sanctions than gold. Gold possesses global value, rarely experiences dramatic price fluctuations, and, unlike oil, is easy to stash, conceal, and transport. Gold is also virtually untraceable once it leaves its country of origin and is refined.

In January 2019, the World Gold Council, an international gold-industry trade group, reported that Venezuela’s foreign-held gold reserves had dwindled by 69% to US$8.4 billion during Maduro’s presidency. Venezuela’s Central Bank gold reserves, meanwhile, allegedly fell from 129 tons to 90 tons in 2019.

With no detailed or reliable national reports, it is difficult to ascertain the exact volume and itinerary of Venezuela’s gold exports. As Bloomberg observes, the Venezuelan gold trade is “a multicountry, many-company scheme intended to obscure the flow of money and goods”.

Additionally, it is important to note that much of the country’s gold reserves have been sold off without approval from the opposition-controlled National Assembly. This is illegal under Venezuela’s constitution, and for good reason: government officials close to Maduro are suspected of having pocketed enormous profits from gold transactions over the past five years. The Maduro regime is therefore not only motivated to suppress information about gold transactions in order to circumvent international sanctions, but also to conceal extensive levels of graft and corruption.

However, it is widely known that the largest customers of Venezuelan gold are private and state-owned companies based in Iran, Turkey, and the UAE, many of which have close ties to the respective governments of these countries. According to the Venezuelan National Assembly’s finance commission, Venezuela’s central bank sold at least 73 tons of gold (approximate market value of US$3 billion) to companies in the UAE and Turkey between 2017 and February 2019.

The role of Iran and Turkey

Both Iran and Turkey have actively undermined U.S. sanctions on Venezuela.

As a pair of countries that are each struggling to withstand withering U.S. sanctions, Iran and Venezuela have drawn closer in recent years.

In March of 2020, Iran-based carrier, Mahan Air, which was designated under OFAC’s Iran sanctions regime in 2019, allegedly transported approximately $500 million worth of gold from Caracas to Tehran. Bloomberg, which originally broke this story, reports that this was payment for Iranian assistance in reviving Venezuela’s foundering gasoline refineries.

As Venezuela has become increasingly isolated from the international community, Turkey has stepped in as a powerful benefactor, including with vital humanitarian assistance. Turkey’s president, Recep Erdogan, has a rocky relationship with the Trump administration, and has made a point of encouraging investment and trade with Venezuela. Turkey is also desperate for gold in order to prop up the value of its currency and as a hedge against any future barrier to accessing U.S. dollars. Since the beginning of 2020, Turkey has purchased more gold than every other central bank combined.

In 2018, Turkey imported nearly US$900 million worth of gold from Venezuela, ostensibly to be refined and returned to Venezuela, despite no record of re-exportation.

The U.S. government’s patience with Erdogan is wearing thin. Senator Marco Rubio and Marshall Billingslea, assistant secretary for terrorist financing at the U.S. Treasury Department, each singled out Turkey last year for the country’s role in Venezuela’s gold trade, calling for expanded sanctions.

In 2019, Turkey was at the heart of a multi-layered gold-for-food scheme, in which gold was shipped to Turkey and converted into hard currency.  Subsequently, that cash was used to fund food exports from Mexico to Venezuela at huge markups.

The architect of this operation appears to be Alex Saab, a secretive Colombian businessman with close ties to Maduro.

In 2018, Saab reportedly signed a contract with Banco de Desarrollo Económico y Social de Venezuela (BANDES) to acquire Venezuelan currency to purchase gold from local miners at an inflated official market rate, instead of on the black market. BANDES was designated on March 22, 2019 pursuant to E.O. 13850, as amended, for operating in the financial sector of the Venezuelan economy.

According to OFAC, some of this gold was sent to Caracas to be refined, sold to the Central Bank of Venezuela, or BCV, (also under U.S. sanctions since  April 2019) and subsequently shuttled out of Venezuela to destinations such as the UAE and Turkey.

Turkish entities, meanwhile, purchased gold from the Government of Venezuela, depositing money in accounts in Turkey, which in turn would transfer funds to an account held by the BCV in Turkey.

OFAC did not provide any more details on how these financial transactions took place, but designated both Saab and his Turkey-based shell company Mulberry for sanctions in July 2019. OFAC later designated three individuals and sixteen entities with commercial links to Saab in September of the same year.

Why is the gold trade so difficult to suppress?

In addition to interference from foreign governments, there are two other very simple explanations for why U.S. sanctions have failed to curtail Venezuela’s gold trade: (1) the Maduro regime doesn’t need to use intermediaries with exposure to U.S. sanctions in order to export gold, and (2), trafficking schemes don’t leave much of a paper trail. Much of what is reported about the Venezuelan gold trade is based on circumstantial evidence, such as suspicious flight patterns, or large volumes of gold that inexplicably surface in Istanbul or Dubai at a steep discount to market prices.

In less than 24 hours, hundreds of millions of dollars worth of contraband Venezuelan gold can be loaded on a single chartered jetliner, surreptitiously flown to a third country with lax customs controls, and then re-exported as a product of that third country – obscuring the gold’s true origin by the time it reaches international markets. This type of trafficking operation is one that is most commonly associated with the African conflict-mineral trade, and, as the following example illustrates, is extremely difficult to trace.

In March 2019, a chartered Boeing 777 owned by Nordwind Airlines, a Russian company, landed at Entebbe International Airport in Uganda on two separate occasions with cargoes of gold ingots collectively worth over $300 million. Flight records indicate that the jetliner had flown directly from Caracas on both trips, and accompanying paperwork identified the ingots as property of Venezuela’s Central Bank.

According to Ugandan police, the cargo did not pass through the airport’s standard customs procedures, and was instead escorted just across the airport access road by private security to a compound owned by African Gold Refinery Ltd., or AGR. AGR has processed and exported more than 38 tons of gold since the refinery began operations in 2015. As very little gold is mined in Uganda, it is likely that most, if not all, of the gold processed by AGR originates from outside the country, including, allegedly, from conflict zones in South Sudan and Congo.

The only reason that details of this particular trafficking scheme surfaced at all is that the gold was seized and detained by Ugandan police for two months (before being returned to AGR). Without this intercession, it is hard to imagine how Uganda-based AGR would have been connected to Venezuela’s government. Indeed, once this shipment of gold was returned by the Ugandan government to AGR, its trace subsequently vanished.

Venezuelan sanctions are a foreign policy priority of the Trump administration, and OFAC has taken swift and severe action against both U.S. and foreign actors engaged in Venezuelan gold trafficking schemes.

Many of the main compliance precautions are fairly intuitive; companies that wish to avoid the long arm of U.S. sanctions enforcement should not be dealing in Venezuelan gold, oil, or other commodities under any circumstances, and should remain on the lookout for front companies and other Venezuelan entities linked to the country’s mining sector or the government of Venezuela.

Given Turkey’s involvement with the Venezuelan gold trade, compliance officers would also be wise to exercise tighter screening controls if dealing with Turkish firms with possible commercial ties to the Maduro regime.

The compliance hazard that may be most likely to land unsuspecting companies in hot water, though, comes from shady intermediary firms such as AGR, which are responsible for camouflaging the true origin of contraband gold. Like AGR, these businesses may be located in countries with few or zero above-ground economic ties to Venezuela. (Interestingly, as the Wall Street Journal originally reported, filings with the Securities and Exchange Commission from 2018 show that gold from AGR has made its way into supply chains at “General Motors Co., General Electric Co. and Starbucks Corp.”, among other U.S, companies.) These intermediaries have started to attract international attention, and could plausibly be among the next entities to be hit with secondary sanctions.

Until quite recently, U.S. sanctions targeting Venezuela’s gold trade has been a unilateral effort. This has started to change. Mounting public awareness about the Venezuelan gold industry’s appalling environmental and human rights record has spurred governments of other countries to take action.

In April 2019, the Canadian government added more than 40 names to its list of sanctioned Venezuelans, including Venezuela’s mining minister and the president of Minerven. Following the 2019 gold-for-food scandal, which implicated Mexican nationals for price-gouging, the Mexican attorney general’s office announced a $3 million fine for companies shipping food to Venezuela. Most recently, in July 2020, the United Kingdom’s High Court upheld the confiscation of $1.2 billion worth of Venezuelan gold that Maduro had attempted to repatriate from the Bank of England, ruling that Venezuela’s opposition government was the legitimate caretaker of this state property.

However, even without expanded multilateral sanctions, the scale and significance of Venezuela’s gold trade are likely to diminish. At the current rate at which the country’s reserves are being depleted, Venezuela will run out of gold in less than two years. And although Venezuela’s Amazon region contains vast gold deposits, current production levels don’t come close to replenishing the volume of gold that has been exported each year since 2015. It is also estimated that only a fraction of Venezuela’s domestic gold output actually winds up at the Central Bank; much of it is believed to be embezzled and smuggled overseas by the military, government officials, and organized crime.