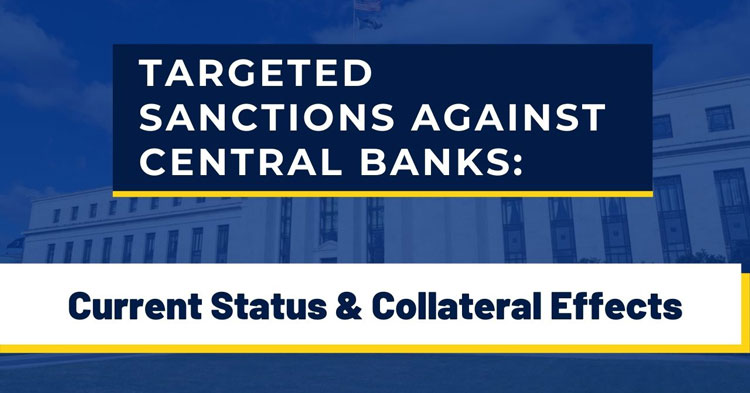 While Central Banks play a key role in every country’s economy, they also have been a target of sanctions in several cases. Particularly, in the case of governments that use Central Banks to evade sanctions and for money laundering purposes.

Generally, U.S. Department of Treasury Office of Foreign Assets Control (OFAC) sanctions against a country, involve Central Banks which are considered instrumentalities or subsidiary agencies of the government that act independently for the public good and whose obligations are backed by the government.

A Central Bank is a financial institution with control over the production and distribution of money, interest rates, and the credit of a country. Usually, the Central Bank is in charge of the monetary policy creation and provides member banks regulations within a country.

They regulate a country’s economy by enacting monetary policy, by easing or tightening the money supply and availability of credit within the country. On the other hand, private commercial banks are only allowed to issue demand liabilities, like checking deposits.

Additionally, a Central Bank sets requirements for the banking industry, such as the amount of cash reserves banks must maintain vis-à-vis their deposits. The Central Bank can also be a last resort lender to distressed financial institutions and governments.

Many Central Banks are autonomous institutions, which are not considered to be government agencies. Consequently, they are not legally owned by the government and have privileges and protections established by the country’s laws.

The Central Bank of Iran (CBI) has been sanctioned for at least 20 years. The sanctions prohibit U.S. companies from engaging in business with the CBI.

A decade later, in September 2019, the Trump administration, pursuant to E.O. 13224, targeted once again the CBI, this time for Iran’s alleged involvement in the attacks on Saudi Arabia’s oil fields. According to the U.S. government, the CBI actively facilitated the financial transfers for the Iranian Revolutionary Guard’s Quds Forces (IRGC-QF) and Hizballah. The CBI support included extensive access to foreign currency in the amount of several billions of U.S. dollars and euros to the IRGC-QF, and facilitation of IRGC-QF transfers to Hizballah.

The scope of the OFAC sanctions of September 20, 2019, included secondary sanctions. Now, non-U.S. persons could be the target of OFAC sanctions if their transactions with the CBI are deemed to be a “knowingly significant transaction” involving the CBI.

This means that non-U.S. banks providing significant financial services or that facilitate a significant financial service for entities designated in connection with Iran’s support for international terrorism or any Iranian person on the SDN List could be subject to U.S. correspondent account or payable-through account sanctions. To date, OFAC has not imposed secondary sanctions against foreign financial institutions engaging in businesses with the CBI.

The Central Bank of Venezuela (CBV) was designated on April 17, 2019, pursuant to E.O 13850. The measures include sanctions against individuals in key positions at the CBV.

On the other hand, reportedly, the Central Bank of Spain was assisting the CBV to evade sanctions. According to Bloomberg, CBV officials told contractors that going through the Central Bank of Spain is an option to make and receive foreign currency payments outside of Venezuela. They warned that it may still take at least a month to clear transactions due to increased scrutiny.

For assisting the CBV to evade sanctions, OFAC could have imposed sanctions on the Central Bank of Spain.

Sanctions on the Central Banks of North Korea, Ukraine, and Syria

North Korea’s Central Bank (NKCB), on September 26, 2017, pursuant to E.O. 13722, became subject to OFAC sanctions. OFAC designated the NKCB as a blocked agency, instrumentality, or controlled entity of the Government of North Korea. The sanctions against the NKCB is a response to North Korea’s ongoing development of WMD and violations of U.N. Security Council Resolutions.

On June 6, 2020, pursuant to E.O. 13660, OFAC designated the Donetsk People’s Republic Central Bank (DPRCB) and officials of the DPRCB in order to reinforce sanctions on Russia in the ongoing conflict-related to Russia and Ukraine. The DPRCB, based in Donetsk, Eastern Ukraine, conducts the regular payment of pensions and benefits to residents of the territory.

Finally, on December 22, 2020, OFAC added the Central Bank of Syria to the SDN List, underscoring its status as a blocked person. pursuant to E.O. 13582. These sanctions aim to discourage future investment in government-controlled areas of Syria, force the regime to end its atrocities against the Syrian people and compel its commitment to the U.N.-facilitated process in line with U.N. Security Council Resolution 2254. Moreover, OFAC argues that CBS has deep ties with Iran banks, which is a sponsor of global terrorism, and the CBS is an integral part of the regime’s strategy to increase the value of the Syrian currency and increase public revenues.

On the other side of the Atlantic, the  E.U. and the U.K. imposed sanctions on the Central Bank of Syria for providing financial support to the Bashar al-Assad regime.

To date, the other Central Banks mentioned in this article were only sanctioned by OFAC, not by the E.U. or the U.K.

The measures taken by the U.S. government against Central Banks, look to force a change in rogue governments which are involved in terrorism, money laundering, international conflicts, wars, WMD, non-democratic behaviors, and corruption.

The operational effects of the Central Bank sanctions issued by the U.S. are overwhelming since it affects all transactions and operations using U.S. dollars, involving U.S. banks, and U.S. financial institutions. Therefore, sanctioned Central Banks cannot do any type of transactions with U.S. financial institutions or U.S. persons, and operations with U.S. dollars are prohibited for any type of bank which includes European and U.S. banks.

Moreover, all Central Bank property and interests in property, and any entity that is owned, directly or indirectly, 50 percent or more by the Central Bank, that is in the U.S. or in the possession or control of U.S. persons are blocked and must be reported to OFAC. For instance, according to press reports, Citibank froze $342 million from an account owned by the Venezuelan Central Bank controlled by the Maduro regime, pursuant to OFAC sanctions all of Venezuela’s Central Bank U.S. based assets must be frozen by U.S. financial institutions.

In a 2008 speech in Florida, the U.S. Treasury Department former Deputy Secretary Robert M. Kimmitt delivered a clear compliance warning: “When dealing with Iran, it is impossible to know your customer.”

“Iran uses its state-owned banks to facilitate this conduct, and those banks engage in a range of deceptive practices. For example, some have requested that other financial institutions take their names off transaction documents when processing them globally. This practice, which makes it difficult, if not impossible, to determine the true parties in the transaction, is even used by Bank Markazi, Iran’s Central Bank,” Mr. Kimmitt added.

Financial institutions and banks that deal or intend to deal with Central Banks, should have a strong compliance program in place in order to prevent sanctions by OFAC.