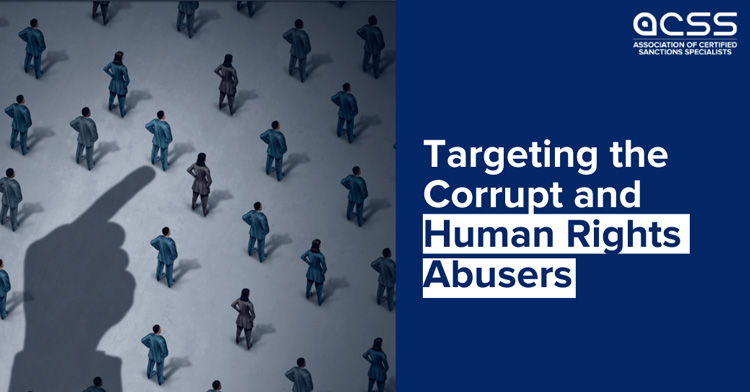 The United States Office of Foreign Assets Control administers many different programs that it uses to sanction individuals and entities, including the Iran Sanctions, Non-Proliferation Sanctions, and Counter-Terrorism Sanctions. There is one specific program; however, that is instrumental in combatting severe human rights abuse or corruption in a foreign country – the Global Magnitsky Human Rights Accountability Act, or GLOMAG, program.

“The Global Magnitsky Human Rights Accountability Act employs a regulatory regime, which has been traditionally associated with economic sanctions and export controls, to combat corruption and human rights violations,” says J. Daniel Chapman, CEO of Presyse – Compliance Systems and Expertise. “In doing so, it reflects a continued recognition of the connection between violations of corruption, export controls, economic sanctions, and human rights laws and of the associated need for their multi-disciplinary, multi-agency enforcement.”

It gives OFAC and the U.S. Department of State the authority to sanction human rights offenders or other persons who have materially assisted significant acts of corruption, freeze their assets, and ban them from entering the U.S.

EO 13818 listed the first 13 designations under the GLOMAG program.  These included Dan Gertler and related entities. According the Treasury Department press release, “Dan Gertler (Gertler) is an international businessman and billionaire who has amassed his fortune through hundreds of millions of dollars’ worth of opaque and corrupt mining and oil deals in the Democratic Republic of the Congo (DRC).”

As of May 2020, the United States Office of Foreign Assets Control has 195 entities and individuals in 25 separate countries listed as “Specially Designated Nationals and Blocked Persons” under the GLOMAG program.

The three countries that have seen the most designations are:

Cambodia: Respect for human rights deteriorated and the number of political prisoners increased in 2019, according to Human Rights Watch.

Serbia: In its latest country report, the State Department listed the targeting of LGBTI individuals and allegations of torture by police among the human rights issues in Serbia.

The purpose of the GLOMAG sanctions is to cut off corrupt individuals from the U.S. financial system. According to the U.S. Treasury Department FAQs, “all of the property and interests in property within U.S. jurisdiction of the designated individuals and entities are blocked, and U.S. persons are generally prohibited from engaging in transactions with them.”

According to Chapman, high-risk companies need to screen against the OFAC SDN list, especially if they do business in jurisdictions known for corruption. They can do this through the OFAC site or by using commercially available screening software. Publications such as the Transparency International Corruption Perception Index, the State Department’s Country Reports on Human Rights Practices, Freedom House and Human Rights Watch can help with determining your risk level.

If your company has heightened OFAC exposure, it may also make sense to go further and perform more detailed due diligence, such as research and screening for “politically exposed persons” and family members. It is essential to gather information on and verify beneficial owners of companies you have business relationships with as well, especially if those companies are in high-risk jurisdictions.

Organizations run the risk of hefty fines and reputational harm from OFAC if they do business with designated individuals. On the flipside, by ensuring compliance with OFAC sanctions, you are part of a larger effort to combat global corruption.

On International Anti-Corruption Day of last year (December 9), OFAC reaffirmed its commitment to stamping out global corruption by adding 44 SDNs related to corruption and human rights abuse to its list. The agency’s statement highlights why corruption is problematic, stating that, “It undermines the abilities of governments to adequately care for their citizens; erodes the legal, moral, and ethical fabric of society; and facilitates transnational crime.”

Here are just a few of the bad actors listed in the December 2019 Global Magnitsky Human Rights Accountability Act Annual Report. Their offenses illustrate the importance of OFAC sanctions in combatting egregious activity: