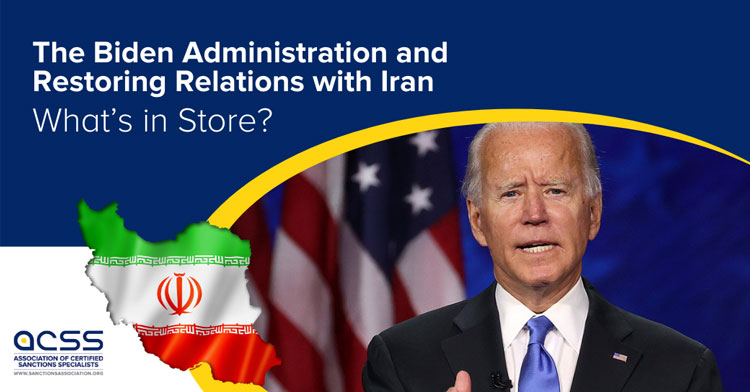 The Biden Administration and Reopening Talks with Iran – What’s in Store?

The Joint Comprehensive Plan of Action, or ‘JCPOA’, was signed on July 14, 2015 with Iran and what is known as the P5+1 (China France, Germany, Russia, the United Kingdom, and the United States), during the Obama Administration. The plan was for Iran to agree to eliminate its stockpile of medium-enriched uranium, cut its stockpile of low-enriched uranium by 98%, and reduce by about two-thirds the number of its gas centrifuges for 13 years. Iran’s compliance with the nuclear-related provisions of the JCPOA was to be verified by the International Atomic Energy Agency (IAEA) according to certain requirements set forth in the agreement. Subsequently, on May 8, 2018, President Trump announced that the United States would withdraw from the JCPOA and reinstate U.S. nuclear sanctions on the Iranian regime. From the start of Donald Trump’s tenure he called it a “horrible one-sided deal that should have never, ever been made”.

Following the Trump Administration’s “maximum pressure” campaign in the Middle East of the past 4 years, President Biden has a tough road ahead if he wants to restore relations with Iran.

Most countries in the world recognize that with regards to the “sunset” clause, that the expiration of the arms embargo has already taken place. Under the JCPOA’s “sunset” provisions, once key nuclear restrictions expire in years eight, 10 and 15, the Iranians are legally free to build up their uranium enrichment capability and thereby reduce the amount of time it would take to produce nuclear weapons. One of the most problematic points not agreed upon from the beginning also was that the JCPOA does not bar Iran from developing and testing ballistic missiles. While JCPOA critics and supporters argued over whether these aspects of the deal were unwarranted concessions or necessary negotiating compromises, they agreed at the time that these deficiencies should be rectified.

The reason being is to avoid the so-called “snap back “sanctions, of the JCPOA of 2015. In addition there are some who say that Iran was rarely in compliance with the JCPOA, for a number of reasons; most notably the lack of cooperation in providing access to the IEAA (International Atomic Energy Administration), for inspection of the nuclear sites through the years. The complaint from the beginning after the initial signing of the agreement in 2015, was that it did not do enough to hold Iran to task for their spread of terroristic activity, continuing human rights violations, and most importantly the lack of restrictions on ballistic missiles. Any Nuclear talks with Iran must have preconditions and the most difficult part will be coaxing Iran to the table without too many concessions.

A Long, Hard Road Ahead for Biden

Though it may be possible to come to an agreement with Iran without employing the previous Administrations’ “maximum pressure” sanctions campaign, it is thought that this won’t be an easy task. It is likely that any new agreement will only come to fruition if there is a give/take on both sides. Also, not all of the sanctions against Iran are JCPOA related, such as counterterrorism sanctions, and human rights which may be reversed in theory, but without a change in Iran’s behavior, Biden’s team may have trouble winning the approval of the U.S. Congress.

Unfortunately, Iran’s position has been that they won’t contemplate even coming to the table unless the U.S. terminates its sanctions, a position it has held forever, mostly due to Iran’s continued assurances that their nuclear weapons program is for peaceful purposes.

The Trump Administrations “maximum pressure” campaign hurt the Iranians and Iran deeply. The Iranian currency the rial lost 48% of its value due to the pandemic and U.S. sanctions, crude exports previously 2 million BPD were down to 300,00 -500,000, and in 2020 GDP was down roughly 9%. The U.S. sanctions made it difficult for Iranian businesses to access goods needed to make products, and it became difficult to find customers abroad due to the fear of secondary sanctions. (1)

But some Iranian manufacturers were able to stay afloat because of informal payment systems that don’t rely on banks to get money in and out of the country, in addition to the fact being, certain goods are not affected by “secondary sanctions.” (Goods such as food products or consumer products, including things like household products, like detergent or shampoo, were not affected).

Biden Administration – Bringing Both Parties to the Table

There are some who think these absurd demands and threats go well beyond what Biden officials have proposed for reopening nuclear talks, and should be rejected outright. Moreover, they prove why the Biden administration should not make any concessions to Iran — especially on security issues — in exchange for restarting the JCPOA or attempting to improve it. Without addressing each bullet point above I believe the most important step Iran must take should be adhered to as follows:

Reaching a legitimate agreement with Iran that addresses the threats posed by its nuclear and missile programs as well as its support of terrorism and meddling in regional disputes will be difficult. The Biden administration must recognize that there are no shortcuts to a good agreement with Iran and be willing to walk away if Tehran will not agree to the above preconditions. The U.S. can always keep the Trump administration’s successful “Maximum Pressure “ strategy, with its strong sanctions, in place until Iranian leaders are prepared to negotiate in good faith.

Most importantly Biden has expressed interest in renewing the U.S. relationship with its common allies, and one of the main reasons the JCPOA did have some validity was the agreement of the P-5 plus 2, not the U.S. going it alone, as it did during the Trump administration.

It was announced on February 19th, in the Wall Street Journal that the “U.S. and Iranian officials could hold nuclear discussions within the coming weeks under a plan by the European Union to bring the two sides together for the first time since President Biden took office, according to U.S. officials and senior diplomats.”

“According to the diplomats, the idea would be to hold an in-person meeting in the next few weeks of all remaining participants in the deal—Britain, France, Germany, Russia, China and Iran—with the U.S. invited as a guest.”

Unfortunately, on February 28, 2021, Iran rejected a European Union offer to hold direct nuclear talks with the U.S. in the coming days, risking renewed tension between Tehran and Western capitals.

Senior Western diplomats have said that Iran’s response doesn’t quash the Biden administration’s hopes of reviving diplomatic efforts to restore the 2015 nuclear deal. However, Iran’s decision has seemed to set a deadlock: Iran wants a guarantee that the U.S. will provide some sanctions relief, which Washington has so far ruled out.

*Robert L. Williams III, CAMS, is a financial crimes prevention professional with nearly 20 years of expertise in the sectors of banking, including the U.S. Patriot Act, BSA, AML, KYC, and OFAC, at three different foreign banks. He began his career at Credit Lyonnais/CALYON, and then eventually joined Credit Agricole in 2002. He then moved on to BNP Paribas where he was the OFAC Compliance Officer. Finally, he was employed at Standard Chartered Bank in a Sanctions Advisory role working with the Account Opening/KYC teams and Relationship Managers to mitigate internal and external sanctions concerns.