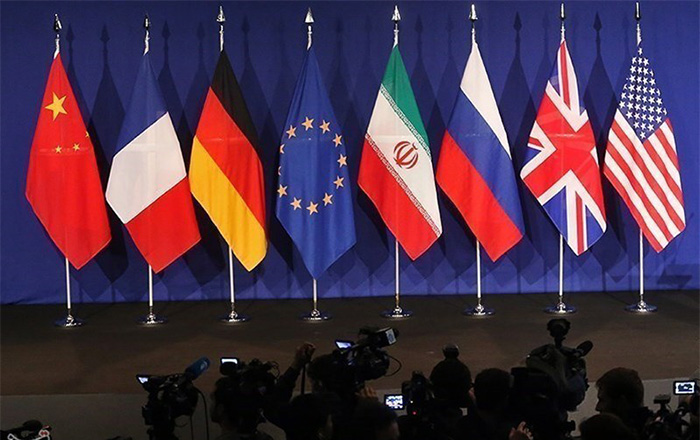 The EU Blocking Statute: US Perspectives and Possible Outcomes for Compliance

The U.S. withdrawal from the JCPOA and the return of sanctions has had a substantial impact on European companies that have increased their trade with Iran since 2015. Today, European businesses operating in Iran in violation of U.S. sanctions are at risk of being banned from the U.S. market.

In order to protect European businesses, in 2018 the European Council reactivated an old proposed regulation  – the 1996 EU Blocking Statute (Council Regulation (EC) No 2271/96)). The goal was to mitigate the impact of U.S. sanctions on E.U. companies and to maintain the growth of economic relations between the E.U. and Iran.

In response, the U.S. government has been clear that it will continue to enforce its sanctions regimes regardless of opposing measures.

On September2018, John R. Bolton stated that, “We do not intend to allow our sanctions to be evaded by Europe or anybody else.” This was a stark warning to European allies that the U.S. will sharply penalize European governments or companies that continue to do business with Iran.

What is the Blocking Statute?

The E.U. Blocking Statute protects its member states by ‘blocking’ the application of extra-territorial laws from countries outside the union.  As such, the Blocking Statute serves as protection for E.U. operators who are engaged in what the E.U. considers to be lawful international trade, commercial activities and movement of capital.

Ultimately, the E.U. Blocking Statute’s objective is to support the free movement of capital between Member States and third countries.  As other countries establish different or autonomous sanctions regimes, the Blocking Statute removes any restrictions on direct investments including, real estate, financial services or admission of securities to capital markets.

The Blocking Statute permits European companies to essentially ignore U.S. sanctions against Iran. Moreover, any decisions by foreign courts based on such sanctions would not be upheld in Europe.  Article 4 says:

“No judgment of a court or tribunal and no decision of an administrative authority located outside the Community giving effect, directly or indirectly, to the laws specified in the Annex or to actions based thereon or resulting there from, shall be recognized or be enforceable in any manner”.

OFAC has been notoriously known for penalizing companies based on the actions of their foreign subsidiaries or branches.

On April of 2019, despite being headquartered in the United Kingdom, Standard Chartered Bank agreed a settlement to pay OFACover $639 million for processing 9,335 transactions totalling $437,553,380 in violation of almost half a dozen OFAC sanctions programs. The majority of the conduct concerned Iran-related accounts maintained by SCB’s Dubai, UAE branches. Though the transactions in question were all made by a foreign subsidiary, they involved payments made to or through the U.S., therefore OFAC was able to assert jurisdiction.

In addition to primary sanctions, OFAC also has the power to assert jurisdiction over companies by the use of so-called ‘secondary sanctions’.

In the below box you can see how the long arm jurisdiction of U.S. secondary sanctions can amplify the effect of primary sanctions. 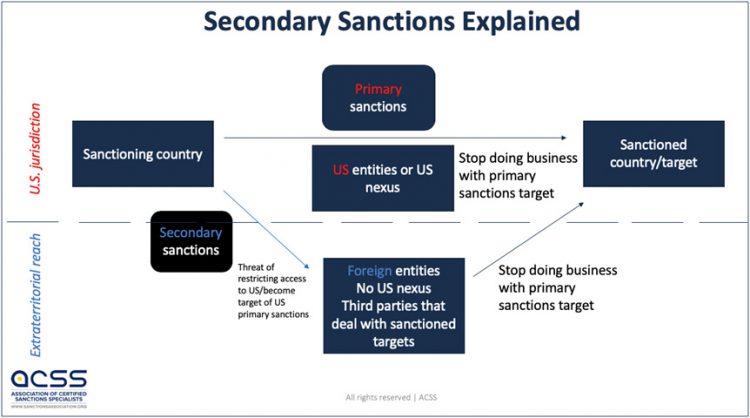 The application of U.S. secondary sanctions gives financial institutions and businesses around the world a choice to either halt transactions with Iranian counterparties or lose access to the U.S. financial system. Another danger is that they can also be placed on the sanctions list themselves.

Zhuhai Zhenrong Corporation and its CEO learned this the hard way. This Chinese company bought Iranian oil in violation of U.S. secondary sanctions. In particular, the company violated U.S.secondary sanctions imposed by E.O. 13846 of August 6, 2018: Reimposing Certain Sanctions With Respect to Iran. Despite not having a U.S. nexus, the company was placed on OFAC’s SDN list and was barred from conducting FX transactions within the U.S. The company’s CEO, Mr. Li, felt the harsh effect of U.S. sanctions as well. He was also listed as an SDN by OFAC and banned from travelling to the U.S. 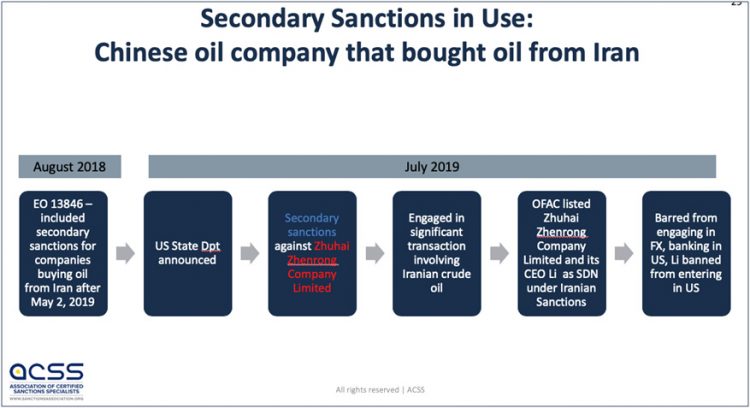 It is vital that U.S. compliance professionals ensure all subsidiaries and affiliates are in compliance with U.S. regulations, regardless of where they are in the world.  It is also important that those companies with no apparent U.S. nexus make sure they are aware of U.S. secondary sanctions that may prohibit their business dealings. For both types of companies, all transactions should be carefully screened and any nexus to sanctioned individuals or entities must be identified and quickly rectified.

As best practice, it is important to know and research new evasion typologies and research any red flags.  Compliance suites should ensure they have an established post designation process that will help them establish any shadow networks to avoid potential violations.  Utilizing open internet sources for research and conducting searches on all identifiers can yield more comprehensive results which in turn can help establish relationships and networks.

Lastly, know who you are dealing with.  Search for information that will help you understand who the client is and whether purpose of the transaction makes sense for that client or not.

*Glenda Juliano, CSS is the Economic Sanctions Manager at Raymond James in St. Petersburg, Florida. She is member of the ACSS and contributes regularly to the ACSS Editorial Task Force.