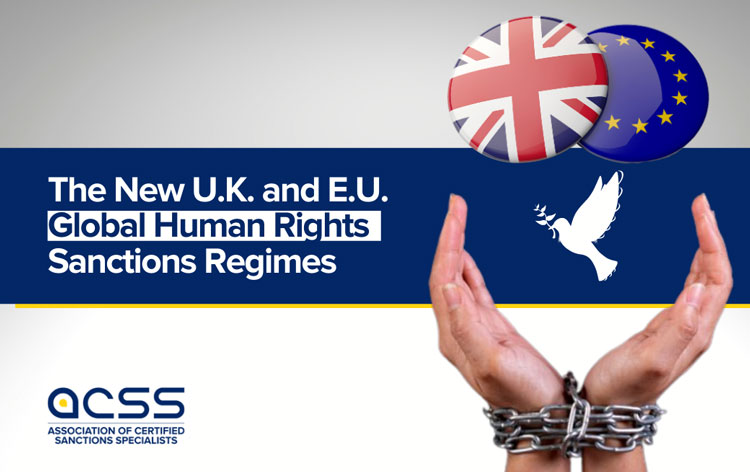 From the global pandemic, the Black Lives Matter movement, documented atrocities in Xinjiang and Myanmar, to repression in Hong Kong and Belarus, 2020 was a year that was unfortunately scarred by human rights violations and abuses. Accordingly, there has been incredible pressure for governments the world over to adequately respond and prevent human rights abuses, with sanction regimes being one of the most important tools at their disposal to do so.

With both the E.U. and U.K. having recently enacted their new, respective, Global Human Rights Sanctions regimes, the ACSS takes a comprehensive look at both, comparing and contrasting their similarities, differences, and methodology.

In short, the GHR regime allows the U.K. to impose asset freezes and travel bans in response to human rights violations and abuses worldwide. As a Magnitsky-style regime, this means that the U.K. is able to specifically target individuals and entities who have committed these violations and abuses wherever they are in the world.

For members in the business community, this means that any person or organization operating within a U.K. nexus will be subject to punishment should they deal with, or make available, any funds or economic resources to a person or entity who has been designated. OFSI’s GHR regime regulations dictate the penalties for such actions.

Designations and the Scope of the UK Regime

Included in the enactment of the regime, was the immediate designation of the first-wave of targets, including:

Since this initial wave of designations, an additional nineteen organizations and three entities have been listed as well. An updated copy of the U.K.’s sanctions list can be found here.

Critics point to the U.K. GHR regime as being far more narrow in scope when compared with other states who have Magnitsky inspired regimes of their own. As compared to its counterparts, the U.K. criteria for infringement on human rights is limited to the violation and/or abuse on the:

Foreign Secretary, Dominic Raab, in this Statement to Parliament, provided insight to the methodology behind this narrow definition when addressing the U.K. parliament last July, stating:  “We’ve deliberately focused on the worst crimes, so we have the clearest basis, to make sure we can operate the new system as effectively as we possibly can…We’ll continue to explore expanding this regime to include other human rights”

In addition, it’s worth considering that the U.K. has already compensated for this definition by introducing other regimes.

ACSS London Chapter Chair, Tom Cornell, elaborates:  “What we have already seen is the introduction of separate sanctions regimes dealing with related areas, most notably the U.K. sanctions regime relating to the misappropriation of state funds, which came into force in December 2020. We may see further sanctions regimes introduced in the UK that overlap with the EU’s broader approach to human rights violations.”

Though seemingly narrow, this concise approach as well as the speed at which the U.K. was able to list their designations, highlights OFSI’s newfound autonomy from the E.U., a feature that cannot be overstated.

Arguably, one of the few benefits that Brexit has afforded the U.K. is the ability to become its own sanctions authority that can swiftly execute on its own interests.

Prior to Brexit, the U.K. did not legislate its own sanctions policy. Rather, it had to lobby and advance their interests via the E.U., compromising and navigating through the demands of twenty-seven other member states. While the U.K. was therefore able to have their foreign policy interests amplified, with all E.U. states enforcing sanctions regimes that the U.K. had significantly influenced, the political capital to do so was significant. The question arises then, will U.K. sanctions regimes be effective when created on their own?

Sanctions regimes are effective when they are enforced in unison. So long as the U.K. maintains its bilateral relations and share this belief with its partners, there’s good reason to believe that the U.K.’s GHR regime, and future regimes will be effective. In fact, Dominic Raab spoke to this during his address last July, stating:

“Mr Speaker, in practise targeted sanctions are most effective when they are backed by coordinated, collective, action. So we will work closely with our Five Eyes partners, in particular the U.S. and Canada, which already have ‘Magnitsky-style’ sanctions legislation, and Australia, which is considering similar legislation. But we also strongly support efforts to bring an EU human rights sanctions regime into effect, and stand ready to co-ordinate with our European partners on future measures….”
Source: Global Human Rights Sanctions regime – Foreign Secretary’s Statement to Parliament

As Raab mentioned, with the U.S., Canada – and now the E.U. – having their own Magnitsky style regimes, the U.K.’s GHR regime will have the greatest opportunity to succeed and will provide insight into how the U.K. will coordinate and enforce its regime worldwide with its partners.

One feature of OFSI’s newfound autonomy, that’s worth emphasizing, is the speed at which the governing body will now be able to put forward and prioritize the U.K.’s interests. As already alluded to, a prime example of this is the U.K. introducing its GHR regime, and designating targets, nearly five months before the E.U. managed to ratify their own.

Prior to this regime, the E.U. did not have a non-country apparatus that would allow them to target specific human rights abusers. This translated to the E.U. either adopting U.N.- based sanctions or carefully sanctioning state actors, being mindful of the impact that their sanctions could have on their respective populations.

Now, with a GHR regime of their own, the E.U. will be able to replicate other sanctions actors, such as the U.K., U.S. and Canada, in being able to “target individuals, entities and bodies – including state and non-state actors – responsible for, involved in or associated with serious human rights violations and abuses worldwide…” In practice, this translates to travel bans and asset freezes against targets and will prohibit persons and entities operating within E.U. jurisdiction from providing funds and/or making them accessible to those designated.

It’s worth noting that the scope of the E.U. regime is broader thanks to its more inclusive definition of human rights abuses and violations. These include standard interpretations, such as genocide, crimes against humanity, torture, slavery, and extrajudicial killings. Moreover, under Article 2(d), these definitions are extended in the following terms:

Whilst no targets have yet been listed pursuant to this regime,  the E.U. has already published guidance for the regime, suggesting that listings are on the horizon. As Tom Cornell mentions, there will only be one way to assess the difference in scope between both the E.U. and U.K. regime: “The real test will be to compare the actual designations made under the UK and EU human rights regimes… It will be interesting to see whether the EU makes similar designations or adopts a more expansive approach.”

Maya Lester QC of Brick Court Chambers and europeansanctions.com explains: “In principle, both the U.K. and E.U. must apply a ‘proportionality’ analysis (which is part of E.U. law). The E.U. doesn’t have a ‘blanket’ approach and in theory is supposed to consider whether all its actions are proportionate, but the European court has never found a listing to be disproportionate because of the importance of the aims of the measures and the fact that licences are available.”

The U.K. GHR regime may differ from the E.U. regime in the way the “proportionality analysis” applies in practice.

“The U.K. has enacted “proportionality” by requiring all listings to be ‘appropriate’ including with regard to the purpose of the measures and the likely impact of a listing, so we’ll have to see how they apply that test in practice and what the courts make of it when the first court cases appear, ” Ms. Lester adds.

Here is a summary of the comparison: