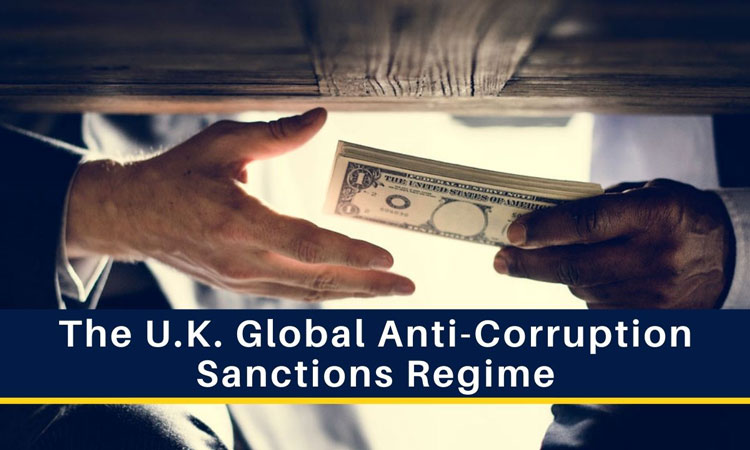 In July 2020, U.K. Foreign Secretary Dominic Raab introduced a landmark piece of legislation to the parliamentary floor: the U.K. Global Human Rights Sanctions Regime (GHR). As the U.K.’s first autonomous regime, it was the entryway for the U.K. on the world stage as an independent sanctions actor. In the Foreign Secretary’s announcement, he made reference to a forthcoming sanctions regime that would accompany the GHR to help reinforce its measures—less than a year later, he has made do on this announcement.

Last April, the U.K. introduced its second autonomous regime: the Global Anti-Corruption Sanctions Regime (GCR). As with the GHR, it is a Magnitsky style regime that allows the U.K. to designate specific individuals and entities rather than entire countries. Since the regime’s inception, the Office of Financial Sanctions Implementation (OFSI) has already designated twenty-two individuals.

In light of the GCRs introduction and rapid implementation, the ACSS takes a look at what led to the regime’s formulation, a deep dive into its provisions, and the targets that have been recently designated.

The U.K.’s focus on global corruption and money laundering is nothing new. In fact, since 2006, the U.K. International Corruption arm of the National Crime Agency has seized £1.1 billion in assets that were originally stolen from developing countries. In 2010, with the ratification of the Bribery Act, the U.K. formally criminalized bribery, and the failure to prevent it. Moreover, in 2016, the U.K. created a registry of beneficial ownership—a detailed list of those who ultimately owns a company, land, or property.

This is to discern ownership beyond shell companies and identify corruption, tax evasion, and money laundering. To this end, in 2017, the U.K. adopted a five-year anti-corruption strategy addressing six priorities:

In keeping these priorities in mind, the measures taken by the U.K. have resulted in tangible improvement. In 2020, the U.K. sat 11th on Transparency International’s Corruption Perceptions Index, in contrast to being ranked 20th in 2010.

The implementation of the GCR represents the continued focus of the U.K. on these matters. As mentioned during the announcement of the GHR on the parliamentary floor last year, the GCR will also reinforce the U.K.’s efforts to combat infringements on human rights across the world. The provisions to these ends are detailed below.

As its name suggests, the GCR is primarily concerned with preventing and combatting so-called ‘serious corruption.’ Objectives of the GCR are further detailed in the explanatory memorandum that was published alongside the regime.

Notably, the memorandum explicitly characterizes the bribery and misappropriation of property involving public officials as the most “atrocious” of corruption schemes. According to Regulation 4(2) of the regime, these activities define what is considered to be ‘serious corruption.’ To this end, the GCR provides the following definitions for each of these activities:

These definitions are supplemented by addendums in Regulation 4 of the regime.

In terms of designation criteria, a person or entity might be targeted if they are deemed to be “involved” in what is defined as serious corruption. Someone is considered to be an “involved person” if the person:

Pursuant to Regulation 6(3), a person is “involved” if they satisfy, but not limited to, the following conditions:

In addition, the U.K. government has a published a policy paper outlining the factors that will be taken into account when considering a designation.

The entities or individuals who meet these criteria and are consequently designated can be made subject to travel bans and asset freezes. Concerning the latter, persons are prohibited from dealing with, making available, or facilitating funds and economic resources to those designated.

Part 5 of the regime stipulates the regulations for exceptions and licensing. These measures are explained further in the statutory guidance published on the government’s website.

As already alluded to, the GCR is a Magnitsky style regime—it provides the capacity for the U.K. government to sanction specific individuals and entities rather than entire nations. OFSI has already made quick use of this powerful new tool in issuing a first wave of designations.

Effective April 26th 2021, the day that the regime was announced, twenty-two individuals have been designated — including the fourteen individuals involved the in the murder of Sergei Magnitsky. The press release issued by the U.K. government provides further details on those sanctioned:

It’s worth noting that this in addition to the seventy-eight individuals and entities that have already been designated under the GHR, based in Belarus, China, Myanmar, and Russia.

As Dominic Raab stated during his announcement, “corruption is not a victimless crime.” According to government figures, 2% of global GDP is lost to corruption and increases the cost of business by as much as 10%. “Corruption has a corrosive effect as it slows development, drains the wealth of poorer nations and keeps their people trapped in poverty,” the Foreign Secretary elaborated.

Already, the regime has been applauded by U.K. allies. Most notably, U.S. Secretary of State, Anthony Blinken, issued a formal statement which included:

“The Global Anti-Corruption-Sanctions Regime strengthens the UK’s efforts to counter corruption globally and complements ongoing U.S. initiatives, enhancing our ability to cooperate and coordinate on comparable human rights and corruption sanctions programs, such as the U.S. Global Magnitsky sanctions program.”

In coordination with fellow members of the G7, the implementation of the GCR will surely help remit the disastrous consequences that global corruption can have on innocent populations the world over.