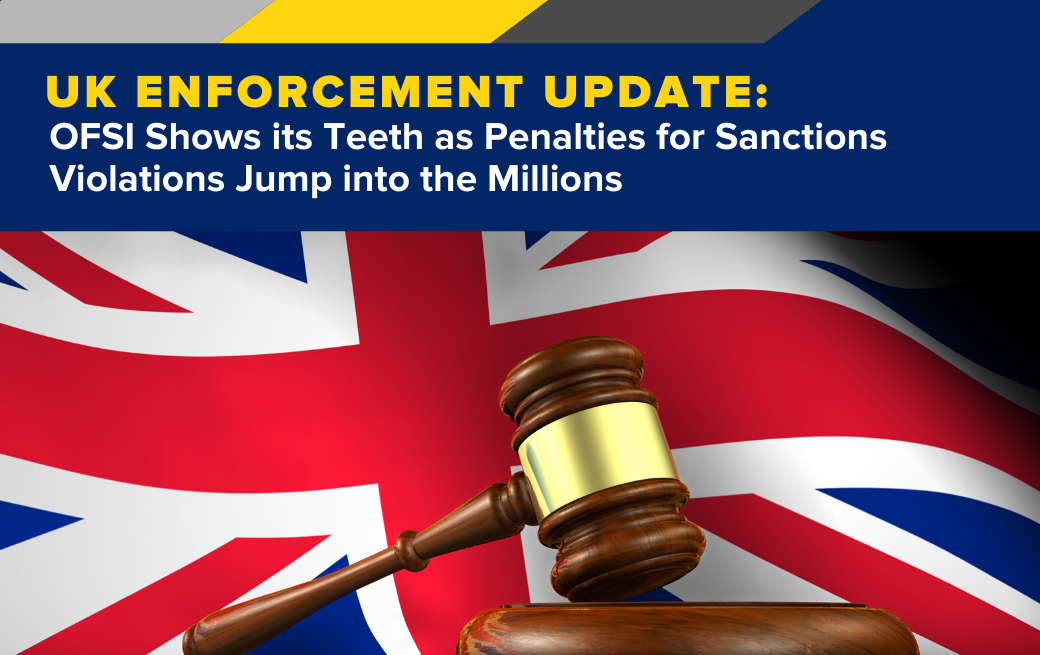 UK Enforcement Update: OFSI Shows its Teeth as Penalties for Sanctions Violations Jump into the Millions

After a slow start, the U.K. sanctions authority – The Office of Financial Sanctions Implementation (OFSI) – has now begun to show its teeth. However, having seen the size of the penalties imposed by OFAC in the last ten years, sanctions compliance suites should not be at all surprised to see the U.K. now taking a leaf out of the U.S. sanctions enforcement book.

New Kid on the Block

OFSI was only recently established within HM Treasury in March 2016. Since that time, it has been tasked with ensuring that financial sanctions are properly understood, implemented, and enforced in the United Kingdom.

OFSI has responsibility for the E.U. sanctions, including asset freezes, which restrict the ability of certain named individuals or entities to access funds and economic resources. That brings OFSI into contact with many banks, insurers and commercial parties, and means that OFSI gets regular reports of what is happening in the market.

OFSI’s Powers and the Risks Involved

In the U.K., breaches of sanctions attract criminal penalties, including unlimited fines and imprisonment. In addition, since April 2017, OFSI has also had the power to impose civil penalties for breaches of financial sanctions, pursuant to the Policing and Crime Act 2017. The penalties can be up to £1 million or, where the relevant offence involves a breach of the asset freeze, up to 50 per cent of the value of the relevant funds or economic resources, whichever is the higher.

These new powers make it easier for OFSI to impose penalties as the burden of proof is lower –  on a balance of probabilities for civil penalties rather than beyond reasonable doubt for criminal offences.

The effect is that companies which are considering engaging with OFSI regarding a historic breach, or thinking about a voluntary self disclosure, should be aware that it may be easier than they think for OFSI to impose a penalty. This needs to be factored in to any decision.

Raphaels Bank and Travelex – OFSI Begins to Show its Teeth

Since it was first given the power to issue fines in April 2017, OFSI has issued four penalties, with the amounts in question increasing significantly each time.

OFSI’s first monetary penalty was issued in January 2019 in respect of Raphaels Bank. A penalty of £5,000 (reduced from £10,000 to reflect the Bank’s disclosure and cooperation with OFSI’s investigation) was imposed on Raphaels Bank for breaching the E.U. sanctions against Egypt by dealing in funds totaling £200 that belonged to a target of the asset freeze.

In March 2019 OFSI announced its second monetary penalty, in the amount of £10,000, which it imposed on Travelex U.K. In breach of E.U. sanctions against Egypt, Travelex UK had dealt with funds of the same asset freeze target that Raphaels Bank had also dealt with despite having direct, in-person contact with the designated person and reference to the individual’s passport.

Both of these cases involved penalties that were greater than the sums that had been dealt with, a pattern which will be familiar to those who have looked at OFAC enforcement.

This reinforces the need for banks and others to screen carefully for designated persons, because the penalty if you get it wrong is so much greater than any benefit that you might have received from dealing with the sanctioned person. It also explains why banks in the U.K. and elsewhere are so concerned with ensuring that their customers are not engaged in activities that would or might be sanctionable.

In September 2019, OFSI announced that Telia Carrier UK Ltd had been issued with a monetary penalty of £146,000 (reduced from £300,000) for facilitating phone calls to SyriaTel.

While this may not seem like particularly egregious conduct, OFSI found that the company had repeatedly made funds and economic resources indirectly available to an E.U. designated entity over an extended timeframe. This highlights the need not only to check your customer but also to check their customer.

It also shows that, like OFAC, OFSI’s remit is not limited to banks and financial institutions – companies in all sectors need to be wary of OFSI.

Most recently, in March 2020, OFSI imposed a monetary penalty of £20.47 million on Standard Chartered Bank for breaching E.U. financial sanctions on Sberbank and its former subsidiary Denizbank A.S.

This fine represents by far the highest penalty imposed by OFSI to date, and shows that, whilst there was a perception previously that OFSI lacked teeth, in fact the regulator is willing and able to impose multi-million pound penalties.

The case arose out of loans that Standard Chartered reportedly made to Denizbank A.S. (a Turkish bank which was majority-owned by Russian bank Sberbank). E.U. prohibitions on making certain loans or credit available to Sberbank also applied to Denizbank, due to its majority ownership by Sberbank.

An E.U. exemption permitted certain loans and it appears that Standard Chartered erroneously believed that its loans fell within the exemption. In fact, 70 of the loans (with an estimated transaction value of over £266 million) did not meet the criteria to benefit from the exemption and OFSI’s penalty relates to 21 loans, with a combined value of £97.4 million.

OFSI’s report indicates that, on discovery of the mistake, Standard Chartered conducted an internal investigation and made a voluntary disclosure to OFSI. OFSI took the voluntary disclosure into account and reduced the penalty amount by 30% from £45 million to £31.5 million. Following Ministerial review, the fine was further reduced to £20.5 million (around 45% of the maximum penalty).

In order to steer clear of sanctions breaches, and OFSI’s enforcement arm, businesses need to appreciate the full complexity of the E.U. sanctions but also ensure that compliance teams and advisers have all of the facts relating to the underlying transactions.

What’s next for OFSI?

This trend in the U.K. towards greater enforcement and higher value penalties is of course in line with the approach in the U.S., where settlements routinely reach multiple millions of Dollars. International institutions with operations in London and the rest of the U.K. should be very wary of more high profile enforcement by OFSI.

We have also seen other E.U. countries moving towards heavier fines for sanctions infringements, such as those imposed by the Dutch court in respect of Euroturbine and its Bahrain subsidiary (over € 4 million in total) for breaching E.U. and Dutch export controls on Iran.

Penalties of this magnitude should act as a strong deterrent, and reinforce the need for companies to have robust and effective sanctions and compliance systems in place. An understanding and awareness of the complex and changing sanctions landscape, coupled with a strong corporate culture and commitment to compliance are key to minimizing a business’ exposure to sanctions related risks, as well as being a mitigating factor in any enforcement.

For more information about how your business can reduce its exposure, or on any of the issues discussed above, please feel free to get in touch.