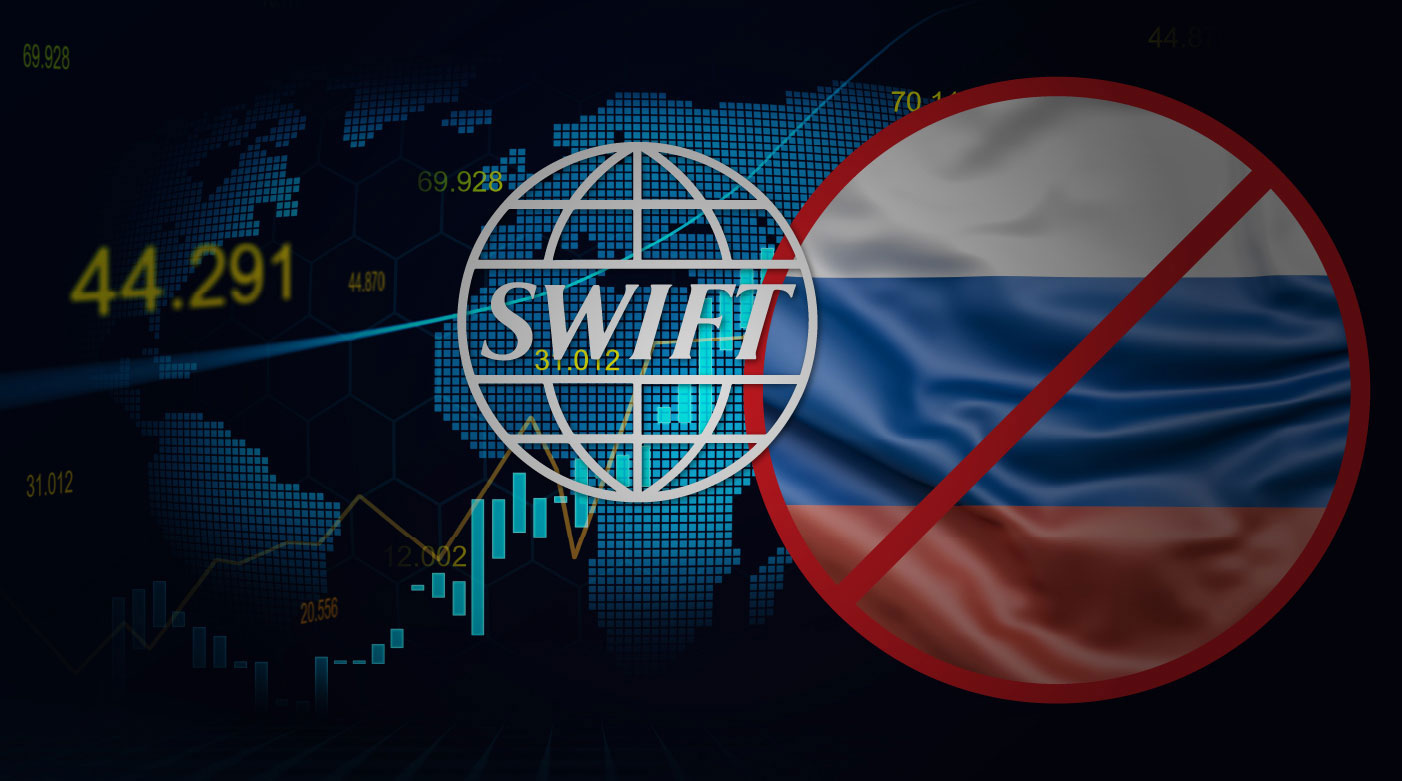 Russia’s banks look likely to be barred from SWIFT. In response to its invasion of Ukraine, the EU, US, UK, Canada and Japan announced they would not recognize Russia as a SWIFT member.

Other than understanding vaguely that SWIFT has something to do with banks and payments, many non-bankers know little about SWIFT. With that in mind, we shall elaborate on SWIFT, describe the potential impact on non-financial institutions if they were excluded from SWIFT, and discuss the steps Russia might take to mitigate the effects if it were no longer a member.

SWIFT is an acronym for the Society for Worldwide Interbank Financial Telecommunication. Legally, SWIFT is a “cooperative society” organized under the laws of Belgium. It is headquartered outside of Brussels. As such, SWIFT is subject to the laws of the EU. It is owned by the financial institutions that use its services. SWIFT’s list of shareholders is not publicly available. Although SWIFT performs an important public function, it is a private company.

SWIFT’s primary function is to provide a system through which banks and other financial institutions can send messages to each other, primarily about international payments. Over 11,000 financial institutions in 200 countries use SWIFT. It is important, however, to understand that SWIFT does not move money itself. Rather, SWIFT simply transmits messages from one bank to another. While these messages can fulfill a variety of functions, the most important is probably the transfer of payments from one bank to another.

Central to SWIFT are specific messages for categories of transactions, such as payments, security trades, or trade finance. Each message type is used for a specific situation. Frequently used message types include those for customer funds transfers (payments), transfers between financial institutions (so-called cover payments), and orders to buy or sell securities.

SWIFT message types are standardized, containing specific information in fields in a set order. They allow banks and other financial institutions to automate the sending and receipt of messages, increasing the flow of transactions enormously.

To understand how SWIFT works, it is necessary to outline exactly how money moves internationally. A steelmaker in Brazil, for example, decides to purchase a shipment of nickel from a supplier in Russia. If it is a straightforward payment, the Brazilian steelmaker will direct its bank to “pay” the Russian supplier.

As is common in such cases, the transaction is denominated in US dollars. Of course, the Brazilian bank won’t actually send the money directly to the Russian company. Rather, it will transmit a SWIFT message – in this example, a message type called the MT103 – to its correspondent bank in the US, precisely because the payment is denominated in dollars. If the Russian supplier is using a Russian bank, the Russian bank will also have a correspondent bank in the US, for the same reason.

In all, no fewer than five separate fund transfers occur, involving four banks in the course of one simple transaction. SWIFT accomplishes all of this in one message.

As well as providing a standard format, SWIFT is a communications system. Messages are transmitted from banks through three SWIFT operating centers in the Netherlands, Switzerland and the US. SWIFT handles only international payments – domestic or intra-EU payments typically use different systems, such as SEPA in the EU. In 2021, the volume of messages on SWIFT averaged 41 million per day.

What the West Did

Following Russia’s invasion of Ukraine on February 24, 2022, attention was immediately directed towards the non-military steps the West might take to place pressure on Russia. The expulsion of Russian banks from SWIFT was one of the most prominent proposals. Indeed, on February 26, 2022, only two days after the invasion began, the EU, US, UK and Canada announced they would prevent certain Russian banks from using SWIFT. Japan issued a similar announcement on March 1, 2022. The initial announcements provided no details, however.

On March 1, 2022, the EU Council issued a decision, Council Decision (CFSP) 2022/346, implementing at least part of these sanctions. The decision states that “it shall be prohibited as of 12 March 2022 to provide specialised financial messaging services, which are used to exchange financial data” to seven Russian banks – VTB Bank, Bank Otkritie, Novikombank, Promsvyazbank, Rossiya Bank, Sovcombank, and VEB, or to any entity established in Russia and owned (directly or indirectly) by more than 50% by one of the above entities.

As an entity organized under the laws of Belgium, SWIFT is legally bound by this decision. This means that SWIFT cannot carry messages involving these seven banks, regardless of the currency involved or the geographic path of the messages. As of March 11, neither the US, UK, Canada, nor Japan had issued any formal legal documents along the lines of the EU decision. Given SWIFT’s status as an EU entity, though, it is unclear that any such additional action is necessary.

Initial news reports described the exclusion of Russian banks from SWIFT as effectively cutting Russia off from the global financial system. This is, at least, a slight overstatement. First, not all Russian banks have been excluded. The single largest Russian bank, Sberbank, continues to have, in theory, access to the system.

While SWIFT is by far the single most important messaging system for international banking transactions, handling around 90% of international payments in 2020, there are alternatives. Indeed, Russia has its own payments system, the System for Transfer of Financial Messages, though it currently operates only within Russia.

Of potentially more significance is the Cross-Border Interbank Payment System (CIPS). Although CIPS includes several Western banks as shareholders, it is primarily backed by the People’s Bank of China and focuses mainly on transactions denominated in RMB.

India also has an alternative, the Structured Financial Messaging System (SFMS). This is the primary method for interbank payments in India, although it can handle international transactions.

But none of the alternatives has the reach of SWIFT. While Russian banks might be able to re-route some payments and other transactions through them, the transition would likely take some time.

Other major currencies in trade include the Japanese yen and the British pound. While Russian banks could use other systems for payments in other countries, exclusion from SWIFT will make it much more difficult to execute transactions in US or Canadian dollars, euros, pounds, or yen.

Other Actions By the West

The EU, US, and other countries have increased operational difficulties for Russian banks by imposing more legislation. While they have not been cut off from SWIFT (yet), a recent Executive Order bars US banks from providing correspondent or payable-through accounts to Sberbank.

The US, EU, UK, and Japan have all imposed sanctions, including the freezing of funds, against certain Russian banks, including VTB Bank, the second-largest bank in Russia. Taken together, these measures will make it increasingly difficult for Russian companies to do business with the West.

One final alternative for Russian and Western companies is to work with their banks to make arrangements for payments to flow outside SWIFT. This will require both willingness on the part of Western banks to make these arrangements and the ability to do so.

Given the current climate, it is likely that the West will direct further financial sanctions against Russia, including possibly the extension of the exclusion from SWIFT to all Russian banks. This will make it even more likely that Western banks will be extremely reluctant to perform any transactions involving Russia, whether with a sanctioned Russian bank or not.

The exclusion of some Russian banks from SWIFT does not mean it is impossible to do business with Russian companies, but it does make it more difficult. The impact of this move is compounded by the other sanctions imposed so far. More will likely follow.

The good news for sanctions professionals is that the exclusion from SWIFT is essentially self-executing; SWIFT does the work. The bad news is that this may make it difficult or impossible to complete transactions and that your colleagues may bombard you with urgent requests for advice. At this point, the most realistic conclusion is that sanctions against Russia are likely to expand.

Scott Nance of Langley Compliance Consulting is an attorney in the Washington DC area, specializing in economic sanctions and anti-money laundering.