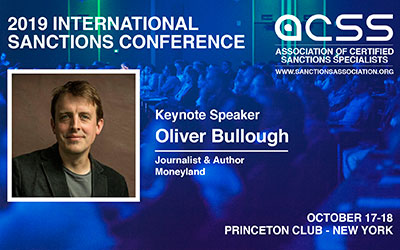 The Association of Certified Sanctions Specialists recently spoke with Oliver Bullough, an award-winning journalist and author from Wales who specializes in writing about the former Soviet Union and financial crime. His most recent book is Moneyland, a history and exploration of kleptocracy, and how it is enabled by Western professionals.

This interview discusses how he came to write about corruption and sanctions evasion, how he researched his book, his thoughts on current sanctions regulation and enforcement and his future projects.

He will be the Keynote Speaker at the upcoming ACSS International Sanctions Conference in New York City on October 16 – 18.

Association of Certified Sanctions Specialists: Could we start with some of your background? What led you to be interested in the topic sanctions evasion?

Oliver Bullough: I’m from the UK, but I’ve always been very interested and fascinated by Russia and the former Soviet Union.I moved out there when I finished university and that led me to working as a journalist.

I suppose it took me a surprisingly long time, but eventually I noticed that almost everything I was writing about, which was autocracy, the rise of authoritarian governments, the collapsing infrastructure, terrible health outcomes and so on; all of these things were at their root caused by corruption. The catalyst for that realization was the Ukrainian revolution of 2014.

As I talked to Ukrainians and their experiences, I was able to see the astonishing greed of the now ex rulers of Ukraine and everything that had left behind. That led me to think about corruption as a problem and the realization that all of these corrupt individuals, these astonishing corrupt politicians and businesspeople – all of them without exception – had hidden their wealth via some form of western country; all of them.

It was a bit of a shocking realization to me, this idea that corruption is not something that happens elsewhere. It’s not an amusing quirk of a foreign culture. You know, you pay a bribe here and it’s just a story to come back with as a traveler. But actually, corruption is something deeply embedded in the globalized financial system. And that, in fact, our western countries, the places that we think of as being clean are absolutely central to how corruption works, how kleptocracy works. And that’s what led me to work in this area. And that’s, you know, what I do now, what I write about.

ACSS: How long did it take you to research the book?

Oliver Bullough: It came out last year, so 2018, and I started researching it in 2014. But it was very much informed by prior experiences. When I thought I’d been writing about something else, it turned out I was actually researching corruption. I just hadn’t realized it. So, you know, there was an awful lot of shoe leather and conversations that went into just getting to the starting point of writing it.

In terms of the actual material in the book, almost all of it comes from about a four year period between 2014 and 2018.

ACSS: In your book, you discuss a couple of your projects that didn’t go forward because they were stopped for various reasons. Did that help you with your research for the book?

Oliver Bullough: It’s funny how many things that were hugely frustrating at the time, turned out to be very illuminating once the dust had settled and my pulse had returned to normal. Having a whole documentary film, which I’d spent months working on killed literally two days before it’s premiere by lawyers working for an oligarchy, you know, that was a very good weight loss process. I think I lost about five kilos that week.

It’s often when researching a project that the things that go wrong or go badly at the time, you think they went terribly. But actually, in retrospect, they’re often the most valuable bits of research, as are the people you meet along the way. You can’t plan for them obviously, but you kind of got to keep an open mind and realize that everything is a bit of a learning experience if you want it to be. When you immerse yourself in writing about the unscrupulous super rich, then it’s not just you. It’s not just me happening to the unscrupulous, super rich, they also happened to me. The book was about all these things.

ACSS:Can you tell me more about how oligarchs evade sanctions?

Oliver Bullough: Essentially, it’s removing their names, their fingerprints from their assets. Sanctions tend to be imposed by, or certainly the sanctions I talk about, tend to be imposed by western countries, the European countries and the US in particular, a few others as well. And these are the same countries where oligarchies like to keep their money, and like to keep their children, their mistresses, and their wives. Obviously, they very much want to be able to avoid the identification of those assets as theirs.

So, there’s the usual tricks of hiding assets behind shell companies. Though, that has become harder than it used to be. It’s still not impossible. Five, 10 years ago, you’d see them just hiding assets behind British companies. Now they tend to have to go to the Seychelles or Hong Kong or whatever. It’s much harder than it was, but it’s still possible.

A lot of it is more about using what might be called human shell companies – using your wife or your children. The story that I intend to talk about at the conference is about a man who did both of those things initially. He used shell companies and then he just used his children very successfully. I mean, the European authorities never picked up on what he was doing. His lawyers successfully prevented me from ever writing about it, so as far as I know, no one’s ever found out.

It’s depressingly easy to do in Europe; in the US it’s harder. I think the US investigative bodies are more proactive. The global role of the dollar makes it easier for US authorities to do things. But, it’s still perfectly possible to hide in the cracks in the global system; essentially to anonymize your assets and then to use them with impunity in a way that the sanctions are trying to stop people doing.

Oliver Bullough: That’s sort of a two-edged weapon in a weird way. The Trump administration has been bad for efforts to impose more transparency on the world economy. They’ve obviously moved against efforts to impose transparency on the extractive industries and so on, which has been bad. But, on the flip side, the Trump administration has been a catalyst for other forces in America to try and force through transparency.

There’s a bill at the moment, which is trying to bring transparency to US shell companies and that would be very positive. So, it’s looking bad, but perhaps the experience of the Trump administration will have radicalized his opponents to a certain extent, and they will end up doing more to try and clean things up. Because the US is a real outlier in terms of transparency. The US is by far the worst jurisdiction in the world when it comes to transparency and that’s something that would really be good if they did something about.

ACSS: Are you working on any new projects?

Oliver Bullough: At the moment, I’m pitching a book about the role of the UK, specifically. The UK is the first tax haven and the inventor of offshore. It would be a specifically UK-focused project, but then I want to build on that and make it a global project with future books.

I think I’ve focused too much on tax havens. They tend to be fun places to visit and it’s easy to see what’s going on, but I haven’t focused enough on what’s been going on in the big onshore economies – the US, obviously the UK, the Netherlands, a few of the others.

I’m also going to focus in the future on the role of professionals and institutions in the big onshore economies in enabling financial crime, enabling sanctions evasion, enabling all sorts of things. That’s the long term. I think the answer to all these problems has to lie in the big onshore economies. You can’t expect the tax havens to sort this out. It’s something for London, Washington and other western countries to sort out.

ACSS:What are your thoughts on the sanctions themselves? Do you think that they’re working?

Oliver Bullough: It’s difficult to say because I don’t really know what “working” looks like. You’ve got South Africa where you could say that sanctions worked. But, at the other end of the distribution you’ve got maybe Russia. Are sanctions working there? It’s a counterfactual; we don’t know what Russia would be like without sanctions. Right?

So, I’m not sure to be honest. I think that the sanctions that are unilateral or not very multi-lateral (just European and American); they can work in the short term. But in the long term, people tend to find a way around them, whether that’s using alternative financial centers like Dubai or just finding ways to exploit the weaknesses in our own regulations to avoid our own institutions.

ACSS: What are the weaknesses in sanctions regulations and enforcement?

Oliver Bullough: The primary vulnerability is the inconsistency of regulation and enforcement of those regulation. I’m a big rugby fan and we have something in rugby called a dog like defense. A dog like defense is when one player rushes up too quickly ahead of all the others and you create these big gaps between the defenders. That’s essentially what you have if one country acts unilaterally. That’s a real problem because you create gaps through which bad guys can go quite easily.

It’s very frustrating if you’re being essentially forced to come up at the speed of the slowest country. There has to be a middle way between not allowing your policy to be dictated by the policy of Luxembourg or Dubai, but while simultaneously trying to act with as many people as possible. So you end up with a “coalition of the willing approach” or possibly larger than the original coalition of the willing.

ACSS: Of the western countries, which have the most holes in their sanctions regulations?

Oliver Bullough: I think the EU is the worst to be honest. The EU sanctions system just doesn’t make any sense at all. It doesn’t really have any kind of underpinning. Unlike the US, which has the power to just issue sanctions, the EU doesn’t really have that, so they have to be defendable via law.

Essentially, particularly with regards to sanctions of foreign country nationals, you’re very much dependent on the legal systems of foreign countries to have done some work to justify the sanctions in the EU. So, if the maintenance of EU sanctions is dependent on, say, the Ukrainian justice system, you’re doomed because nothing ever happens in Ukraine. So, it’s a real issue. Whereas the US doesn’t have that, because the US is a country with a set strong central government, so it’s different.

Would you like to learn more about how to stay compliant with global sanctions? Come join us at the ACSS International Sanctions Conference, where you can tune into Oliver’s keynote speech as well as 30+ other experts about hot topics in sanctions today.