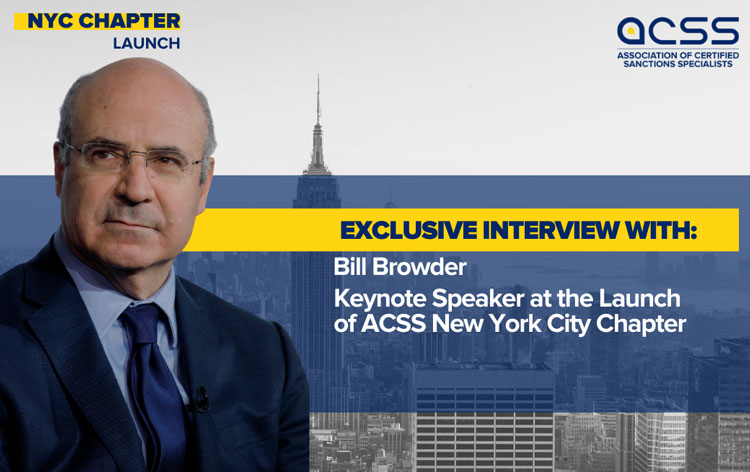 The event’s keynote speaker, Bill Browder, joined the virtual launch to share his remarkable story with ACSS members and to discuss the impact and progress of Magnitsky Act sanctions around the world.

From Investor to Activist

As the founder and CEO of Hermitage Capital Management, Bill Browder was one of the largest and most successful foreign investors in Russia in the late 1990’s and early 2000’s. He also emerged as a prominent shareholder activist during this time, working to expose management corruption and corporate malfeasance in Russia’s partially state-owned conglomerates.

In 2005, shortly into Vladimir Putin’s second presidential term, Hermitage’s relationship with the Russian government soured. The hedge fund’s Moscow offices were raided by police on multiple occasions, while Mr. Browder found himself blacklisted as a “national security threat” and denied entry to the country.

Two years later, one of Hermitage’s attorneys, a young tax lawyer named Sergei Magnitsky, uncovered an elaborate tax fraud involving corrupt officials from Russia’s Interior Ministry. When Hermitage contacted the Russian government with these findings, Russian authorities opened a criminal case against Magnitsky and placed him in pre-trial detention. For eleven months, he endured squalid conditions, severe beatings, sleep deprivation, and untreated pancreatitis. After repeatedly refusing to sign a false confession of guilt, Magnitsky passed away in police custody at the age of 37, leaving behind a wife and two young children.

Sergei Magnitsky’s fate would haunt Mr. Browder for the rest of his life. “But from that moment forward”, Mr. Browder reflected, “I knew that there was only one thing I could do with my life, which was to put aside my business activities and devote all of my time and resources to pursuing justice for Sergei Magnitsky”.

Following extensive lobbying and publicity work conducted by Mr. Browder and the Magnitsky family, the Sergei Magnitsky Rule of Law Accountability Act was signed into law by President Obama in December 2012. Later expanded to apply globally, the Magnitsky Act authorizes the U.S. government to sanction those who it sees as human rights offenders, freeze their assets, and ban them from entering the country.

As of 2020, over 100 individuals and entities from around the world have been sanctioned by the U.S. government under the Magnitsky Act, including 18 Russian nationals implicated in the death of Sergei Magnitsky.

In the past three years, U.K. and Canada have also each adopted sanctions legislation modelled on the Magnitsky Act, while the E.U. Council of Ministers adopted a draft proposal in December 2019 for a European Magnitsky Act. The governments of Australia, Japan, and Switzerland are all currently debating similar legislation.

The Impact of the Magnitsky Act

A key attribute of countries with weak rules of law and high levels of corruption and patronage, Mr. Browder stressed, is that kleptocrats and other individuals who have enriched themselves through illicit means can lose everything just as quickly. They therefore are highly motivated to secure their assets outside their own country. The Magnitsky Act makes this far more difficult.

“The moment that a Russian oligarch or African dictator is added to the U.S. sanctions list – or any other Western country’s sanctions list for that matter – is the moment that they become a persona non grata in the world of banking and finance. Nobody wants to do business with a person on a U.S. sanctions list – the potential penalties make this an insane risk.” To illustrate this point, Mr. Browder cited an incident where a Russian oligarch who was sanctioned under the Magnitsky Act tried to move hundreds of millions of dollars from his Swiss bank account back to Russia. Although Switzerland is not part of the Magnitsky sanctions regime, the Swiss bank not only refused to move the oligarch’s money but also proceeded to fire all other clients that presented a possible risk of being designated by the U.S. Office of Foreign Asset Controls (OFAC).

“Beyond the individuals and entities who are designated for human rights sanctions, the Magnitsky Act has helped produce a new, ascendant commercial culture of caution that proactively weeds out and ostracizes kleptocrats and human rights offenders. The threat of international sanctions counteracts the profit motive for banks to take these people on as clients, even if they haven’t yet been added to a sanctions list.  And I think that’s a very powerful development in the good versus evil fight that’s going on every day around the world.”

Would you like to learn more about sanctions issues that impact professionals in New York City and the Tri-State area?  Sign up for the ACSS NYC Chapter!

1-on-1 Interview With Bill Browder

In addition to delivering the keynote speech at the virtual launch of ACSS’s NYC chapter, Mr. Browder also sat down with ACSS to answer some further questions about the Magnitsky Act, human rights activism, and the expansion of Magnitsky laws in recent years. 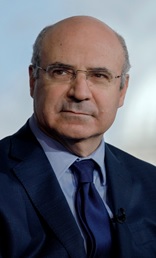 ACSS: What is the next step for you and what are your top priorities moving forward?

Mr. Browder: We’re nowhere near done with our mission. Currently, there are seven countries that have Magnitsky Acts; the U.S., Canada, U.K., Estonia, Latvia, Lithuania, and Kosovo. The two big countries – the two big players on deck – are the European Union, which would add another 27 countries to the list, and Australia. In both cases there’s a very high probability of passage, but until it’s actually done it’s almost a full-time job to continue to put pressure on the governments or politicians to make sure that it gets done correctly. And so that’s our main objective in the short term.

The second objective is to ensure that the Magnitsky Act is actually used against human rights abusers and kleptocrats. Adoption of Magnitsky laws is only the first step; governments also need to be active in designating human rights offenders for sanctions and following through on enforcement. For example, Canada and the U.K. have each recently adopted Magnitsky laws, but have quite short sanctions lists compared to the United States. Proper and thorough implementation is crucial.

ACSS: London and the Channel Islands, among other financial centers in the West, are notorious havens for dark money from Russia.  What more do Western governments need to do to ensure that local financial institutions aren’t facilitating human rights abuses and kleptocratic behavior in Russia and elsewhere?

Mr. Browder: Something that is not widely known is that the moment the U.K. passed its Magnitsky Act, the British Overseas Territories of Guernsey, Jersey, the Isle of Man, Gibraltar and the Cayman Islands immediately passed their own versions of this law. This was a significant development. In terms of assets, it was arguably more powerful than even the U.S. or the U.K. enacting a Magnitsky Act, because so many oligarchs, kleptocrats, and corrupt political elites from around the world keep their money in these offshore tax havens. If dark money is suddenly at risk in a place like the Cayman Islands, it’s potentially devastating for many of these bad actors.

Having said that, again, it all comes back to implementation. You can have a Magnitsky Act and you can have a very lax government that doesn’t do anything with it. I don’t know exactly what the capacity of the law enforcement or regulatory authorities is like in these overseas jurisdictions, but my impression is that they are often quite unprofessional and weak.

ACSS: How have Putin and his oligarch allies responded to British Magnitsky laws and the EU’s framework for a European version of the Magnitsky Act?

Mr. Browder: In terms of legal recourse, Putin and his cronies always make the same noises and make the same threats in response to international sanctions. But the Russian government’s ability to retaliate with legislation is really quite limited. They will generally add a number of Western politicians to the Russian anti-Magnitsky sanctions list, but all this means is that a certain group of British lawmakers or U.S. lawmakers or Canadian lawmakers can no longer go on vacation to Siberia or keep their money at SberBank. It doesn’t amount to a very formidable or effective response.

ACSS: Do you see any major impediments to further adoption of Magnitsky Act laws in the West?

Mr. Browder: One thing that is important to understand about the European Union is that it cannot make foreign policy decisions without unanimous consent from every Member State. This grants extraordinary power to small countries that, in some cases, have weak democratic institutions and pervasive corruption problems of their own. Some of these governments may also have very close ties to Putin himself.

For many years, momentum behind a E.U. Magnitsky Act had completely stalled because Hungary was using their veto power to stop it.  Unfortunately, a very possible scenario is that when the Magnitsky Act does finally get passed by the E.U., its scope and implementation will be severely limited by this unanimity rule, because a handful of countries will acquiesce to Russian opposition.

ACSS: Do you feel that the Magnitsky Act has altered public perceptions/expectations about sanctions and how they might be used, particularly when it comes to human rights?

Mr. Browder: This is really the first time that there has been a strong, punitive tool to sanction human rights abusers in other parts of the world. What the Magnitsky Act has done is to provide leverage to victims all over the world – to create at least some level of consequence for people who profit from terrible crimes. Now that the Magnitsky Act exists in seven countries, marginalized ethnic groups like the Uighurs in China and victims of government atrocities in countries like Venezuela are able to visit Washington, London, and Ottawa and raise awareness for their issue, and in some cases succeed in getting the perpetrators of their abuse sanctioned. Having a Magnitsky Act in place helps facilitate real, concrete action on behalf of human rights victims.

I actually testified in front of the Canadian parliament in July on hearings about the genocide against the Uighurs and made a very strong push for Canada to impose Magnitsky sanctions, as the United States has already done, on the Chinese officials most responsible for the Uighur genocide.