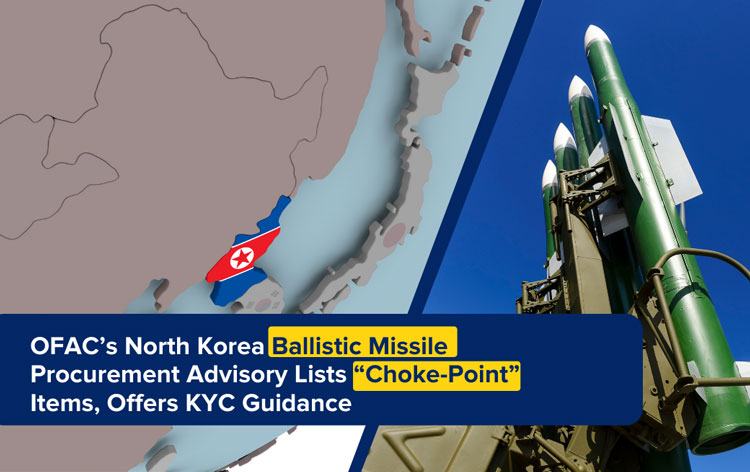 Many different materials are needed to build a ballistic missile, some of which are items that are commonly purchased by individuals or companies who do not seek to build a weapon. Suppose you are a seller of those materials in the United States. In that case, you are obligated under sanctions law to ensure you are not conducting business with designated countries, companies, or individuals.

If either the U.S. Office of Foreign Assets Control or the U.S. Bureau of Industry and Security finds that you have engaged in prohibited transactions, you could face monetary penalties.

Shea Cotton of the Middlebury Institute’s Center for Nonproliferation Studies explains that a single violation can result in up to $250,000 (or twice the value of the underlying transaction) and criminal penalties of $20 million.

“It’s common, though, for transaction to involve multiple violations of different sets of regulations and laws,” he says. “For example, a financial transaction between a US and Iranian bank may violate US sanctions on Iran and simultaneously violate US bank fraud or AML laws. As a result, the total penalty amount can skyrocket.”

OFAC and BIS sought to clarify North Korea related sanctions compliance expectations by issuing an advisory on North Korea ballistic missile procurement at the beginning of September. The document stated that individuals and entities in the electronics, chemical, metals, and materials industry and those in the financial, transportation, and logistics sectors should note this guidance.

According to the United Nations Democratic People’s Republic of Korea Panel of Experts, a group that studies and reports on DPRK efforts to evade UN sanctions, the following “choke-point” items are ones that North Korea likely needs to import for its ballistic missiles program:

This list is not exhaustive, however. You can look to both the OFAC advisory and UN PoE report for examples of other goods, including heat-resistant metals, guidance systems, and gyroscopes.

“Even if something is not listed on a control list, it can still be covered if there is reason to believe it is going to benefit a WMD or missile program,” says Cotton. “The UN now typically includes “catch-all” clauses when it sanctions proliferation sensitive goods or services. Some states have even gone further and are developing language to extend “catch-all” requirements to luxury goods as well, which are also prohibited, but difficult to define, under UN sanctions.”

According to the advisory, “Individuals and entities producing or trading in these products, or providing related financial or other services, may wish to ensure that they can make informed decisions about providing products or services to specific customers.” It also straight-forwardly advises that appropriate “Know Your Customer” procedures based on assessed risk “should make this possible.”

The advisory includes several tips to help companies, including those developing, implementing, and routinely updating a risk-based sanctions compliance program. It states that businesses should consider certain factors when assessing risk, including geographic location, customers and counterparties, products and services, and the company’s size and sophistication.

OFAC also states that companies should refer to its Framework for OFAC Compliance Commitments when implementing their compliance programs, making sure to include the five essential components of compliance:

Conducting due diligence and knowing your customer can sometimes be tricky. North Korea does not want companies to see that they are trying to procure materials for their ballistic missile program, so they employ tactics to disguise themselves.

Cotton says that while initially it seemed like the flurry of new sanctions that came in 2016 and 2017 threw North Korean commercial and procurement activities off balance, they have adjusted.

“Using tactics developed originally to smuggle arms and drugs, the regime has adapted those to previously newly sanctioned activities like using overseas laborers to generate funds or disguising coal shipments as legitimately sourced from Russia or China instead of illicitly source from North Korea,” he says. “In cases like this, North Korea frequently takes advantage of the ease some jurisdictions offer in setting up companies.”

Those companies, set up in places like Hong Kong, can at first glance appear unconnected with North Korea. They are then used to purchase assets or conduct transactions that evade sanctions and generate income for the regime, sometimes with unknowing partners. These evasion tactics often break national laws governing fraud and anti-money laundering laws instead of just UN sanctions, explains Cotton.

However, there are KYC procedures and “red flags” you can look out for to help weed out risky customers. If you are an exporter, the advisory includes these fact patterns that would warrant further scrutiny:

Where to find more guidance

If you need more guidance on how to comply with North Korean and other sanctions, the advisory also offers a few hints as to where to look: