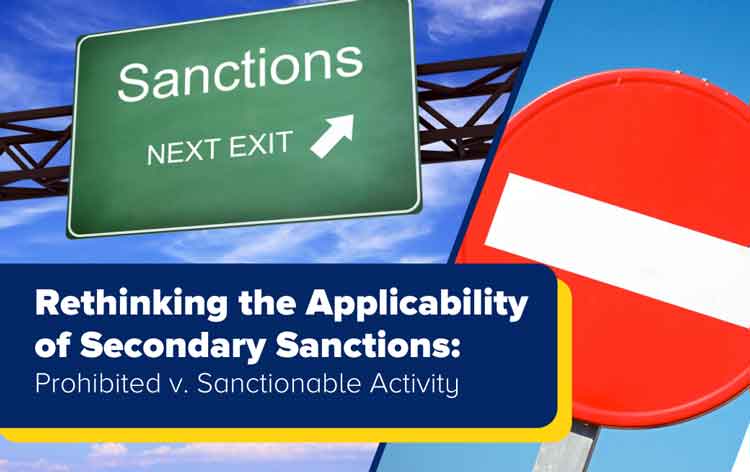 In recent times, the U.S. Government has not been shy about imposing sanctions on activities with no nexus to the U.S. in order to increase its global crack down. The imposition of these so-called ‘secondary sanctions’ have resulted in an even further global reach of OFAC restrictions and rules.

But what is the difference between primary and secondary sanctions, and when do they apply to foreign persons/institutions?

The Applicability of Primary sanctions, or ‘Prohibited’ Activity

An activity is ‘prohibited’ when an authority could enforce the prohibition against one who engaged in such activity. In other words, an act is prohibited if by engaging in it a person could be civilly or criminally liable. For this type of activity, the U.S. Government can only exercise its jurisdiction over ‘U.S. persons’. This includes U.S. citizens and permanent resident aliens regardless of where they are located, all persons and entities within the United States, all U.S. incorporated entities and their foreign branches (and in certain programs, foreign subsidiaries owned or controlled by U.S. companies). The vast majority of sanctions fall into this category of prohibited activity and does not apply to non-U.S. persons or foreign entities.

The Three Types of Secondary Sanctions, or ‘Sanctionable’ Activity, that Need No U.S. Nexus

An activity is considered ‘sanctionable’ when it is not prohibited, however, could result in restrictions for a person who knowingly conducts such activity. Although such restrictions are designed to negatively affect a non-U.S. person who knowingly engages in a sanctionable activity, they in fact limit the ability of U.S. persons in doing busienss with those non-U.S. persons (e.g. limitations on U.S. Persons to provide certain financial services to that non-U.S. person). It is important to note that in this case, the non-U.S. person who knowingly conducted a sanctionable activity would be neither criminally nor civilly liable per U.S. sanctions laws. For example, if a person provides material support for certain listed persons then the person who provided material support could be punished by being added to the SDN list of the United States Treasury which is not a criminal sentence or civil penalty, but an administrative action of the United States Government.

Restrictions put in place by the U.S. Government vary depending on the sanctions program, which can range from being added to OFAC’s Specially Designated Nationals (SDN) List to losing the ability to use U.S. correspondent banking services, and/or exclusion from certain procurement contracts. As such, it is important to see how these potential restrictions could affect a non-U.S. person. If none of those restrictions could have a considerably negative effect on a non-U.S. person then that person might choose to engage in a sanctionable activity.

Another way to highlight the difference between prohibited activities as opposed to sanctionable one is to look at the policy objectives behind such measures.

As the disagreements among countries about the scope of sanctions has increased, one way for the U.S. Government to ensure its sanctions have the intended effect is to deter actors over whom it has no jurisdiction from engaging in activities which would offset the effectiveness of existing U.S. sanctions. This is done by making some activities sanctionable rather than prohibiting them. In other words, sanctionable activities are not primarily against U.S. foreign policy goals (e.g. terrorism, malicious cyber activity, regional influences, and human rights violations); rather they are activities that secondarily help a U.S. primary sanction targets by nullifying the intended negative economic pressure caused by the U.S. prohibitions for U.S. persons.

A Step-by-Step Approach to Assess the Risk

A non-U.S. person can assess the risk of potential sanctions breaches by following the below steps:

Initially, it should be determined whether an activity is prohibited had it been done by a U.S. person. If the response to this question is negative, then the activity does not bear the risk of breaching the U.S. sanctions or in other words, it may not be considered as a sanctionable activity if conducted by non-U.S. persons. If; however, the response to this question is affirmative, then a non-U.S. person needs to ask another question. 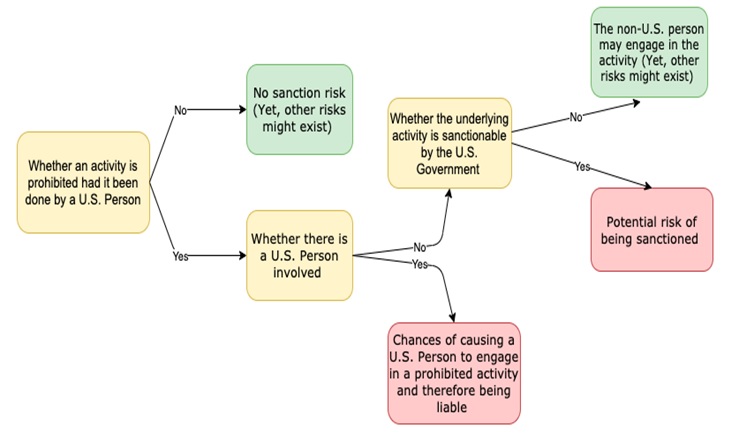 Additional Points to Consider when Engaging in Sanctionable Activity

In assessing the risks associated with getting engaged in a sanctionable activity, a non-U.S. person needs to keep a few points in mind.

Therefore, a non-U.S. person should take into account several factors, not only the value of a transaction, engaging in sanctionable transactions.

*Amir is a Sanctions Specialist within BNP Paribas’ Compliance Department in Paris. Amir advises on applicability of U.S. sanctions in the European market of the bank. He also advises on matters related to E.U. restrictive measure.