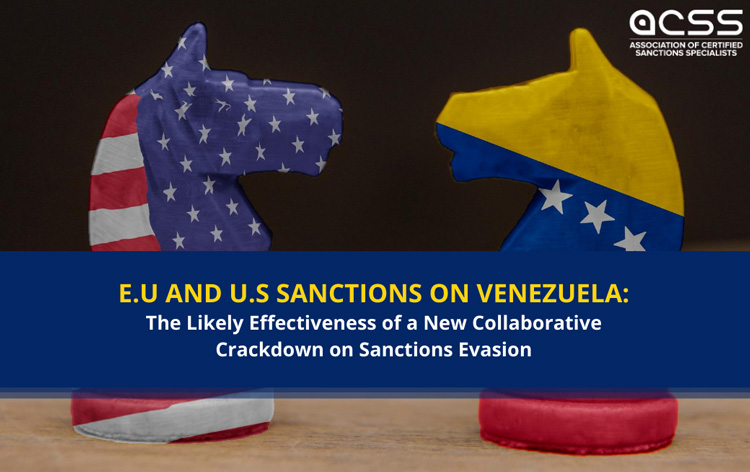 E.U. and U.S. Sanctions on Venezuela: The Likely Effectiveness of a New Collaborative Crackdown on Sanctions Evasion

Following the departure or ejection of its ambassador to Venezuela in June 2020, the European Union added 11 leading Venezuelan officials to the E.U. sanctions list. The individuals have been deemed responsible for acting against the democratic functions of the Venezuelan National Assembly, notably stripping the parliamentary immunity of several members, including its President, Juan Guaidó.

It seems that the European Union has decided to tighten its grip on the Maduro regime by adopting a more U.S.-based approach to its sanctions policy. But will this decision by Europe to walk with the U.S. have an effect and contribute to change in Venezuela?

To understand this in context, it is worthwhile to look at the overall U.S. sanction policy against Venezuela and compare it with E.U. restrictive measures.

In the case of Venezuela, the E.U. adapted restrictive measures on November 2017 that are targeted in nature and include the following:

While the respective trade or financial restrictions on certain sectors limit the actions of the Venezuelan Government, they may not be effective, as the Venezuelan government may simply purchase the goods from other jurisdictions like Russia and China. There is no mechanism in place for the E.U. to punish these nations, as the E.U.’s restrictive measures do not include extraterritoriality. In other words – the E.U. does not enforce sanctions against companies outside of its jurisdiction.

U.S. Sanctions Against Venezuela and Comparison to E.U. Restrictive Measures

The U.S. has traditionally applied a much broader set of sanctions in comparison to the European Union.

The U.S. sanction regime against Venezuela started in 2014 by freezing the assets of seven Venezuelan officials. Since then, the U.S. government has tightened its policy with various Executive Orders (E.O.s) that shifted from a targeted sanctions policy to a sectoral sanctions policy, gradually increasing the pressure on Venezuela since Maduro’s illegitimate re-election in 2018. The most severe measures that have been put in place are the sanctions against the Venezuelan government, articulated in E.O. 13884, which includes the state-owned company Petróleos de Venezuela, S.A. (PdVSA). This is almost a complete trade embargo against Venezuela since Venezuela’s oil sector accounts for more than 98% of its revenues, according to OPEC. As a result of Executive Order 13884, Venezuelan oil revenue dropped significantly from 2.4 million barrels per day in 2015 to 1 million barrels per day by the end of 2019.

If the embargo against Venezuela only meant that the U.S. was not buying Venezuelan oil, it would still allow the Maduro regime to sell oil to other countries. This is what happened over the last two years, and China became the number one importer of Venezuelan crude.

But Executive Order 13884 has another element, which is the application of extraterritoriality. Extraterritoriality means that the U.S. has the ability to enforce laws and regulations regarding persons, property, or activities beyond its territory. It is designed to influence the behavior of other non-U.S. entities that are aiding the Maduro regime.

In the Venezuelan context, it can only mean the curtailing of the oil sector and cargo carriage. If the Venezuelan government cannot sell their oil to third parties, it has very few other means to generate revenue.

Interestingly, when the aforementioned Executive Order 13884 was initially signed, it did not punish third parties for buying Venezuelan oil. That changed at the end of 2019, when China suddenly stopped officially buying Venezuelan crude.

But China never actually stopped buying. Crude from PDVSA was sold to China through a delivery method via Malaysia using so-called ship-to-ship transfers. By going dark and switching off transponders, ships meet with other ships offshore and offload cargo. In fact, selling oil through ship-to-ship transfers became a common strategy for Venezuela to sell its oil.

It is worth discussing whether a combination of various autonomous and multilateral sanction regimes of Western democracies will be more effective in pressuring the Venezuelan regime and driving change or if the current sanctions environment allows Venezuela to continue to evade sanctions—with the support of friendly states like Russia and China.

It is generally accepted that when more countries support sanctions against another country, the higher the chances of success. In addition to the E.U. and the U.S., other countries like Canada, Panama, Mexico, and Switzerland have issued sanctions against Venezuela. Switzerland, for example, just joined the E.U. in adding the same 11 Venezuelan officials to its list of sanctioned individuals.

Take for example, Mr. Juan José Mendoza Jover, Second Vice President of the Venezuelan Supreme Court of Justice. Mr. Mendoza appears not only on U.S. and European sanctions lists, but also on Swiss, Liechtensteinian, and Panamanian lists. The more countries issue sanctions against an individual or entity, the less likely it is for that individual or entity to engage in regional sanctions evasion techniques. This is particularly the case when the individuals or entities affected are not familiar political figures, but individuals unknown to the public. They become public names once their names appear on a sanctions list and are subject to immediate blocking of their financial assets.

Sanction evasion does not only happen on an individual or entity level but also on a sector level, when sanctions are issued against a specific sector. The main difference is that for sanctions evasion to be successful on a sector level, more coordination with more players involved is required, resulting potentially in much larger quantities and amounts to be laundered if successful.

To understand if multiple sanction regimes from various countries are effective, the following key points should be considered:

Given the narrow focus of European restrictive measures and the larger applicability of U.S. sanctions, it is fair to say, that U.S. sanctions are much more effective in applying pressure than E.U. restrictive measures. Consider the amount of OFAC-related penalties in 2019 issued against financial institutions and other corporations in recent years. In 2019, 97% of the $1.289 billion in monetary penalties were for settlements of Standard Chartered and UniCredit’s sanctions violations alone.

On the other hand, when E.U. restrictive measures are violated, punitive measures depend on the national legislation of individual E.U. member states and have never matched the magnitude of U.S. monetary penalties.

The most consequential aspect in the entire measure of sanctions effectiveness is the ability to punish third parties that are aiding a sanctioned country. This is true not only for individuals but also for companies that are operating in countries where no sanctions are in place against a target. It is the principle of extraterritoriality that makes a sanctions regime effective due to the fact that globalization is such a key component in today’s world. For example, if E.U. restrictive measures prohibit the sale of telecom equipment to Venezuela, goods and services can simply be bought from China, Russia, or any other country willing to do so. However, if E.U. restrictive measures affected trading with these other countries, then the situation would be very different. Both the E.U and the U.S are the largest economic blocks in the world. Any other company in other jurisdictions would not risk giving up access to these economic regions because of Venezuelan oil.

There are approximately 7,500 crude oil tankers around the world. In the case of U.S. sanctions with implied extraterritoriality, every tanker that is carrying Venezuelan oil is risking sanctions. In fact, Washington D.C. blacklisted ships and merchants in June for their role in trading and transporting oil from Venezuela’s state oil company, PDVSA. Also, oil tankers like the Athens Voyager (sailing under the Panamanian flag) or the Chios (sailing under the Maltese flag) were added to the U.S. sanctions list. Because of the current sanctioning of tankers carrying Venezuelan oil, it is becoming very risky to buy Venezuelan oil. In fact, at least 16 tankers carrying 18.1 million barrels of Venezuelan oil are stuck at sea around the globe as buyers shun them to avoid being punished due to E.O. 13884, according to Refinitiv Eikon data. That is the equivalent of almost two months of Venezuelan oil output.

The Recent Maritime Advisory and its Impact on Sanctions Effectiveness

When evaluating the effectiveness of sanctions towards Venezuela, the Maritime Advisory from the State Department and other U.S. agencies from last May could have an impact as well. The Advisory focused mainly on the maritime industry and the energy and metals sectors. It provided guidance to the critical maritime industry players on how to detect sanctions evasion. That would include, for example, shipping companies and insurance companies who insure vessel and cargo.

At the same time, however, it provided the industry with a clear warning that shipping Venezuelan oil will be punished.

As regulators and law enforcement agencies become more sophisticated in applying sanctions evasion and trade-based money-laundering detection tools through technology and location based big data analysis, additional pressure on respective actors and enforcement actions of the maritime industry can be expected.

As we have seen with fines for financial institutions, it is likely that the shipping industry will need to adapt and accept large fine structures for sanctions violation as well. Applying the extraterritoriality of U.S. sanctions through E.O. 13384 and enforcing them might be the most effective tool for forcing change in Venezuela after all.

*Ingo Steinhaeuser has over 25 years sales and consulting experience, which he gained working in Europe and the Americas. Ingo works for Thomson Reuters in Washington, DC and advises financial institutions on risk mitigation strategies. He is a graduate of Mannheim University in Germany.