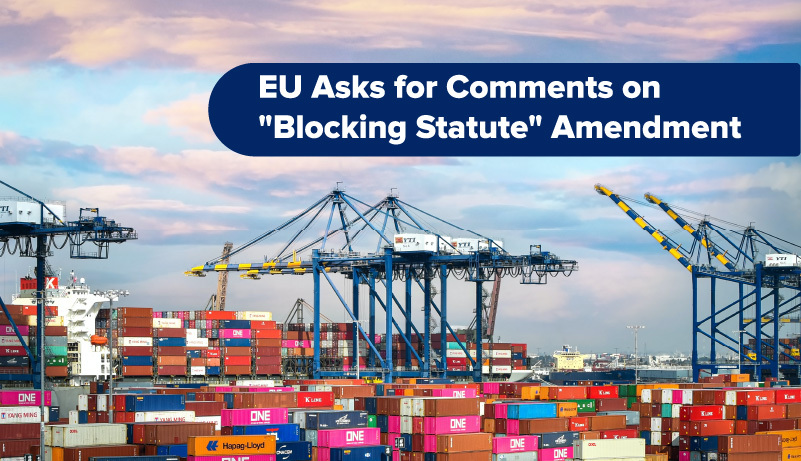 EU Asks for Input for Amendment to the “Blocking Statute”

The EU is seeking input on whether to amend the “Blocking Statute” (Amendment of Council Regulation (EC) No 2271/96) to address the unlawful use of sanctions against its individuals and companies (“operators”) by non-EU countries. The amendment may also streamline the application of the current EU rules and reduce compliance costs for EU operators.

The Blocking Statute was drafted to protect EU operators from having to comply with extra-territorial third-country sanctions, which do not have the authority to penalize their legitimate business transactions. “The application of those sanctions is unlawful,” the EU Commission says in a Combined Evaluation Roadmap/Inception Impact Assessment. The sanctions “produce effects outside the territory of the country issuing them in situations where a connection (or nexus) with the prohibiting country does not exist.”

The Commission says that extra-territorial sanctions, “or simply the threat of imposing them,” have caused significant economic damage. “Certain third countries have caused harm to the EU by imposing prohibitions on EU operators, even when the prohibited activities are purely intra-EU or unrelated to the relevant third country. Not complying with those prohibitions can result in restrictions or even exclusion from that third country’s markets, infrastructures, or the use of its currency.”

The Blocking Statute needs to be reviewed in the light of a changing economic landscape, says the Commission, which includes:

“Non-compliance with such extra-territorial sanctions has become increasingly expensive for at least some globally active EU operators,” the Commission says. “If the EU does not intervene, these unlawful, extra-territorial, third-country sanctions will further harm the economic and geopolitical interests of the EU and its member states, and undermine the EU’s open strategic autonomy.”

Sebastiaan Bennink, Partner at Netherlands law firm BenninkAmar, says the call for input and the potential subsequent amendment will be helpful. “The non-compromising wording of the statute results in direct conflict between the EU and US position, placing businesses in a difficult position of ensuring compliance with EU law, while also seeking to minimize their risk under US extraterritorial sanctions. Hopefully, a reviewed wording will deter third countries from illegally imposing extraterritorial sanctions, while protecting EU operators rather than consequently harming their interests, which is in itself contradictory with the EU Blocking Statute’s raison d’être.”

Bennink said that the initiative is “very fitting” in light of the recent debate around the statute. “This was triggered in part by Bank Melli Iran, Aktiengesellschaft nach iranischem Recht v Telekom Deutschland GmbH, which came before the EU Court of Justice following a preliminary request by the German courts on the application of the statute.”

Bennink elaborated on the case: “Advocate General Gerard Hogan, delivering his opinion, said he regrets the catch-22 that some EU operators are faced with, torn between complying with extra-territorial sanctions of third countries and complying with the EU Blocking Statute. Its ‘blunt’ nature is ‘designed to sterilize the intrusive extra-territorial effects’ of third party sanctions within the Union, but ‘inevitably bring[ing] casualties in its wake.’ It thereby invites the EU legislature to ‘review the manner in which that statute presently operates.’“

Bennink said that time will tell whether the initiative to review the statute will have any impact. “In light of the lack of its proactive enforcement by national authorities and the absence of almost any related proper guidance for private parties, it is a welcome and necessary development for the protection of EU operators and the credibility of the EU legal framework as a whole in standing up to unlawful, extra-territorial, third-country sanctions.”

The initiative is part of the EU’s strategy to, in the words of the Commission’s press office, “better enable Europe to play a leading role in global economic governance while protecting the EU from unfair and abusive practices.” It adds: “This goes hand in hand with the EU’s commitment to a more resilient and open global economy, well-functioning international financial markets and the rules-based multilateral system.”

The amendment to the Blocking Statute is distinct from the Commission’s initiative for an instrument to deter and counteract coercive actions by third countries (Anti-Coercion Instrument), which aims to address practices by non-EU countries that seek to coerce public authorities in the EU to take, not to take, or withdraw, particular policy measures and does not specifically address extra-territorial sanctions.

The amendment focuses on “additional deterrence and counteraction mechanisms” and streamlining the application of the regulation, which includes reducing compliance costs. EU operators are invited to provide their views, identify problems and possible solutions, and make available any relevant information that they may have, including possible impacts.

Stakeholders consulted comprise EU public authorities, EU businesses – including trade associations and foreign businesses active in the EU – research and academic institutions, think-tanks, and non-governmental organizations, international organizations with an interest in the subject matter, and non-EU countries that have a similar outlook or have put in place blocking legislation similar to the EU’s.

Feedback will be taken into account for further development and fine-tuning of the initiative. The Commission will summarize the input received in a report explaining how the input will be taken on board and, if applicable, why certain suggestions can’t be taken up.

Commenting on the procedure, Bennink said: “As a law firm partner representing private parties, the review of the EU blocking statute is a positive development in that it avoids the dilemma that some EU operators find themselves considering the current drafting of the statute: stuck between a rock and a hard place.”

The deadline for feedback is at midnight, August 30, 2021, Brussels time. To give feedback, log in to the European Commission’s web page Give your feedback on: Unlawful extra-territorial sanctions – a stronger EU response (amendment of the Blocking Statute). You can register if you have not already.

Another round of public consultations will be held in the event the European Commission decides to adopt and publish a proposal for a regulation amending the Blocking Statute. A proposal is planned for the second quarter of 2022.

Commenting on the EU review procedure, Bennink said: “Reaching out to citizens is common and is a basic value of the EU. According to Article 11 of the Treaty on European Union, the Commission has a duty to consult citizens and representative associations, by appropriate means, in all areas of Union action.”

The catalyst for the Blocking Statute can be traced to 1996 after the USA enacted sanctions against Cuba, Iran and Libya, which affected EU member states and which the EU considered to violate international law. In response, the EU adopted the Blocking Statute to “protect EU operators engaged in lawful international trade and/or movement of capital, as well as related commercial activities, against the effects of the extra-territorial legislation.”