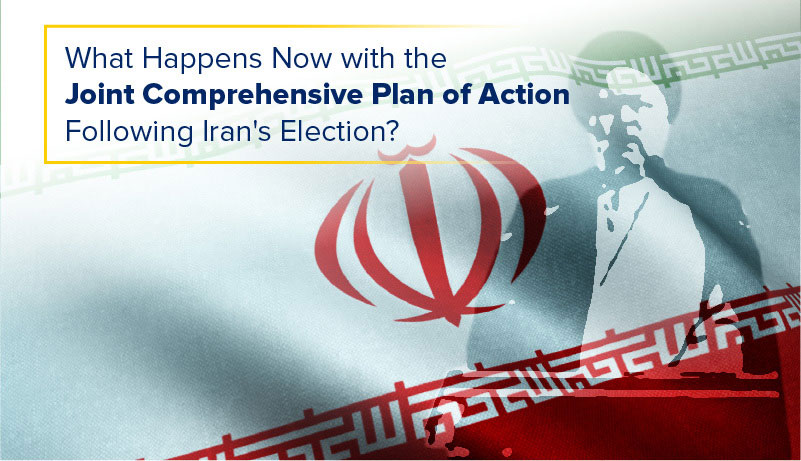 Iran Post-election Update: What Happens Now with the JCPOA?

This article continues from my last one in March, The Biden Administration and Reopening Talks with Iran – What’s in Store? This focused mainly on the reopening of the Joint Comprehensive Plan of Action (JCPOA) and recent talks with Iran, the US, Russia, China, Germany, France and the UK.

In June, Iran’s former judiciary chief and hardliner Ebrahim Raisi comfortably won the Iranian presidential elections. The turn-out was low, and the top reformist candidates and most backing the outgoing moderate President Rouhani were barred from running.

President Raisi supports the reinstatement of the Obama-era nuclear deal, under which Iran agreed to curtail its nuclear program in exchange for the lifting of sanctions.  There are a few road blocks, however.

President Raisi has a record of human rights abuses and participated in the execution of thousands of political prisoners in 1988. In 2019, he was designated under E.O. 13876, for being a person appointed as a state official of Iran by the supreme leader of Iran.

Another roadblock in the JCPOA negotiations is the sunset provisions that eliminate restrictions in a few years. The US and other countries want these to be eliminated so that Iran cannot indefinitely enrich uranium.

Resolution 2231 (2015) stipulates that the Security Council, within 30 days of receiving a notification by a JCPOA participant State of an issue that the JCPOA participant State believes constitutes significant non-performance of commitments under the JCPOA, shall vote on a draft resolution to continue in effect the terminations of the provisions of previous Security Council resolutions.

This basically means that the limitations imposed on Iran’s nuclear and missile programs will, at a certain point in time, expire. For example, on October 19, 2020, the UN arms embargo that had barred Iran from purchasing foreign weapons such as tanks and fighter jets, expired. The US insisted at the time to maintain the ban, while select UN-sponsored visa bans were lifted.

The sunset provisions basically just delayed matters while allowing Iran to continue to enrich uranium, even at low levels. Eventually it maintained a weapons grade amount to produce a nuclear weapon. Iran continues to say that its nuclear weapons program is for peaceful purposes only.

Role of China and Russia

At the time of the JCPOA agreement in 2015, it was thought that China and Russia would remove their support for an agreement if Iran held out for a “no enriching” of uranium condition. What this meant and still does is that Iran uses talk of uranium enrichment, political hardliners and possible war as leverage over the US.

As we all know by now, President Donald Trump pulled the US from the deal in 2018.

Unique Window To Strike a Deal

At his first press conference, President Raisi rejected a push by the Biden administration to expand the deal to include curbs on Iran’s missile program and its backing of the various proxy militias across the Middle East. The US must “lift all the sanctions and show that [it has] goodwill,” he said, adding, “regional issues and missiles are not negotiable.”

Apparently, officials in Washington believe Iran’s supreme leader Ayatollah Ali Khamenei wants to restore the nuclear pact to lift the crushing sanctions that have kept Iranian oil largely off the market. He may give the nod to a new agreement. This would lead to Iran’s moderate government taking the blame for giving in to the US, while on the other hand the incoming President Raisi will get the credit for an economic upswing and not damage his reputation as a hardliner.

A Wall Street Journal editorial stated that the Biden administration has high hopes to resurrect the Obama accord and sign a second deal to restrict Tehran’s weapons program and support for militias in Yemen, Lebanon, and Gaza.

There is only one problem with this scenario, President Raisi has previously stated he has no interest in a follow-up agreement.

Since the election, the geopolitical stance of Iran has been that it has placed all talks on hold in an apparent effort to extract more concessions from Washington. President Raisi’s inauguration comes as Tehran continues to expand its atomic program without the proper supervision of the International Atomic Energy Agency, all the while indicating that it is unsatisfied with the direction of the negotiations. The White House’s failure to enforce sanctions fully, particularly oil sanctions , has given Tehran much-needed financial leeway.

The regime in Tehran is using these developments as leverage to put pressure on Washington for further concessions. Thus, the talks remain at an impasse created by US policymakers.

Iran also has made significant progress in expanding its nuclear program. The clerical regime likely expects Washington to make concessions beyond its JCPOA commitments.

Unless President Biden changes course, Washington’s path is likely leading to a deal that will concede even more. Still, there is the view that it is not too late for Washington to restore leverage over Tehran. Those who favor reviving the deal should understand that salvaging it could require the US to show it is still capable of using appropriate action to deal with the clerical regime.

Compliance officers must watch closely the geopolitical happenings and potentially adjust their respective banks’ controls, making any necessary changes in line with their risk appetite for Iran sanctions. EDD should be kept in mind for any new client onboarding with any possible connection to President Raisi.

*Robert L. Williams III, CAMS, is a financial crimes prevention professional with nearly 20 years of expertise in the sectors of banking, including the U.SAPA, BSA, AML, KYC, and OFAC, at three different foreign banks. He began his career at Credit Lyonnais/CALYON, which eventually was named Credit Agricole in 2002. He then moved on to BNP Paribas where he was the designated OFAC Compliance Officer. Finally, he was employed at Standard Chartered Bank in a Sanctions Advisory role working with the Account Opening/KYC teams and Relationship Managers to mitigate internal and external sanctions concerns. He is a member of the ACSS Editorial Task Force.