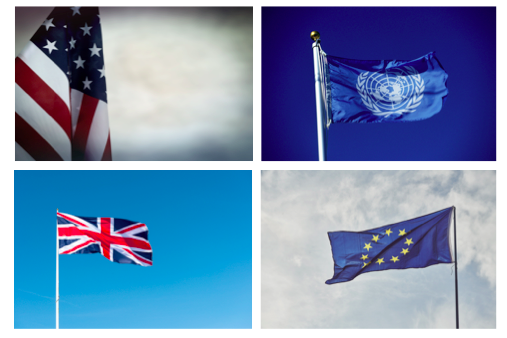 Steady Increase in OFAC Enforcement; A Shift Towards Unilateral Sanctions; A New Focus on International Trade; and much more, according to Accuity.

The global sanctions landscape is in a constant state of flux. From the U.S.’ stern outlook on Iran to the E.U.’s ever-tightening sanctions on Russia, our current global climate is ripe for sanctions shifts and new enforcement actions. In fact, 2019 saw the biggest uptick in OFAC cases since 2014, and the number of individual U.S. sanctions cases last year has tripled since the previous year.

Data software provider, Accuity, noticed this upward surge of sanctions activity and decided to take it upon themselves to collect as much relevant data as possible in order to create a number of useful statistics for the industry. To that end, Accuity delved into the last five years’ worth of sanctions issued by the U.S., E.U., U.K. and U.N. to see if any interesting sanctions trends could be identified that could assist financial institutions and businesses. 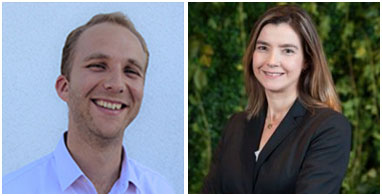 The results of this study were showcased during an international roundtable in London, hosted by Accuity. Speakers Vincent Gaudel, Compliance Expert at Accuity, and Saskia Rietbroek, Executive Director of ACSS, led the discussion and reported Accuity’s findings.

Though some may be more surprising than others, these findings are worth noting for any company that is looking to stay fully compliant with the latest sanctions regulations and ahead of the changing sanctions landscape.

A Steady Increase in OFAC Designations; EU/UK/UN Remain the Same

The Office of Foreign Assets Control (OFAC)’s designations have sharply increased by almost 40% since 2016. In that year, OFAC had 6,000 listed individuals and entities of the SDN List, but by the end of 2019, this number had grown to over 8,000.

On the opposite end of the spectrum, the U.N., E.U., and U.K. lists have remained stable over time. This is largely due to the lessening of sanctions designations under the Iran Nuclear Deal, also known as the “JCPOA effect”. The EU and UK have so far been very closely aligned due to the UK’s marginal use of its autonomous sanctions. However, once the transition period of the UK’s departure from the EU ends in December 2020 (‘Brexit’), this could change if the UK decides to impose its own sanctions.

A Shift Towards Unilateral Sanctions 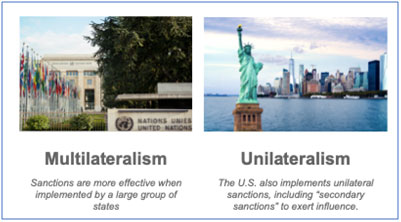 In 2020, here could be some further political shifts that could affect the data, the most noteworthy of which are the upcoming U.S. election and Brexit.

If President Trump wins the election in 2020, this trend of unilateralism can be most likely expected to continue. However, once Brexit is complete and the U.K. departs the E.U., it will be free to align its sanctions policy with any country in the world- including the U.S. Many pundits have suggested that the U.K. and U.S. may form an alliance on this front.

Changes in sanctions lists happen frequently throughout the year, according to Accuity data, and these changes are expected by most regulators to be implemented “without delay”. Often times, this means on the same day that sanctions were issued.

These frequent shifts can pose challenges for compliance suites as sometimes asanctions list change may involve a significant amount of work. Even a small change could require a number of processes in order to account for that change, including: retrieving, formatting, and testing the list as well as rescreening the full customer base and adjudicating new alerts.

The U.S. and the E.U. implement 28 and 22 sanctions regimes respectively, and many tend to be similar. Both the U.S. and E.U. take a tough stance on terrorism, it being the top reason for E.U. designations and the second most common reason for designations in the U.S. (behind Narcotics Trafficking). The main differences center around Venezuela, which has 229 U.S. designations compared to the E.U’s 25 (10x more), and Cuba, which features heavily on the U.S. list, but not at all on the E.U. list. The U.S. also designates 5x more entities than the E.U. in relation to Iran (1,587 vs. 295).

The types of entities that are designated, however, strongly differ between the U.S. and E.U. sanctions regimes. While the U.S. almost evenly sanctions both individuals and businesses on their OFAC List, the E.U. tends to focus more on individuals. Also interestingly, unlike the U.S., the E.U. does not currently designate individual aircraft.

Big OFAC Penalties Are on the Rise, Featuring Iran and Cuba

Since their downward slope in 2016 and 2017, OFAC penalties have made a great resurgence in 2019. As compared to the previous year, which amounted to $71.5 million in penalties, 2019 amounted to a whopping $1.28 billion! This large yearly total has not been seen since 2014, which was mostly attributed to OFAC’s fine of $963 million against BNP Paribas. 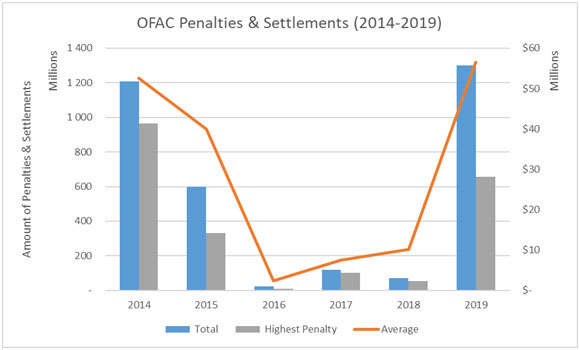 OFAC’s biggest fines in 2019 occurred against Standard Chartered Bank, which was fined $657 million for violations of several sanctions regimes (Burma, Iran, Syria, Sudan), and UniCredit Bank, which was fined $6ll million for violations of several regimes (WMD, Burma, Cuba, Sudan, Iran, Syria, Libya, Global Terrorism). In both cases, OFAC found that the banks did not voluntarily disclose and the violations constituted an egregious case. 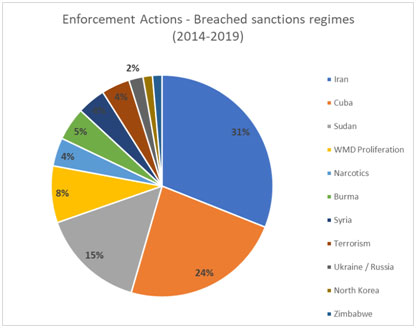 In fact, more than half of OFAC penalties in the last five years have related to Cuba or Iran, with 24% and 31% of all actions respectively. Violations of Sudanese sanctions took the not so close third place with 15% of all action and North Korea violations brought up the rear with only 2% of all actions.

Though Financial Institutions Still Hit Hardest, No Industry Is Immune

Sanctions are enforced against a wide range of economic sectors, as well as non-profits and individuals. These sectors can range from manufacturing of medical devices to a company that provides international travel services. No industry is immune to OFAC’s wide purview.

“OFAC is not a bank regulator”, says Saskia Rietbroek. A look at the companies subject to OFAC fines demonstrates the broad reach of the regulations. Since about fifteen years ago, when the agency first started publishing its fines, companies like the New York Yankees, Playboy enterprises and Wal-Mart settled with OFAC for charges of illegal trading with sanctioned countries or persons,” she adds.

A New Focus on International Trade

According to Accuity data, there has been a sharp increase in the designation of vessels, signaling a new focus on international trade and commerce. This could give rise to even more new challenges for compliance suites as the area of international trade requires compliance from a wide range of actors beyond banks, with uneven maturity and awareness of sanctions issues.

Some of these new compliance challenges could include ascertaining:

In light of the above compiled statistics, Accuity highlights a few areas for compliance suites to watch in the coming year, such as: