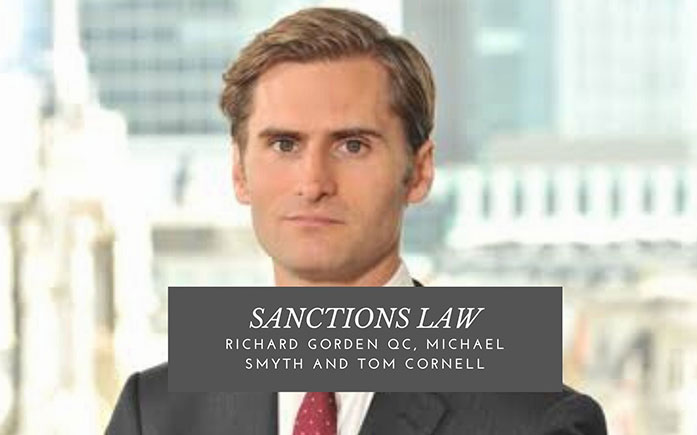 The Association of Certified Sanctions Specialists interviewed Tom Cornell, co-author of the book Sanctions Law. Currently, Tom is an associate at Debevoise and Plimpton LLP, practising from the firm’s International Dispute Resolution Group in London.

Published in January 2019, the book is a user-friendly guide for sanctions law.  Rather than focus solely on policy, it examines how sanctions law is made, how it is implemented and enforced, and how it can be challenged. The book’s other authors are Richard Gordon QC, a senior barrister at Brick Court Chambers, and Michael Smyth CBE, a former partner at Clifford Chance and QC (honoris causa).

This interview discusses the complexities of sanctions law across jurisdictions and how the book can help companies to navigate the evolving compliance landscape.

Association of Certified Sanctions Specialists: Can you provide a brief synopsis of the book?

Tom Cornell: It’s a general book about how different sanctions measures are made, where they come from, how they’re implemented in law and how they can be challenged. The book also considers some of the main issues that sanctions raise for companies and individuals. When we started, we really wanted to address the basics: where sanctions come from and their basis in law, both domestic and international, and then build the book out from that.

ACSS: How did you come to write it?

Tom: I started writing the book in 2015. I was studying for an LLM at the London School of Economics and during that time, I did some research work with Richard Gordon QC. He had worked on some of the key early sanctions cases in the EU courts and had noticed that there wasn’t really a book that dealt comprehensively with sanctions law as an area in its own right. He suggested that we might collaborate on a book and that’s what we did. After I’d signed up to work on the book, another lawyer, Michael Smyth QC, joined us. So the three of us went from there although it took quite a while to put the text together as you could imagine.

ACSS: In a purely practical sense, how can companies use your book?

Tom: The book is a useful guide to sanctions law across multiple jurisdictions. If a company faces a particular sanctions risk, whether because of the nature of its business or the jurisdictions in which it operates, we would hope that the book can serve as a good starting point for understanding that risk.

Although the book provides only a snapshot of the sanctions landscape, it explores what lies beneath the black-letter law, from the political background to enforcement mechanisms and the relevant enforcement history (i.e., how individuals and companies have been fined and prosecuted for sanctions breaches in the past). The book also considers the key cases dealing with sanctions in each jurisdiction. As a result, companies can use the book as a go-to guide for understanding how different types of sanctions (e.g., financial sanctions, trade sanctions etc.) work in practice in each jurisdiction and how they are likely to develop over the coming years.

ACSS: Does understanding sanctions law implementation help businesses in their daily compliance obligations, and how?

Tom: In my experience, yes, it does. First, it is very difficult, if not impossible, to interpret the scope of sanctions measures without understanding where they come from and how they become law in particular jurisdictions. For example, UK sanctions regulations implementing UN sanctions measures must be understood in the context of the UN measures themselves. In other words, without an appreciation of the full context of domestic sanctions law, businesses cannot tailor their compliance programs accordingly.

Second, “implementation” (at least for the purpose of our book) relates not just to the political processes that determine what measures are adopted and against whom, it also relates to the manner in which the measures become law and, ultimately, how they are enforced by domestic authorities. For example, it is important for businesses operating in the US to know that sanctions violations can be penalized by authorities other than OFAC, including the Securities and Exchange Commission.

ACSS: Is there a difference between the jurisdictions as it applies to the creation and implementation of sanctions law?

Tom: Yes – at the end of the day, it’s always a political process, and that process is going to be very different depending on which jurisdiction you’re talking about. At the UN level, for example, you’ve got the Security Council and the five permanent security council members each with a veto, and that necessarily affects the types of sanctions that get passed, and against whom they are imposed. That’s very different from sanctions being implemented unilaterally at the individual state level. In the US, domestic sanctions regimes can usually be pushed through exclusively by the presidential administration – by way of executive order – with little legislative oversight.

When it comes to enforcement, the US regulator – OFAC – has always been a very aggressive regulator, much more so than the UK and EU equivalents. The UK has now set up a similar financial sanctions regulator called the Office of Financial Sanctions Implementation – OFSI. The idea is for the UK to become more proactive in its own enforcement of financial sanctions. In 2019, we’ve already seen a number of penalties imposed. The first penalty was imposed in early 2019 and we’ve had a number of others since then. That’s one example of how enforcement has been different across jurisdictions, but perhaps an indication of how things might change in the UK, at least.

ACSS: With so many layers that sanctions implementation must go through in the UN/EU/UK, does it take longer than the US?

Tom: Yes, it takes longer. It’snot supposed to but, in practice, it can take quite a while. In fact, the UK has introduced certain mechanisms to ensure that the EU process can be bypassed if it is taking too long. If the UN passes a resolution, for example, it can be implemented at the UK level on a temporary basis until the EU implementation process is complete.

By contrast, the implementation of a sanctions measure imposed unilaterally by the US can be extremely quick. In the US, the process is almost entirely political and, as a result, the US sanctions landscape can change overnight.

In short, there are two reasons why the UN/EU/UK multilateral process is slower than the US unilateral process. One: It takes a while for a sanctions measure to make it down from the UN to the domestic level, particularly if it has to go through the EU. Two: The US process is very quick because of the fact that the process is almost purely political; there’s very little legislative intervention. You have the overriding pieces of legislation that govern how executive orders can be passed but, once you have that framework in place, the executive branch can move very quickly.

ACSS: Does that create an issue for UK and EU businesses?

Tom: Yes, it can create compliance headaches for multinational companies. First, the fact that sanctions law is such a fast-moving area, particularly when it comes to US sanctions, means that companies have to be aware of developments that happen all the time and ensure that internal compliance policies are flexible enough to adapt to that change. Second, EU businesses must be aware of potential differences between the EU and US sanctions regimes, even when it comes to the implementation of the same UN sanctions regimes. Obviously there can also be more substantive divergence between the US and the EU – we’ve seen that recently with the US sanctions on Iran and the EU Blocking Regulation. That divergence, and the impact of the Blocking Regulation, are creating major difficulties for multinational businesses.

ACSS: Your book discusses how to challenge sanctions. Is it more difficult to do this in one jurisdiction vs. another?

Tom: Yes, it is more difficult to challenge sanctions in certain jurisdictions. Part II of the book deals with challenges to sanctions measures at the UN, EU, UK, and US levels. For the most part, it looks at how (and how successfully) designated individuals and companies have challenged their own designation (i.e., the basis for their inclusion on a particular sanctions list). These types of sanctions challenges became significantly more viable in the EU following the decision of the European Court of Justice in the Kadi I case in 2008. Since that case, the EU courts have developed a framework for challenging sanctions based, for example, on the failure by authorities to provide sufficiently good reasons for the sanctions designation.

In the US, on the other hand, these sanctions challenges are rare, although a number of decisions have upheld challenges based on due process requirements (including notice and the opportunity to respond). It will be interesting to see what happens in relation to Huawei’s multiple challenges to the sanctions imposed against it in the US. I understand, for example, that Huawei has raised a number of constitutional issues.

ACSS: How often do businesses succeed in these challenges?

Tom: It is important to note that challenging a designation is not the same as challenging a fine or other penalty imposed for breach of sanctions.

Challenges to sanctions designations have been far more successful in the EU and UK courts than the US courts. A good example of a successful sanctions challenge in the UK was the challenge brought by Bank Mellat, an Iranian bank. In 2014, the UK Supreme Court ruled that the sanctions against Bank Mellat were unlawful on the basis that they were disproportionate by reference to their stated objective. Having succeeded in the Supreme Court, Bank Mellat then brought a US$ 1.6 billion damages claim against the UK Government, which settled in October 2019.

If a company breaches a sanctions prohibition (i.e., by providing funds to a designated individual), it may be subject to civil or criminal penalties in the jurisdiction in question. Challenging those penalties is a different question altogether, although again, it depends very much on the jurisdiction in question. This is largely because of the different approaches to enforcement. For example, enforcement of sanctions breaches in the EU and the UK has to date been limited (although this is changing in the UK with the creation of OFSI), with only a small number of fines and convictions for sanctions breaches.