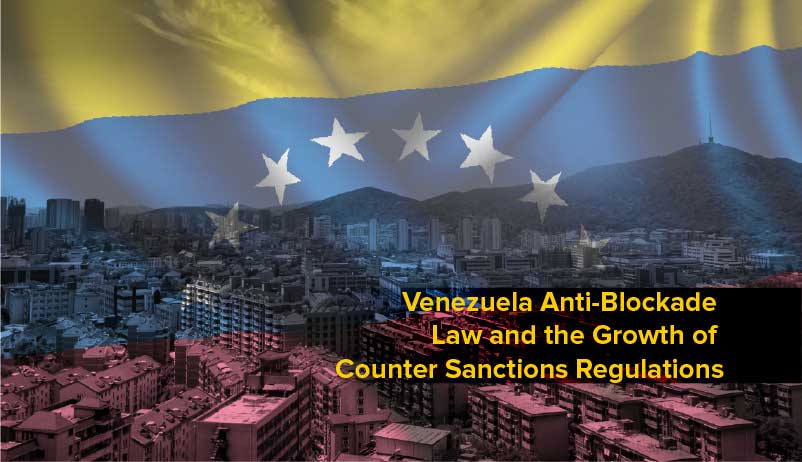 The Constitutional Anti-Blockade Law for National Development and the Guarantee of Human Rights (Ley Constitucional Antibloqueo para el Desarrollo Nacional y la Garantía de los Derechos Humanos), was published in Venezuela’s Official Gazette No. 6.583 on October 12, 2020. This law was drafted as a countermeasure to sanctions targeting the Venezuelan government and certain individuals, mainly those issued by the US Office of Foreign Assets Control (OFAC).

This law has generated controversy since its publication, arising from the discussion of its legitimacy for being issued by the National Constituent Assembly (Asamblea Nacional Constituyente). The assembly’s legitimacy itself, owing to the controversial election, has been denied by the US, Canada and the EU, and some of the law’s provisions have been viewed as pursuing disguised political purposes.

The most important regulatory economic sanctions body globally is OFAC. Its sanctions have incomparable economic and financial repercussions because of the extraterritoriality of the secondary sanctions it issues against persons or entities outside US jurisdiction.

The best-known regulation to counteract the extraterritorial effects of foreign sanctions is the European Union Blocking Statute (Regulation No. 96/2271). This was adopted in 1996 to protect European operators, individuals and companies from extraterritorial sanctions imposed by third countries without jurisdiction to punish their legitimate economic business.

In the UK, owing to Brexit, the EU Blocking Statute was amended by The Protecting against the Effects of the Extraterritorial Application of Third Country Legislation (Amendment) (EU Exit) Regulations 2020. This implemented the blocking regulations into the UK legislation to protect UK persons trading with countries affected by the extraterritorial application of specific laws.

Economic sanctions, as an effective and less costly mechanism to advance foreign policy objectives, are an important aspect of today’s global political landscape. The recent accelerated growth of the implementation, intensity and diversity of sanctions programs has started a global trend of more states beginning to adopt laws to issue their own sanctions and restrict the effectiveness of foreign sanctions.

This trend’s most recent development has been China’s new anti-foreign sanctions regulations. These authorize China to sanction both people and organizations – such as its “unreliable entity” list – and limit foreign sanctions effects, similar to the EU Blocking Statute.

The global trend for each state is to limit the impact of foreign measures and laws on its territory, residents and entities. Even if it does not foresee the possibility of issuing its own sanctions, Venezuela’s Anti-Blockade Law has been heavily criticized since it comprises provisions targeted at mitigating the economic impact of foreign sanctions rather than their strict legal impact. These provisions can be classified as follows:

This law indicates that its provisions are of public order and general interest and that these will be applied at national, state and municipal levels. When it’s necessary to overcome any obstacle resulting from the sanctions, the National Executive won’t apply the laws whose application is viewed as impossible or counterproductive.

Article 15 of the law provides for the creation of the International Center for Productive Investment (Centro Internacional de Inversión Productiva). Since the creation of the center, some measures have been taken toward making international commercialization processes more flexible, such as the Foreign Trade Single Window (Ventanilla Única de Comercio Exterior), aimed at facilitating the procedures for the export of goods.

The previous measures have been heavily criticized for the reason that their intent is to modify the functioning of the state’s structure and processes for political purposes. However, the Anti-Blockade Law has provisions aimed at limiting the effects of economic sanctions within Venezuela. These provisions have not had much comment; yet, they bring this law closer to other international anti-blocking laws.

Article 4 of Venezuela’s Anti-Blockade Law refers to foreign economic sanctions as “unilateral coercive measures.” This definition includes all measures that the United Nations Security Council have not approved. In other words, the law’s restrictions target all economic sanctions imposed by one state (or other non-UN body) against another.

Moreover, Article 6 declares the sanctions targeting the Venezuelan state or its citizens as “unlawful and invalid”, and Article 8 declares the repudiation and condemnation of any unilateral coercive measure and any restrictive measure issued as a form of economic, political, or social coercion of a state toward another state.

By concatenating these three articles, it can be determined that non-UNSC economic sanctions, in general, are illegal under Venezuela’s Anti-Blockade Law provisions.

Disputed Legitimacy of the Law

Despite questions surrounding the legitimacy of Venezuela’s Anti-Blockade Law because it emanated from the National Constituent Assembly, some laws from this body have taken effect in Venezuela – at least at a practical level. Such is the case of the constitutional decree establishing the repeal of the foreign exchange regime and its illicit activities (Decreto Constituyente mediante el cual se establece la Derogatoria del Régimen Cambiario y sus Ilícitos), published in Official Gazette No. 41,452 dated August 02, 2018, by which the historical exchange control was made more flexible.

The Venezuelan economy has had a remarkable change by allowing the circulation of foreign currency within the country and its legal use with greater freedom than traditional exchange control policy. In general, the legitimacy of enacted laws must be taken into account. In Venezuela, such matters are not always black and white.

Venezuela’s Anti-Blockade Law is focused not only on regulating the strictly legal implications of foreign sanctions but also on their impact on the economy. As articles 4, 6, and 8 of the Anti-Blockade Law declare foreign sanctions as unlawful and invalid, organizations should consider the contractual and regulatory effects of these provisions similar to those of the EU Blocking Statute and apply the sanctions risk mitigation strategies as if it were an EU member.

When it comes to Venezuela, the future is full of uncertainty. Companies that want to seize the opportunities that this resource-rich country offers must plan their operations based on the current state of affairs. Controversial as it is, the Anti-Blockade Law is here and its effects cannot be ignored.