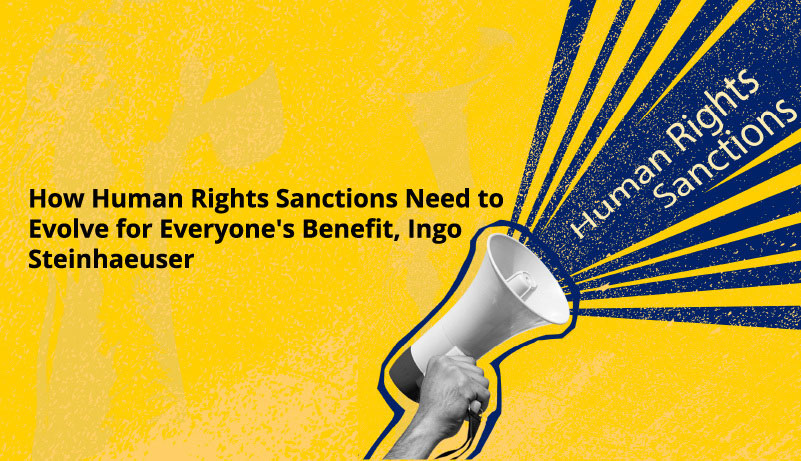 The Global Magnitsky Act is the first global thematic sanctions regime with a focus on human rights. It has the potential to become an effective and consequential enforcement mechanism that can punish human rights abusers and foster behavioral change when its designations are acted on and dealt with by all market participants. These include financial institutions, global corporations, law firms, real estate brokers and other facilitators and enablers.

But do human rights-related sanctions really work? Or are they merely citation-type labels that name wrongdoers but ultimately bear little consequence?

Looking at the current state of the Global Magnitsky Act, four critical elements correlate with its success and effectiveness.

First, information needs to be collected, verified and submitted to governmental authorities. NGOs, advocacies, and media outlets play an important role. Once acted on and sanctioned, the information distribution and discovery work begins.

Human rights abusers, companies and individuals alike can possess ample financial resources to place into the financial system, using layering techniques to disguise their possessions with the ultimate goal of integrating them into the economy. It is the work of data companies, advocacies and research think tanks to uncover those activities and relationships and provide context and content. Then, it becomes possible for market participants who need to comply with these sanctions to obtain a complete picture, including understanding the multiple relationships of those sanctioned.

Finally, international cooperation ensures that information is shared among jurisdictions.

The international community and NGOs around the world have undertaken significant work to make human rights abuses public. Governments rely on the work of human rights organizations, as they possess sophisticated data analysis capabilities and digital platforms that collect, structure, organize and visualize verifiable information. With an enforcement mechanism in place, the collection and submission of information to authorities have become key in the unmasking of human rights abusers.

The NGO Liberty Shared, for example, has created a sophisticated platform called the Victims Case Management System, which allows victims to upload information. The Business Human Rights and Resource Center in the UK tracks more than 20,000 companies on their human rights-related performance and has created a digital platform where articles and location information are stored. Integrating such data into any supply chain risk assessment helps to ensure that organizations with a track record of abuse are marginalized.

For a human rights-related sanctions program to make an impact, the process of distributing sanctions information to market participants needs to be expanded and the granularity of information needs to be enhanced. This is of foremost importance, as it ensures that those sanctioned and their assets – be they connected businesses, real estate holdings, or other corporate participations – are equally known.

In the US, Magnitsky sanctions include the 50% rule. “Property and interests in property of entities directly or indirectly owned 50% or more in the aggregate by one or more blocked persons are considered blocked regardless of whether such entities appear on OFAC’s Specially Designated Nationals and Blocked Persons List.”

Government authorities do not have the capabilities to build complete ownership structures. But data providers and research think tanks possess specialized resources and can collect this information.

One example is the Xinjiang Production and Construction Corporation (XPCC), sanctioned by the US government under Global Magnitsky in July 2020. XPCC is perhaps the most prominent company name that appears on the list. Data providers have been quick to find XPCC has many subsidiaries. The UBO research firm Sayari, for example, identified over 800,000 entities connected with the Xinjian Corporation, either through direct or indirect holdings, including minority, majority, control and non-control positions, making the designation of XPCC one of the largest in sanctions history.

While companies and financial institutions still rely on internet search engines such as Google to conduct due diligence, this often produces mediocre results. First, Google produces a lot of output that is time-consuming to sort out. Search engines uncover many false positives, which often include multiple hits for the same content. It can be difficult to determine true adverse events and to verify a subject’s identity. The results also might miss significant risks not contained in mainstream news sources.

Third, criminals can pay Google or other service providers to delete information from websites, such as aggregators. Search engine suppression is a tactic that includes creating positive content so that negative content is harder to find.

Adverse media solutions can play an important part, as they are powered by artificial intelligence and include proprietary databases and other criminal records, such as records from local law enforcement authorities that would not be visible in a Google-type search.

With the Magnitsky Act passed in almost every major Western democracy, actors will have difficulties moving assets to destinations where legislation is similar and financial institutions follow a unified set of rules. Differences exist, however, in the due diligence programs of financial institutions.

A global financial institution, with a banking license in the US, for example, needs to comply with US regulations and subsequent enforcement. A local European financial organization, say, in Spain, needs to comply only with European law and has little to fear from US authorities about any kind of wrongdoing.

International coordination of sanctioned entities is needed for maximum effect. If an individual is banned under the US Magnitsky Act for human rights violations, the program should have reciprocity so that independent due diligence is conducted on the same individual elsewhere. While this type of information-sharing would not guarantee the sanctioning of that individual or enterprise, at least the case would be heard.

The European Magnitsky Act includes travel bans and asset freezes as restrictive measures. Unlike US law, the European Magnitsky Act does not include corruption as a criterion for sanctions. Reciprocity should most certainly include all actors sanctioned for serious human rights violations, like crimes against humanity, genocide, torture, and other cruel, inhuman, or degrading treatment.

While travel bans are orchestrated by member countries, asset freezes are conducted by financial organizations. Not every institution that moves assets will be able to freeze assets and use the same due diligence that large financial players typically exercise.

If other offshore banking havens also implement Magnitsky Act-type sanctions, then significant progress will be made. As part of the UK Magnitsky legislation, for example, British overseas territories have followed the lead of the UK and implemented them. Guernsey, Jersey and the Cayman Islands will freeze all accounts in their jurisdiction if an entity is sanctioned in the UK. The same is true for Gibraltar.

The Global Magnitsky Act has shown it is an effective tool in combating human rights violations and corruption. It has been a foreign policy objective from Russia’s President Putin to have it repealed. Despite both China and Russia actively trying to undermine the act, there are many examples where behavioral change was achieved, among them:

Unlike previous sanctions that targeted countries such as Iran or North Korea, it is now possible to go after human rights violators, even if they are from a country considered an ally. This puts pressure on business partners of sanctioned entities, such as in the Gertler case, as they face the risk of being sanctioned as well.

If the visibility of abusers and their business partners is increased, and if Western democracies are aligned in their fight against those who undermine human rights, those who are exploited for financial gain clearly stand to benefit – as does the integrity of supply chains and the financial system overall. Who wants to do business with a human rights abuser, after all, if the abuser is known to the public?

The risk of conducting business with a sanctioned individual or company is measured not only by regulatory standards and enforcement mechanisms such as the Global Magnitsky Act but also by this information being in the public domain. Ultimately, this might be the greater risk. Publicly traded companies could face public relations disasters and a risk re-evaluation from investors and shareholders, resulting in loss of revenue.

There is a significant reputational risk that leads to financial risk when such violations occur. Environmental, social and governance-related disclosures are gaining acceptance as a universal risk category, particularly in the emerging social category, where human rights-related factors are often made public.

How further human rights issues are dealt with will lead to more clarity. Creating transparency is very likely the biggest driver of behavioral change in human rights-related wrongdoing.

Ingo Steinhaeuser has over 25 years sales and consulting experience, which he gained working in Europe and the Americas. Ingo works for Thomson Reuters in Washington, DC and advises financial institutions on risk mitigation strategies. He is a graduate of Mannheim University in Germany.